Rival Consoles is the recording project of London-based producer Ryan Lee West. His latest record is Now Is, which is out now on Erased Tapes.

I first listened to Nine Inch Nails when I was at school, around the ages of 12 to 15, which would have been the mid- or late 1990s. I think the first videos I would have seen were “Wish” and “Head Like A Hole” on MTV2 — the latter of which I instantly loved because it was catchy, very heavy, but also had this weird dance music groove and production that I hadn’t heard before (or, at least, that I could only connect to the gritty heavy dance style of The Prodigy).

It wasn’t long before me and my friends were obsessing over the irregular time signatures of “March of the Pigs,” the punk aggression of its stark, basic music video, and the weird, explicit sexual nature of the “Closer” video. At some point the same year, a stoner friend of mine showed me the Downward Spiral album in full, and I immediately became obsessed. I bought it on CD and listened to it to death for the many years that followed.

For some context: I had only been playing guitar for a few years at that point and was playing Radiohead, Nirvana, Smashing Pumpkins, Deftones, etc — so The Downward Spiral was totally wild compared to anything else I had been listening to, and changed how I understood you could write music. At that point, I hadn’t thought about music production — I just thought music was made with instruments and recorded and it sounded like how it was played. But listening to NIN started to shift my awareness of this, and I became cognizant of all the ways you can treat and shape sounds.

I’ve always loved that the record cover itself portrays the sounds on the record: the dirty, smudged, and degraded textures. The distorted guitars on this album are like white noise, more so than any others I’ve ever heard. The opening of “Mr Self Destruct,” sounds like 20 distortion fuzz pedals slamming out of the speakers. This kind of abrasion happens across the record in tracks like “Heresy,” “March of the Pigs,” “Big Man With a Gun,” and “Eraser.”

It isn’t just aggressive though; there is softness, and vulnerable, broken-sounding moments happening everywhere. Take for example, the middle section of “Mr Self Destruct” — a ridiculous change of dynamics, from violent distortion to a very basic and quiet bass line — or the almost cabaret-style piano break section in “March of the Pigs, which is so unexpected that it almost sounds sarcastic. Even the main acoustic guitar in “Hurt” has this gentle stuttering sound, which makes it feel on edge and unstable — almost to the point of undermining the song, but due to the vulnerable nature of the lyrics, it all ultimately makes sense. “Ruiner” was also a favorite of mine because of its ultra strange lofi guitar solo section, which all of a sudden sounds like the quality of the record has changed. I’d never heard an idea like that before. I’d heard music that seemed to not want to disrupt or distract from its own sense of self, but here it sounded like they’d forced a mistake into the composition. I think these bold contrasts are what set this album, and NIN in general, apart from many other industrial artists.

The melodies at the end of “Piggy” and “Closer” are almost nursery-rhythm-like in their simplicity, and have really stuck with me over the years. There is something so powerful about a soft, simple melody appearing as a climax, as opposed to a heavy, loud one. This, to me, is more confident and creative. The end of “Closer” influenced how I treated the end of my song “Odyssey 2013,” which has a similar sense of reversal and degradation moving around the stereo field.

Another adored track on The Downward Spiral is “A Warm Place,” which has this beautiful, dreamlike softness to it — important breathing room on the record. Again you find a catchy, very simple melodic idea that achieves so much. I think this approach Trent has is one of the reasons why he has become very good at film scoring; if you look at the melodic ideas in The Downward Spiral and then look at “Hand Covers Bruise” from The Social Network, you can see the same principles at work. They are powerful because they have a lot of space for interpretation. I think unconsciously, “A Warm Place” influenced pieces I have made, like “Untravel” and works found in Overflow.

As a teenager, I remember being so interested in little details such as the ambient tonal sounds in “Piggy”’s chorus. There are these haunting, breathy noises, and animalistic kind of screams. Are they from birds? It’s unclear what could have made them. There are weird, distressing sounds across the record — like the screaming on “The Becoming,” which again sounds indistinguishably human and animal. The title track has an insane section that sounds like it’s coming from a different room — possibly a torture room? They’re very unexpected choices, and yet they all coalesce stylistically into a kind of background mood of the record.

There is a lot of emphasis on anger, violence, pain and sex across the album. I think as a teenager, I really connected to the outsiderness of the record’s lyrics, and the frustration they illustrated. I always thought of the disturbing lyrics as a kind of character-based perspective — which was very inspiring, as I hadn’t really experienced that approach to writing before. This record was also the first I’d heard that explored ideas of fetishization in music, made more concrete by the video for “Closer” and what Trent would wear on stage and in press shots. I think that was important to me; I liked the freedom it expressed.

One of the most disturbing lyrical and musical ideas can be found in the chorus of “Closer”:  “I wanna fuck you like an animal/I wanna feel you from the inside/I wanna fuck you like an animal/my whole existence is flawed/you get me closer to God.” These lyrics alone are disturbing, but they’re made extremely insane in their juxtaposition with a kind of hysterical, bizarre circus-esque flute-synth — which in the background of the second chorus, almost undermines the severity of the song. I can’t think of such a weird combination of ingredients in a chorus, especially given that this song is also very popular!

The Downward Spiral  is bold in almost all possible aspects. It is wild and gritty, but it also has delicate, gentle moments. The sheer amount of sonic variation, of color and texture, is amazing, and it creates a complete mood that feels real. It sounds like an exploration of what is possible in songwriting, and what ingredients can be used — including the ugly, the disturbing, and the jarring. It is a lesson in daring to try things, and distilling so much conviction into these bold choices.

Rival Consoles is the recording project of London-based producer Ryan Lee West. His latest record is Now Is, which is out now on Erased Tapes. 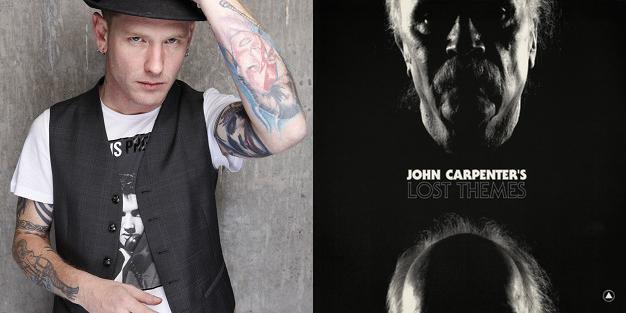