I’ve started and re-started this piece a dozen some-odd times now and I’m starting to pull my hair out.

Basically, what I want to talk about is Boston and the influence Bane has had there without sounding too jaded or like a know-it-all. The fact of the matter is, the hardcore scene is a fickle beast. Like anything with such a far reach, it’s a fertile plain ripe with conflicting philosophies, certain flavors of the week, and immovable monoliths. Bane, for better or for worse, is a kind of monolith, built to stand the test of time and serve as a benchmark for incoming flocks of neophytes. Their footprint is relatively small; Don’t Wait Up is their fourth and final long player — released, along with all of their other albums, on Equal Vision Records — and they were active for just shy of two decades (their debut album, It All Comes Down to This, was released in 1999, but they were doing shows and releasing singles well before its release).

Politically speaking, Bane operated out of the same youth crew wheelhouse as Gorilla Biscuits, Slapshot, Chain of Strength, In My Eyes, et al. Lots of gang vocals on recordings  that effectively functioned as stage direction for choruses of rowdy kids at their shows, which incorporated an element of preaching from lead vocalist Aaron Bedard. Bedard’s interaction with a crowd was more preacher than performer, and his sentimentality with regard to straight-edge principles usually appeared in the form of personal anecdotes. An emphasis on building a strong community and maintaining a positive mental attitude characterized Bane’s ethos and ignited their live shows. The fact that they’ve decided to call it quits is kind of sad, but in the same way as finding out your favorite teacher in high school is retiring. Their influence is noted and their torch will undoubtedly be carried on by members of the community they had a huge part in establishing.

For those of us who cut our teeth in the Boston hardcore scene during the last two decades, Bane is an institution. For me, their influence dovetailed with my interest in starting bands with my friends, recording and releasing our own music and playing shows for the first time. I was lucky to live in a community that weighed the significance of art very heavily, and I like to think I’ve never taken that for granted. Bane isn’t a band I’ve followed extremely closely throughout the years, but their legacy is one I nonetheless admire, and when I saw that they were releasing their final album, I felt compelled to say something.

I must have seen Bane on purpose or by accident dozens of times through high school and college. It wasn’t uncommon for them to share the bill with other New England hardcore bands that they had a kinship (even members) with like, Converge or Dropdead, as well as bands with kids my age in them like Have Heart and Guns Up. I always appreciated how Bane existed in relatively the same capacity throughout their career: completely capable of headlining their own bill, but not unwilling to be the opening act for kids half their age. They must have known on some level that they were humbly providing milestones for kids who had looked up to them. In general, that kind of behavior doesn’t show up in the music industry very often.

It’s a little strange to see a band like Bane call it a day. Even when I wasn’t into their records anymore, I kept on liking bands whose message was similar: DIY ethics paired with not being an asshole and helping others when you were lucky enough to be able to.

I guess I should talk about the album. I don’t know. That’s sort of the thing. It’s not really about whether or not I like the album. I don’t know if I’ve loved or even liked a collection of Bane songs since Holding This Moment, a compilation album from 1998 that collected their early singles and predates their “official” debut. To be honest, I heard about this final Bane album and I just was instinctually like, “I should write about it for the Talkhouse.” And then I saw the artwork and I knew it was by Dan McCarthy, another Massachusetts stalwart, and it added this whole new dimension to the damn thing. It was so obviously McCarthy’s work that in conversation with friends who are huge Bane fans, I just nodded toward it as if it was just universally understood. But in case you don’t know Dan played (plays? Shit, I don’t know. They haven’t updated their website since 2008 so probably “played” is the right word here) in this band called Helms. He played drums. They’re fucking awesome. In an alternate universe, Helms is the band people talk about when they talk about Sonic Youth in this universe. They share absolutely nothing in common with Bane outside of all the community stuff I was talking about earlier.

When I saw the Dan McCarthy artwork it was like this nearly hilarious beacon, alerting me to pay attention. I don’t even know how to talk about it, but the short story is, I was way into screamy hardcore jams for a long time, goddammit. That led naturally into a love for your classic post-hardcore situations and what have you and riffs that incorporated harmonics and letting the bass player have access to a couple of effects pedals. Barreling down the rabbit hole and the next thing you know, you’re adding nonchalant saxophone solos to a song with a time signature based on your phone number and you join Dan McCarthy’s print-of-the-month club and you see Helms and they’re somehow all playing one instrument at the same time and you’re like, “Fuck, this is it! This is music, you goddamn maniac!” And you move to New York and you have the Dan McCarthy print hanging up on the wall and then fucking Bane releases their final album and Dan McCarthy does the artwork for it and it’s nearly this massively poignant thing… like, deus ex machina-type shit.

Because these weird worlds collide, you know? Imagine if those two roads that diverged in a wood that Bobby Frost was talking about met up and it turned out they just wound up at the same place anyway… that was kind of the way I felt when I saw the Bane album and there was this McCarthy element. It’s just become this symbolic thing for me personally. I realized at that moment that Bane kind of hit the nail on the head that I personally would be excited about, which was this kind of sign-off that incorporated these two completely different facets of the hardcore punk scene all neatly wrapped up. It didn’t matter to me if I even liked the album, I was just charmed by their exit. 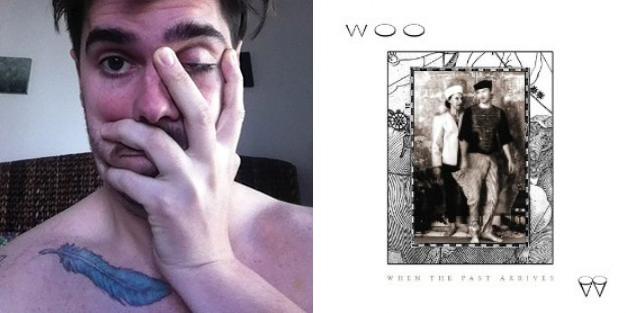 Sean Yeaton (Parquet Courts) Talks Woo’s When the Past Arrives