Brendon Small is a director and stand up comic. He’s also the creator, writer, and musician behind the animated series Metalocalypse and Home Movies and the band Dethklok. Look for the album Galaktikon II: Become the Storm and the Galaktikon comic from Albatross Comics. (Picture by Jim Donnelly.)

I love animation. I’m known for animation – Home Movies and Metalocalypse are my babies. But my first love is live-action – there’s something more social about it. Being creative as an animator is logging lots of hours alone, so live-action really excites me because it means getting behind a camera in a room and working together with a huge crew and actors. And not just looking at a monitor, clicking and dragging characters onto a background.

I don’t think I’d be where I am today – or even have sought out a creative career in show business – had my mind not been awakened by seeing Mike Hodges’ Flash Gordon in the theater in 1982. I was seven years old and I think I remember my aunt being there – but I might’ve made that up. What I do remember for sure was pulsing, dramatic, dazzling music by Queen, comic-book pages whipping before me, and punchy colors, spaceships, laser beams, robots – ahhhhh, my brain just exploded! Seeing all of that on the big screen ignited something inside me that, whether I like it or not, I’ve been trying to recreate in one way or another for years.

In 1979, I saw Disney’s The Black Hole. Somewhere around the same time, I saw Star Wars, and later The Thing … I didn’t realize it until later, but I was born into a golden era of sci-fi and fantasy. I would creep downstairs and watch Conan the Barbarian in the middle of the night. I would get excited when I had nightmares about Salem’s Lot. A few years later, I’d be mesmerized and consumed by David Lynch’s Dune and Tobe Hooper’s Lifeforce … Meanwhile, the only animation I really cared about was classic Disney movies or (even better) Ralph Bakshi joints like Fire and Ice and American Pop.

These are the things that ignited my brain – bold, exciting colors, dramatic music, otherworldly characters and heroic journeys. The visuals, the (pre-CGI) practical FX, the tactile quality of the model ships. These ’80s era sci-fi and fantasy movies featured believable filmic landscapes, worlds I wanted to live in, and hit me on a subconscious level and just wouldn’t leave my mind.

Flash forward to a year ago. I was putting the finishing touches on what would become Galaktikon II: Become the Storm, a high-stakes heavy metal opera. I knew I needed to make some kind of promotional video and after listening to Roger Corman’s interview on WTF, it hit me: I was going to figure out how to do everything my favorite films did, and make an awesome music video. The Corman interview helped me to understand that, with some specific planning and very hard work, if I dreamt it, I could make it. And not only that, I could maybe even make it look great, and not break the bank in the process.

I immediately called my brother Jeff, who’s been a makeup artist in the industry for 15 years, excited to finally have a reason to work with him, and we set about making my Galaktikon record (and subsequently Galaktikon comic book) into a live-action reality.

Soon after, Jeff started constructing the helmet for the lead character, Triton, an off-kilter space hero inspired by Charles Grodin’s romantically challenged character from The Heartbreak Kid (in the comic book we meet him just after he’s been served divorce papers), who wears a helmet and an exoskeleton, combining the looks of the Phantom from Phantom of the Paradise and Ultraman. I started preparing to make my Galaktikon movie by obsessively rewatching every single sci-fi film from the late ’70s to mid ’80s I could get my hands on, spending months zeroing in on what visuals were making me feel something. And I knew with enough planning we could achieve these looks. But I needed a philosophy to guide me.

I thought about Lars von Trier and his “Dogme 95” manifesto: creating with restrictions. Very clever – in fact, it’s often easier to create without having every single option in front of us. So, in order to keep my integrity to the era intact, I coined the term “Corman 82”; anything Roger Corman could do in 1982 (although really it was more like 1978-1986-ish), I could do.

With Corman 82, I was shooting digitally rather than on celluloid, however, I could ape that look (and thus the feeling) of that hazy effect you would get in certain old-school analogue FX shots. So every time we would put the spaceship into a background shot, we would add grain or haze or some smoke to evoke the look of films like Blade Runner, where Ridley Scott’s use of atmosphere, haze, anamorphic lenses, and light sources everywhere is amazing. And guess what? It worked. 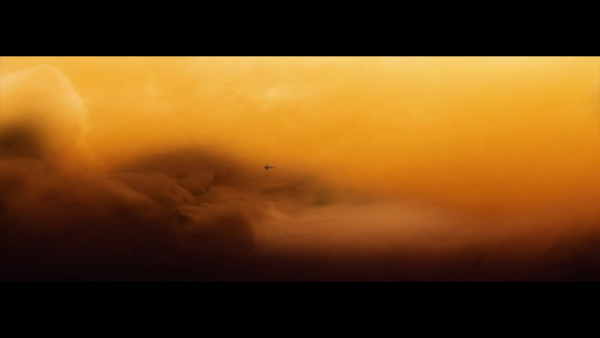 My friends at Shout! Factory sent me a copy of Message from Space, an odd 1970s Japanese-Italian coproduction, where I found a highly rip-offable shot of a laser whip (!) falling into frame. I knew I’d have to recreate that.

I love Tobe Hooper’s anamorphic lenses, from Funhouse through Poltergeist to Lifeforce. His moods and practical FX may have been the biggest influence on me. In fact, while watching Poltergeist (yes, my favorite horror film of all time), I nudged my brother. I paused the scene where JoBeth Williams is thwarted by a lanky creature guarding a door and asked my brother, “Why does that look so cool? How did they make it move so smoothly?” My brother said, “I bet they shot it underwater.” So that’s what we decided do. My brother fabricated a “six-eyed space whale” crossed with a samurai fighting fish with long flowing tendrils so that we could film underwater in an aquarium. And guess what? It worked. Thanks, Tobe Hooper!

Ridley Scott opened Alien with a very slow shot of a spaceship that when measured against gigantic planets would give the illusion of fantastic scale. I thought, “I don’t need to have a crazy fast ship to make the scene look interesting.” So I did that same slow shot for the ship in Galaktikon, and guess what? It worked. Thanks to my practically best friend, Ridley Scott!

And for the sci-fi/fantasy skies, I went back to my beloved Flash Gordon to study the craft of the (fairly) lost art of ink tanks. Ink tanks are large aquariums that are filled with different combinations of colored liquids with different viscosity that create the illusion of clouds, as seen in Close Encounters of the Third Kind, Raiders of the Lost Ark, Poltergeist (of course!) and Barbarella. We taught ourselves to make ink tanks in my back yard, and filled an aquarium with different colored liquids to create an expansive, billowing multi-colored cloudy sky for our sci-fi realm. And guess what? It worked. Thank you, Steven Spielberg, Tobe Hooper, Roger Vadim and, of course, Mike Hodges!

Ultimately, Galaktikon: Nightmare was a short film driven by my own music – but I wanted that music to stretch out over the whole seven-and-a-half minutes of the movie. I love John Carpenter’s synthesizer scores, and thought writing more music inspired by them could be cool. So I did that, and guess what? It worked! Thanks, John Carpenter, my best friend.

I think it was my friend Pat who told me some quote he’d heard about SFX: “CGI looks real, but we know its fake. Practical effects may look fake, but they feel real.” I totally agree with this. I’m dying to get lost in a movie. I’m dying to let a strange story enter into my subconscious. I’m dying to experience a waking dream. And practical effects pioneered by my heroes are a fucking fantastic weapon to have in my arsenal. I hope so much that I can use everything I’ve learned from this project as soon as possible, and make something bigger and better, a feature whose fantastical use of character, story and visuals will straddle that magical line between the worlds of the conscious and the unconscious.

Thanks for listening to this nerd blab!

Brendon Small is a director and stand up comic. He’s also the creator, writer, and musician behind the animated series Metalocalypse and Home Movies and the band Dethklok. Look for the album Galaktikon II: Become the Storm and the Galaktikon comic from Albatross Comics. (Picture by Jim Donnelly.)