Since you so kindly shared your views on all of the heathens that aren’t like you, I thought I would share some of mine.

I’ve always wondered about small minds like yours. Minds that are aggressively determined to be below average. Minds that refuse to grasp that the world is wildly varied and that women are as good as you. What on earth would make you think you are superior to so many? Maybe you have to keep deluding yourselves because the long reign of misogyny has a serious tick-tock target on its back and it’s freaking you the fuck out.

Does it make you as a man feel bigger when you tear down a woman of substance? Admit it, right, you get a little thrill. You seem to. You feel so clever. A regular Oscar Wilde, in fact. Or is it merely that women like Michelle Obama and Hillary Clinton have an intellect so gargantuan that you are way beyond your depth? My instincts tell me that you are just smart enough to know that you’re not smart at all. And it burns you up, doesn’t it, Scott?

Your Type™, and let’s be real, you are a Type™, are always filled with the most fear. The ones always yelling about their strength are the most scared. All it takes is a woman who is superior to you in achievement and intellect and you go wild with the rage of a spoiled bratty toddler in full meltdown mode.

I’ve spent a lot of time thinking about male terror. This should not be a verboten subject. Women are dissected ten ways from Sunday for the smallest intransigence. Male terror — and this subject is a big one, Scott — is killing us. You need to know that if a woman gains traction, it won’t make you fall back. Those places where you hide in your fearful mind aren’t real, they are just old stories of a pretend world that never was; your Type™ just wants it to be so.

My boyfriend is Puerto Rican. He had a very astute observation the other night when a guy we were with said he “wished it were the 1950s again.” My boyfriend told him he’d only ever heard white men say that. It was as if a collective light bulb went off at our table.

I know, Scott, that you and your Type™ long for the 1950s, when white men were assured of their place in the world. It looks different now to what your narrow view is. It’s bigger than you could conceive and that just makes you hold on tighter, and kick out at women harder. But it’s ugly, Scott. It’s really ugly. Trying to make the world look like your ignorant idea of what it is won’t work. You must adjust to the fact that your dominance was always an illusion peddled by your Type™ to benefit your Type™.

Are you really that scared of us, Scott? Maybe you should be. There are more of us, after all.
It’s almost like you can feel us kicking the La-Z-Boy recliner out from under your ass.

Do you feel it, Scott? There’s an army of thought coming for you.

I and many like me are aiming to change your way of life, not because we give two fucks about your life, but because we care about ours. We have s*** to do and ground to gain.

I’m sorry your way of life is tick-tocking, Scott. Can you hear it? So many of us know what you are determined to ignore… it’s going to go boom.

An explosion of the mind is EXACTLY what’s called for! Let thought in. If you could only see what is on the other side of an open mind, Scott and co., I think you’d join us. It’s beautiful here, it’s free and the views are incredible.

All you have to do is leave women alone, starting with our bodies. Stop hating us. Stop harassing us, stop belittling us, stop stonewalling us, stop subscribing to the notion that you are superior, because you aren’t. It’s hard to wake up from a nice dream, but you have to. It is not a choice that’s up to you.

So get out of our way. Stop your cruelty. Have some class. Have some heart. I know you won’t. I know you can’t. But, oh, I wish you could see what we the free can see because damn if it isn’t beautiful.

If you can’t open your mind, at least stop hurting us, because if you slander one woman, you slander all.

P.S.
Much respect for Tamron Hall for pushing back at hate.

opThe video says it all.

The above was originally posted on Rose McGowan’s Facebook page. It is republished here with permission.

Election 2016
politics
Rose McGowan
Scott Baio
Talkhouse Holiday Playlist: Chris Farren’s Christmas Favorites
Juliana Hatfield Battles with Herself over Whether or Not to Sell a Personal Note from Kurt Cobain 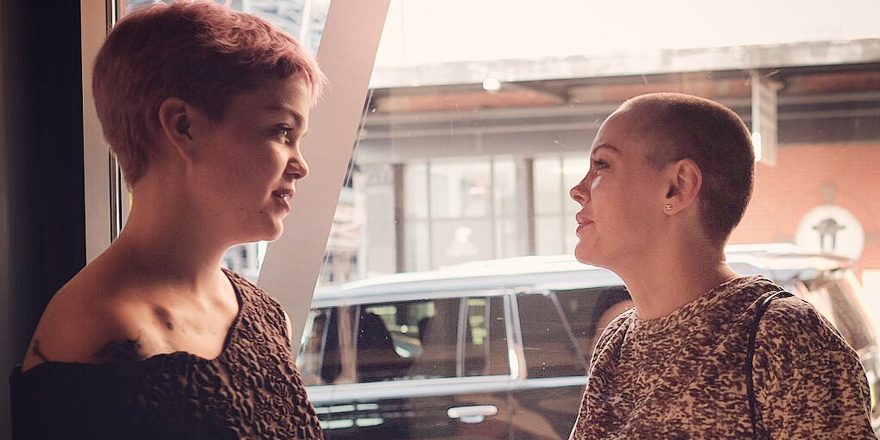