Pearly make music and videos that inhabit the same shapeless realm of dark Americana as David Lynch, while pulling from a diverse set of references to make their sound. Based in Cleveland, Ohio, the three-piece band’s sound morphs from sweet, indie rock tenderness, akin to bands like TOPS, to screeching, dance rock aggression equated with acts like Nine Inch Nails. Pearly is songwriters Austyn Benyak, Josie Yeager & drummer Dalton Edwards.

We wrote and recorded our album Silver of the Mirror in 2020 after our first tour. We did a lot of night driving on that tour. The way that certain music sounds while driving across long, empty roads in the dark, middle of the night, is extremely special to us. We have always correlated that energy with what it takes to make a good “movie song.” When we wrote Silver of the Mirror, we wanted to put together an album that, in its entirety, could be used as a movie soundtrack. We wanted to create something that had enough depth and variety and was somehow still vague enough to be ethereal. For it to have enough meat to grab onto and evoke a strong mood, but be open for any experience or story to be applied to it.

The way that Pearly writes is unconventional. We don’t “jam” and we do not wait for songs to be structured to record. Our writing style is as experimental and lucid as it is a consequence of being amateur. We are also two people attempting to create as a single entity, which requires a certain amount of privacy from each other when writing. Some of this stems from the insecurities of being unskilled instrumentalists and our learning-as-we-go approach, but also, this requirement of privacy maintains the “single entity” that Pearly was created to be. For instance, one of us will go into our home studio and start a song, recording as we write, and then at a later date, the other will access what was recorded and add to it. It’s still technically a collaboration, but we are usually never creating in the same room at the same time. This keeps intact the intimacy of writing a song completely alone that we would like to express through Pearly. Since we do not consider ourselves incredibly proficient instrumentalists, a lot is written by ear or “putting our fingers down onto the instruments until we like what we hear.” We’d like to think that what we lack in intent through technical skill, we make up for in our ability to express ourselves through sound, an openness to creative energy, and being ambitious listeners of music that moves us. The approach we take to harnessing inspiration is vital to our abilities as musicians. Without it, we’d be lost.

We are incredibly visual people. When writing, we tend to go on drives a lot; preferring, most of all, the way music makes us feel when listening in the car, cruising. The act of going on a drive to listen to music adds that visual component we crave. Sometimes, when we write, we will even pull up any random, muted video to listen back with what we have so far. The movement adds so much for us. It keeps us moving forward in the process of finishing a song too.

When writing Silver of the Mirror, we considered our love for visuals and began thinking a lot about movie soundtracks. One that stood out to us in particular was David Lynch and Trent Reznor’s soundtrack to the movie, Lost Highway. We are as much fans as we are creators of music, so the tracklist was enough to get us excited. But when we actually listened to the soundtrack in full, we found a part of ourselves in it. It was so much of what we were trying to do with our first EP, Prettydarksexymusic. It was dark, heavy, soft, and extremely sensual. The space that is left inside of the songs left us uncomfortable, and almost every genre we pull inspiration from is included: dark jazz and blues, Americana, industrial metal, rock, and dream pop. The variety of sound was interesting to us because it was so eclectic yet it had an overarching sound of shared darkness. We knew right away that we had to make an album where we let ourselves indulge in all of these musical interests, and the Lost Highway soundtrack was proof that it could work.

Most musicians know that feeling of wishing you wrote a certain song. For us, it is beyond any envy of technical skill or composition, but a respect for the energy it holds. Many times we have said, “I want to write a song like blank” before starting our writing process. We want to nod towards references without being too overbearing or obvious, and that happens naturally for us when we are willing to pay attention to why we like the things we like. What we notice in a song may not be what others think to be the most apparent part — we all notice different things that drive us wild. Like most musicians that operate this way, we see this sonic curation as personal and genuine enough to educate our own sound. It’s a personal perspective on passion. Silver of the Mirror is packed full of songs that were inspired directly by other songs, or a “sound” that we feel multiple songs share.

In Lost Highway there is a scene where character, Pete Dayton, an auto mechanic, sees a beautiful blonde step out of a long, black, Mercedes-Benz 450SEL, after previously witnessing the driver, Mr. Eddy, beat and threaten a man over road rage. Mr. Eddy is a sort of mob boss/pimp type character — A man who is rich, dresses sharp, has his “men” who are there to do his dirty work and puts respect above all else. There is a sense of fear in this scene. The blonde is half Mr. Eddy’s age, and it becomes apparent that she is there with and for Mr. Eddy. When the car pulls up and stops, one of his men opens her door to help her out in a way that suggests her preciousness as an asset. She steps out in slow motion, into the LA sun. You can feel the awe Pete is in as he watches her, but when Lou Reed’s rumbling guitar and bass come in from his rendition of “This Magic Moment,” you can feel the fear that is bellowing in his stomach. Unknowingness, pensive sadness and desperation drip out of the never-ending LA sunshine and land onto the blonde’s hair. It is so illuminating and so very scary.

When we first heard the song, it was everything. How arrestingly sad and desperate that feeling was while also being alarmingly sensual. It is slow and confrontational, the guitars are dreamy, the fuzzy and rumbling bass creates a pit in your stomach and it is jarring in the sweetest way. Driving to the song felt insanely melancholic and novel; it summoned nostalgia for something that hadn’t happened yet. Nostalgia for future sorrow of mind and spirit. A weep.

“This Magic Moment” is an example of a song having a huge mood that the vocal performance plays a key part in but the lyrics not mattering as much if taken at face value. If taken literally, the lyrics are sweet and in admiration. With some nuance though, and keeping the sound of the song in mind, Reed’s version could be read from many sad perspectives. You could read the lyrics from the perspective of looking back on how sure you were of a past love after it falls apart in your hands and leaves you weak and miserable. You could look at it as Lou missing the person that he is singing about or even the great sadness that comes from a strong love that, although strong, has many flaws. A love you know can’t last. A pensive sadness over losing or the thought of possibly losing an incredibly important love.

This is what inspired our single, “Silver Behind the Mirror.” We wanted to extend that feeling to our listeners because it perfected that “movie song” idea we always looked for. It was the perfect song to drive in a car to. And it could, obviously, completely change the impact of a scene. We were so excited.

One day, Austyn was fooling around in the basement with a multi-effects pedal and let out the most haunting, reverberating guitar sound that I had ever heard, and that was it. I ran downstairs and demanded he save the setting and record whatever he just played. That was the beginning of writing “Silver Behind the Mirror.” It was that exact sound we went crazy over from Lou Reed’s “This Magic Moment.” It was that sound that we were longing for. It’s so very fulfilling when you finally find that sound yourself.

Pearly’s debut album, Silver of The Mirror, is out today on Eto Ano Recordings.

Pearly make music and videos that inhabit the same shapeless realm of dark Americana as David Lynch, while pulling from a diverse set of references to make their sound. Based in Cleveland, Ohio, the three-piece band’s sound morphs from sweet, indie rock tenderness, akin to bands like TOPS, to screeching, dance rock aggression equated with acts like Nine Inch Nails. Pearly is songwriters Austyn Benyak, Josie Yeager & drummer Dalton Edwards. 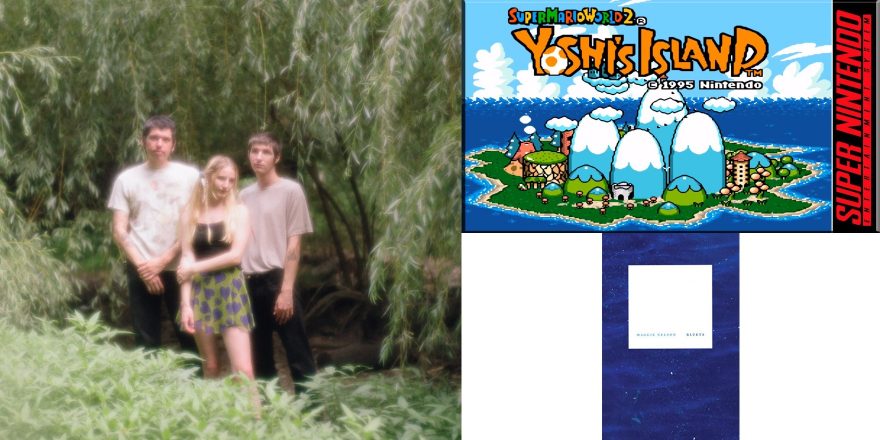