Foyer Red is a Brooklyn-based rock band. Their debut album Zigzag Wombat is out now via Terrible Records.

It was 1995. I was very young when my parents brought home a Super Nintendo gaming console, and I dove right into Super Mario World’s prequel, Yoshi’s Island. In it, Mario and Luigi are babies being delivered by a stork when a group of Koopas ambush, orchestrated by the evil Kamek. They succeed in kidnapping Luigi. Meanwhile, Mario falls from the sky onto a Yoshi, so the game centers around Yoshi and his dinosaur pals reuniting Mario with his brother Luigi. I was immediately drawn to the pastel colors, bedazzled backdrops, and hand-drawn art style akin to a children’s book colored in crayon. The time-based regenerative health system was revolutionary. I loved the whimsical gameplay that revolved around swallowing up enemies and turning them into eggs used as ammunition.

Being accustomed to the square and triangle wave synthesis sounds of its five channel predecessor, I was awestruck experiencing the jump to eight sound channels and 64kb to hold all of an SNES game’s now sample-based sound effects and music. Of course, I didn’t understand what that meant, but it opened up increased possibilities in music creation. Koji Kondo had been composing many titles for Nintendo already, and with these new innovations, came to craft one of my favorite soundtracks of all time.

My part in the Foyer Red song “Blue Pearl” was inspired by Kondo’s soundtrack to Yoshi’s Island. I’ve always come back to that soundtrack as a model of what can be dreamed up with thoughtful melodies and a distinguished sound palette (like in “The Flower Garden”). In contrast, with a rock band, your sound palette is fairly fixed — guitar, bass, drums, what have you. The rules are established, and how the band regards or disregards what is anticipated makes the experience.

Kondo’s melodies are wordy, yet concise. Often there’s short bursts of notes that vary slightly from each section, quickly establishing a memorable motif. The repetitious guitar that the vocals and clarinet whisk above strives for such thematics in “Blue Pearl.” As Marco’s drums and my guitar play in unison, we borrow from Kondo’s use of syncopations (like in “Above Ground”), where bars are stressed off of the main beat, for the bass guitar in the majority of “Blue Pearl”’s segments. I appreciated learning that Kondo would test play a game while composing the soundtrack to conceptualize how the sounds will reflect the player’s movement and the liveliness of the world that’s being interacted with. Feedback likening “Blue Pearl” to being inside a video game came as no surprise.

The cartoon marimbas, bells, wind, and percussive instruments in Yoshi’s Island sound so magical. I wanted my guitar to sound just as magical, like a dinosaur splashing step by step through pools of water on platforms suspended in the sky. In first drafts, we called the song “Blue Pedal” in reference to my pitch shifting guitar pedal used to create those peppy dinosaur trotting harmonizations. It became known as “Blue Pearl” when Marco gave Elana and I the word “knees” as a prompt for writing lyrics. “Blue Pearl” is the name of the animal hospital they took their dog Fig to for multiple grueling knee surgeries. It was rough for them, but in the end Fig recovered just fine.

A moment like that can imbue one with gratitude. It prodded me to take count of my health. I thought of the fragility of my aging body, and of the degradation of the laboring human clenching onto their national myth, guided by the belief that there is light at the end of the tunnel for those that work hard enough; all you have to do is put on a smile, build up other people’s shit, and eventually you can devote yourself to what you actually want to be doing. We live in service of the future — our success as a species is arguably owed to our ability to plan ahead and delay gratification — thus, we tend to lack sensitivity to the present moment, resplendent with nuance and labyrinthian complexity. When I remember how to slow down and do nothing, I notice the interconnectivity, and that the whole is greater than the sum of its parts. That’s made plain in Koji Kondo’s compositions, with each voice working in tandem to create expressive, unified worlds.

On the subject of lyrics, the color blue has so many identities — masculinity (bleh), sorrow, infinity, serenity, so forth. Blue is beautiful when blue is an ocean reflecting the sky. Blue is not so beautiful when it’s the uniform of authority. I’ve always loved the expansiveness of the color, and so naturally I was drawn to the 240-prose-poem-packed meditation on the color, Bluets by Maggie Nelson. With her gallivanting prose, it’s no surprise Nelson lists Virginia Woolf’s To The Lighthouse in her top 10 favorite books. Surely Bluets is highly edited, but I love the feeling that I’m looking under the hood and seeing Nelson’s stream of consciousness through all of her propositions. The book’s unconventional structure encouraged me to digress from making verses and choruses for “Blue Pearl,” rather segments: part A, part B, part C, so on, as we refer to them in our band. In general, I’d much rather call something “part A” than “verse one.” Like Nelson, we shuffled around the parts until it flowed according to our own invented logic. While Nelson grieves the loss of a lover, “the prince of blue,” and “Blue Pearl” laments late-stage capitalism, both share analogous ruminations on existential loneliness.

The book is filled with troves of gems like “loneliness is solitude with a problem,” and, “the blue of the sky depends on the darkness of empty space behind it. As one optics journalist put it, ‘the color of any planetary atmosphere viewed against the black of space and illuminated by a sunlike star will always be blue.’ In which case blue is something of an ecstatic accident produced by void and fire.” With that, I had to reference Nelson in my lyrics as homage for the inspiration I took from Bluets. I thank her and Koji Kondo for trusting their own instincts unapologetically, magnanimous in the art they have given the world.

Foyer Red is a Brooklyn-based rock band. Their debut album Zigzag Wombat is out now via Terrible Records. 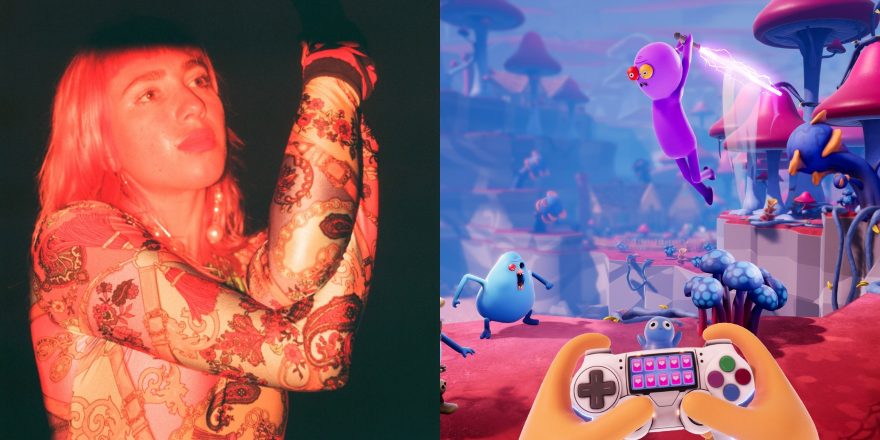 How To Score a Video Game