Scottish filmmaker Bill Forsyth was born and raised in Glasgow and made his directorial debut wit the 1979 independent comedy That Sinking Feeling (made with a budget of only £5,000), which jump-started a then-non-existent Scottish film industry. His second film, Gregory’s Girl, the hit comedy starring John Gordon Sinclair, was followed by Comfort and Joy, Local Hero (starring Burt Lancaster and Peter Riegert), and the drama Housekeeping. Forsyth would later make films starring Burt Reynolds (Breaking In) and Robin Williams (Being Human). A restoration of Gregory’s Girl is currently playing at Film Forum in New York City and the Museum of Moving Image’s “Five by Forsyth” series is ongoing through October 6.

In the late ’80s, a producer called Harry Gittes approached me through my agent about directing Breaking In. A John Sayles script that had been kicking around for a while, it was about an aging safecracker who takes on a young thief as his apprentice. I read it, liked it and then started to rework the script. I only met John Sayles once, but he seemed happy the film was being made and basically left me to my own devices. Because it had a very old-fashioned flavor to it, the biggest changes I made to the script were to bring it up to date.

Harry Gittes, who was a close friend and collaborator of Jack Nicholson’s, was a nice guy and we got on well. He was a real Hollywood character, my idea of a street-level producer hustling to make ends meet. He drove around in this rusty old Volkswagen Beetle and was always on the move. One Saturday, we hopped into Harry’s Beetle and went to hang out with Jack. It was very laidback. When we got to the house, Harry didn’t ring the doorbell, he just walked in and said, “Hi, it’s me!” We ended up watching football on the biggest TV screen I’d ever seen.

Harry didn’t have Jack in mind for the role of Ernie, the aging safecracker, but there was pressure from our producers at Norman Lear’s Act III Productions to cast him. They wanted a big name, but I had a different vision for the film. My take on it was that Ernie was a criminal who had carefully built this world of his own, a perfectly running machine through which he administered his own punishment, living a monk-like existence with a minimal social life, in a little house under the flight path. I wanted Ernie to be a mouse-like character who didn’t come out in the daylight, and I’d homed in on John Mahoney to play the role. He was my version of Ernie, a guy who lived in the shadows and almost had a waxen face because he never saw the daylight.

The more I talked to the producers about this idea, though, the more their jaws dropped, so finally we had to go looking for the big boys. Through Harry, Jack Nicholson read the script. Paul Newman did too, God bless him. They both passed. We made our way through the A-list and I got to the point where I changed my mind and said, “OK, let’s go all out. If we’re gonna have a movie star, let’s have somebody like Burt Reynolds.” And so that’s what happened. The script was sent to Burt and he was interested, so Harry and I went down to Jupiter, Florida, where Burt lived, to hang out with him.

Burt ran a dinner theater in Jupiter with some other actors, and after we left there that first time, Harry said in his droll way, “That’s one of the most complex people I’ve ever met.” Meaning, “We’ve got to handle this guy in whatever way he needs to be handled.” Burt signed on quickly, and turned out to be a very interesting guy. I hadn’t seen a lot of his work because the kind of movies he made were so different from the kind of films that I was interested in, but working with him was a real learning experience about the industry.

We ended up shooting the film in Portland, Oregon, which satisfied me because geographically it was away from the main flow of things, a backwater where shadowy characters like Ernie could hop over to nearby Canada until the heat wore off. It was a bit of a run-down, shabby place at the time, which also fitted in, and had all the locations the script called for, a bowling alley, an old funfair and a roller rink.

We had a very nice setup with the crew, and in fact quite a number of them were from Scotland. The set designer was my partner at the time, Adrienne Atkinson, and we had Mick Coulter, my Glasgow cameraman, as our cinematographer. We also crewed quite a bit out of Portland, so there was no Hollywood element to it, and it just gelled. Film crews are like circuses; as soon as you’re all there, within two or three days everyone is bonding and blending, because you share a common goal.

It was an incredibly hot summer in Portland when we shot Breaking In and Burt had this huge single-decker bus for him and the guys looking after him. It was 100 degrees, the tar was melting on the streets and this big bus was growling away in the background, because Burt kept the air conditioning on the whole time. Burt himself, though, was just an actor needing what an actor needs, which is a reason to go out there and do what he does. I probably treated Burt like any other actor in the previous films I’d done. He was very sensitive about being a star, and being an actor who had previously only really played himself. Burt wanted people he knew around the place, so a couple of actors from his dinner theater were there with him in Portland. They were his stand-ins if we were lighting a scene or doing a run-through, so Burt only needed to come out from his bus when we were actually shooting his scenes. Both of them ended up with little roles in the movie, too.

To me, Breaking In is an awkward little movie. It’s not an American film and it’s not a European film; it’s ungraspable what it is. In Hollywood, they make movies by genres – Westerns, caper movies, romances, epics and Oscar fodder – but I hadn’t grown up absorbing American cinema at all. My way of making movies is just to sit at home for six months and then think something up. A year or two later there might be a movie, or maybe not. Making Breaking In made me realize that I couldn’t speak the language of American cinema. Almost on a daily basis, I was saying to myself, “What is this that I’m doing and why am I doing it?” But we just got through the scenes in that way. I really felt like a foreigner in America at that time, trying to make a classic genre movie that any American could have made with one eye shut.

When we finished the film, we had test screenings. The numbers were awful. I felt like I should apologize to everybody. From early on, though, it was obvious that I was making a different kind of film. A couple of the production executives had come up to Portland when we were shooting in the new apartment that Mike (Casey Siemaszko) – Ernie’s apprentice – rents. We wanted it to be grubby, because this kid has absolutely nothing going for him. The two execs took me aside and said, “It’s a bit dismal…” I said, “Yeah, we’re going for that.” Another thing they objected to in the script was the length of sentence Mike gets at the end; he originally got 10 years, and they were all appalled by that and said it should be four years – which would have ruined the whole dramatic point of it. When we were filming the court scenes, I told the actor playing the judge, “I’ll just roll the camera and I want you to say every number from four to 20.” So he did that, “I sentence you to … 10 years,” and then, “I sentence you to…,” and we just covered the whole range of numbers. I ended up making it nine years, which I was quite happy with. Sometimes you win these little wars.

A few months after we finished Breaking In, we had a screening of the film in Glasgow for all the people who had worked on it, and a lot of other local film people turned up too. I had got to a stage in my career where people back home were quite happy to take knocks at me, and I remember that the film didn’t get a positive reaction.

That was the last time I watched Breaking In. I don’t really think a lot now about the films I’ve made; for me, when the movies are over, they’re over. I don’t want the world to love my films, although it’s nice if they do. I don’t ever remember having a hit, although maybe I didn’t know what a hit was. One time, I drove past the Odeon on Sauchiehall Street in Glasgow and saw people queueing up to see Gregory’s Girl – that was a bit of a thrill. But the films don’t linger a lot with me, and I think that’s OK. I wish I’d worked harder and I wish I’d worked more; I would like to have made a lot more films. I’ve probably got about 10 or 15 scripts or treatments lying around the place that never happened. Maybe one of two them will still get made, although that might be a long shot, too.

Scottish filmmaker Bill Forsyth was born and raised in Glasgow and made his directorial debut wit the 1979 independent comedy That Sinking Feeling (made with a budget of only £5,000), which jump-started a then-non-existent Scottish film industry. His second film, Gregory’s Girl, the hit comedy starring John Gordon Sinclair, was followed by Comfort and Joy, Local Hero (starring Burt Lancaster and Peter Riegert), and the drama Housekeeping. Forsyth would later make films starring Burt Reynolds (Breaking In) and Robin Williams (Being Human). A restoration of Gregory’s Girl is currently playing at Film Forum in New York City and the Museum of Moving Image’s “Five by Forsyth” series is ongoing through October 6.

“That Pisses the Fuck Off Outta Me”: Adventures with Young David Mamet 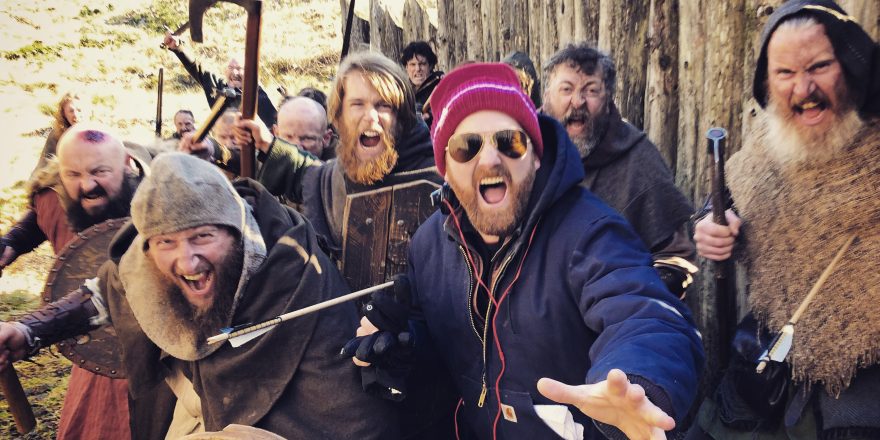 How I Came to Make a Scottish Historical Epic … in Montana