Deborah Goodwin is a writer-director-producer whose work in film and television began as a development executive for Sanford-Pillsbury Productions (Desperately Seeking Susan, River’s Edge, How to Make an American Quilt). Deborah’s Urbanworld Film Festival Best Screenplay win for her darkly provocative family drama Cherrys launched her filmmaking path. She has written for Emmy-winning and Independent Spirit Award-nominated producers, and for shows like the cult favorite horror series Tales from the Cryptkeeper. She is a Film Independent and IFP lab fellow and an ABC and NBC diversity showcase director, best known for her horror fable Vampires in Venice and her action/drama The Pastor, released by Fathom Events and AMC. Her Icelandic noir Snaeland, which she co-wrote and produced, premiered at the Vail Film Festival and screens in the Brooklyn Film Festival 2020. Deborah is a Sundance Collab advisor and screenwriting professor at Brooklyn College, and a newly minted co-creator and writer of the noir-crime-thriller series Hot Freeze, with Canadian producer Nomadic Pictures (Hell on Wheels, Van Helsing, Fargo).

Some stories sit in a drawer unfinished, some stories leap out of our minds as whole cloth and then have to be trimmed and tailored, some stories we scrape out of our innards and labor over with possessive concentration that can alienate our souls (never mind our loved ones and anyone who cares about us).

As a Black storyteller, a Black creative, the stories that met my mind and seared my soul early were not Black stories, by any means. They were inspiring classics of literature, tales of triumph over adversity, thrilling adventures and mythologies. Both my parents were writers and their love of language and ideas filled our home with literary types of every stripe and a wide collection of books. When I started to yearn to tell my own stories, I didn’t exactly know where to begin.

My mother’s relationship with her mother always fascinated me; my mother ran off and married a white man (as Grandma Mary Cherry was always quick to remind us kids) and although that led to plenty of strain on their relationship, the true fracture in their hearts and minds was due to something much deeper, more hidden, that neither would address directly. I would often press one or the other for answers about their past. “What was Mom like at my age?” Followed by the deflection, “Your mama’s always been nursing some kinda grudge, what she got against me?” Mary would huff and shrug. My mother was no better. “Your grandma knows exactly what she did,” my mother would say quietly. Years and years would go by without ever getting a clear answer to what went wrong between them. Mary and my white father actually got along just fine. She loved her grandchildren. She adored my father’s white mother across the pond (a woman who referred to a certain shade of hushpuppies she wanted to purchase me as “nigger brown”) and the two grandmas became penpals, damn the contradictions, sending each other holiday and birthday cards religiously.

It wasn’t until Grandma Mary Cherry’s health began to fail and my mother (since divorced from my father) became the primary caretaker, that I had an opportunity to sleuth into the past and to have them together under one roof to corner and question.

Out of those interrogations, a narrative began to form; it became a play and eventually, through many iterations, a screenplay. This true story I had discovered was heart-wrenching, unwieldy and untenable, but made complete sense in the way that the universe defies our logic yet demonstrates clearly the patterns of behavior into which we fall and the lies with which we cloak ourselves to keep the too-painful-truths invisible.

Cut to: me and my fledgling narrative moving to Los Angeles, where I went to work for two women producers whose films I admired and whom I secretly hoped might champion my script, now called Cherrys. And they did. The script went on to win the Grand Jury Prize for Best Screenplay at the 2002 Urbanworld Film Festival. Joie Lee, Spike Lee’s sister, was on the jury, and it felt surreal when I heard the announcement that I’d won.

Cut to: me, a Black storyteller, pitching my award-winning script to a respected production company interested in financing, based on the assembled cast at that time: Oscar winner Lou Gossett, Jr., Anna Deavere Smith, Lynn Whitfield and Eartha Kitt. The white executives, seriously and without batting a single lash, asked me straight up whether the cast “needed” to be Black …

Well, seeing as how it was based on my actual life and family …

Afterwards, my creative partners (also white) were the ones tsk-tsking over my blunt reply. Changing a story about a Black family into a story about a white family was not a deal-breaking note for them. I remember letting my head spin with this, for days. Weeks. Before recognizing that this “note” never should have been uttered in the first place. That it was racist, that it was stupid, and that it only spotlighted the glaringly uninformed nature of the potential backers we were courting.

Did they stay up for days and weeks considering their inane and insensitive remarks to me, a fledgling creator at the time, who was literally crushed by this? It wasn’t until several years later, after the financing of this project had fallen apart, that I realized, deeply and meaningfully, that I could never, ever allow myself to be diminished as a Black creator again. At the same time, the experience changed my belief in stories that entirely reflected my own Blackness. I pivoted to stories by a Black creator that were not inherently autobiographical, or that didn’t center on Black characters. So, it literally changed my creative approach and, however subtly, trained me away from Black stories.

Am I blaming a few idiots in a room who couldn’t fundamentally understand story? Nope. Years more experience as a writer and creator have given me hundreds more hair-raising stories that I file away under “humor” and sometimes even “nostalgia,” knowing that they will one day make it into a character’s mouth or be actions that elicit a response of “I know that experience” in the viewer or reader.

No, what I am saying is, this unaddressed racism is quite certainly at the root of why many authentic stories from Black creators remain untold, unseen, unheard, unfunded and unproduced. And that is a shame on our industry and our society as a whole. It underserves our humanity, which needs to feed on the rich, widespread, divergent and complex Black experiences that weave their magic throughout our national consciousness and wider civilization.

It is not an accident that Black folks are only depicted in a very, very familiar rotation to the “white gaze.” It is no accident that chauffeurs and maids, minstrels and fallen women, sharecroppers and prison inmates, ballers and rappers and abused teens still feel more cogent to the white gaze than moguls, opera singers, statesmen and stateswomen, or even abolitionists do. Black romance, intrigue, sci-fi, mumblecore, horror and ensemble comedy remain the outliers, but why? Because they make the white gaze turn with a raised eyebrow — a tacit recognition that Black people are people too.

But if we’re acknowledged as identifiably human in every way, and our stories validated in all their shades of complexity and nuance, the implied and unuttered question is, where does that leave white people and their claims to superiority? And what does it mean for the marketplace, where white stories dominate? If there’s a recognition that there is no difference between the validity, humanity and appetite for Black life of all those who consume in the entertainment marketplace, then “the rules” as designed by those serving that marketplace would be null and void and have to be entirely revised. In other words, the axis of white power, which has ground on, unfettered, unchecked, unchallenged, since the inception of what we know as “Hollywood,” needs an ass-whupping!

I grew up believing that the stories I was introduced to and loved were equally mine to enjoy, and was encouraged to see myself as the protagonist in those stories. In story, the protagonist must make a determination in order to activate their drama of human revolution (change), and I embrace that determination now more than ever. Our industry needs to not simply decide to “do better,” but to change – actively, completely, irrevocably – in the name of fairness, equity and history.

Deborah Goodwin is a writer-director-producer whose work in film and television began as a development executive for Sanford-Pillsbury Productions (Desperately Seeking Susan, River’s Edge, How to Make an American Quilt). Deborah’s Urbanworld Film Festival Best Screenplay win for her darkly provocative family drama Cherrys launched her filmmaking path. She has written for Emmy-winning and Independent Spirit Award-nominated producers, and for shows like the cult favorite horror series Tales from the Cryptkeeper. She is a Film Independent and IFP lab fellow and an ABC and NBC diversity showcase director, best known for her horror fable Vampires in Venice and her action/drama The Pastor, released by Fathom Events and AMC. Her Icelandic noir Snaeland, which she co-wrote and produced, premiered at the Vail Film Festival and screens in the Brooklyn Film Festival 2020. Deborah is a Sundance Collab advisor and screenwriting professor at Brooklyn College, and a newly minted co-creator and writer of the noir-crime-thriller series Hot Freeze, with Canadian producer Nomadic Pictures (Hell on Wheels, Van Helsing, Fargo). 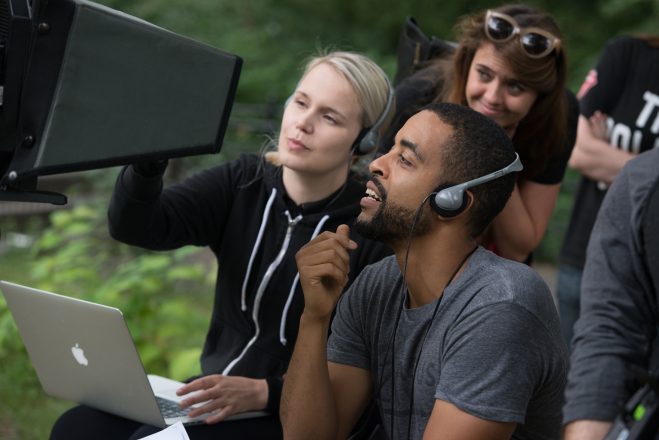 A Different Kind of Black Cinema 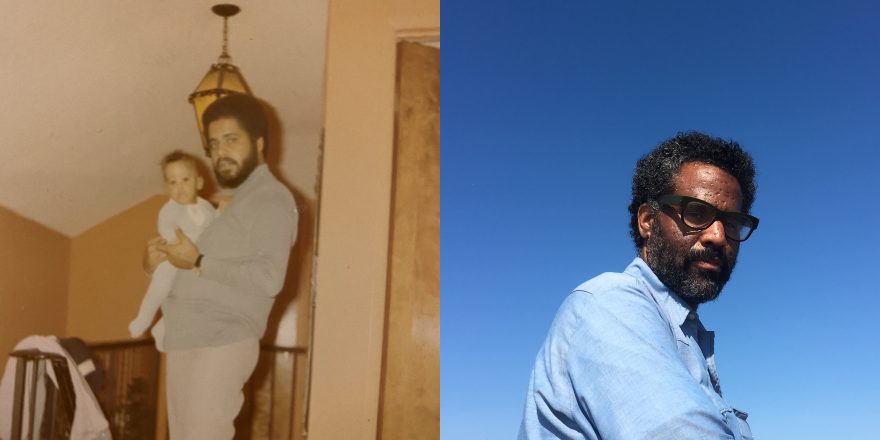 Journey Back to My Father