Born in Queens, New York, Los Angeles-based artist, writer and director Vincent Sabella is not a product of art or film school or formal training of any kind, which speaks directly to the expansive and ambitious nature of his self-learned approach as an artist and now, as a filmmaker. His paintings caught the attention of the L.A. art world after debuting his very first and wildly popular collection in 2011, Bear on A Hot Tin Roof, and over the following two years Sabella created four collections comprised of nearly 60 paintings, many of which have been on exhibit in some of Los Angeles’s most respected galleries. He made his directorial debut with the short film Note, and followed it up with two further short films, Anonymous and Imagination of Young. Sabella’s feature debut, Elizabeth Blue, about a young woman recently released from a mental hospital, who is coping with ongoing episodes of schizophrenia, is released theatrically on September 22.

“High-school dropout.” “Suicidal.” “Mentally ill.” “Schizophrenic.” “Gay.” “Cancer survivor.” “Artist.” “Filmmaker.” These are just some of the labels I have carried during my 37 years on this planet. Interestingly enough, I am all of these and I am none of these. I’m just Vincent.

I was comfortable with my sexuality even from an early age, but being an Italian kid from Queens you didn’t exactly shout it from the rooftops that you were gay. I was always sneaking out of the house after my family went to bed. I used to steal the family car when I was 14 to drive to see friends or go into the city. I had older friends that would even get me into clubs. I didn’t drink or do drugs, I just loved being out, dancing and experiencing life. I had a friend who always covered for me and I’d tell my mother I was staying at his place. The night my mother decided to call his mother, the jig was up. When I walked in the door, my entire family was waiting for me. My mother, my grandparents, even my aunt and uncle, and they were all screaming at me because they thought I was out doing drugs. Before I knew it, I started screaming, “I’m gay. I’m not on drugs, I’m just gay.” That’s when the “gay” label stuck!

I’ll admit “high-school dropout” is a self-inflicted label. I hated high school; lessons and books and tests all felt like nonsense to me. I’d skip school every chance I got and take the train into Manhattan. I loved it. It sounds cliché, but life was my school. I was smart enough to know I wasn’t book-smart and never would be. But I was street-smart. I had instincts and I went with my gut. I knew I had passions and dreams and talents and I also knew I wasn’t going to find any of it in my 11th-grade history book.

With me, the labels “suicidal,” “mentally ill” and “schizophrenic” walk hand in hand. When I was young, my mental illness went undiagnosed, as is the case with lot of kids with schizophrenia. I don’t blame anyone. It’s scary shit. What parent wants to look at their kid and admit they are hearing voices and seeing people that aren’t there? By the time I first tried to kill myself at 17, my mental health was starting to really go downhill, but it wasn’t until I was 20 that I decided I needed help and went to find it. I was then officially diagnosed (aka labeled) as “mentally ill” – and more specifically “schizophrenic” – and have been on medications ever since. I am living a better life through pharmaceuticals and they haven’t stifled my creativity, in fact they have allowed it to emerge and grow.

Many years later, after I met my future husband and moved to Los Angeles, I began to paint at his encouragement. Though I never saw myself as a professional artist, before I knew it I was having shows and getting write-ups and everyone was calling me an “artist.” Looking back, I realize that painting was just a creative outlet that would eventually pave the way for me finding my true passion: filmmaking. It was about two years into my career as an artist that I was diagnosed with stage IV blood lymphoma. After 22 days in the hospital, three spinal taps, a bone marrow test, swelling in parts of my body I didn’t know could swell, three days in ICU on dialysis and five months of outpatient chemotherapy, I remember when my amazing oncologist said, “You’re in remission.” And there it was, I had a new label I hope to have for a very long time: “cancer survivor.”

I’m not embarrassed by any of the labels which people have used to describe who I am as a person. In fact, I embrace them. Labels are a part of our culture. As a kid growing up in a working-class Italian neighborhood in Queens, where me and my two sisters were raised by my single mother and grandparents, labels were instilled into my young brain and, for good or bad, never really left me.

I recently wrote an essay in which I briefly touched on the topic of labels in Hollywood, using the example of pigeonholing brilliant filmmakers such as Kathryn Bigelow as a “female director” or Steve McQueen as a “black director,” and I realized that I was barely scratching the surface of a culture and an industry obsessed with labels. Depending on what side of the media you’re on at any given time, the label slapped across your forehead can vary. Woody Allen has been labeled “legendary,” and also an “alleged child molester.” Alfred Hitchcock was labeled the “Master of Suspense” and also a sexual predator obsessed with his leading ladies. Oliver Stone has been called “brilliant,” but was deemed an “intellectual sociopath” when JFK came out. Martin Scorsese, one of my all-time favorite directors, was beaten up and had so many negative labels applied to him for both The Wolf of Wall Street and Silence.

Regardless of what you think of the filmmakers above, for me what’s indisputable is that they are all deserving of the label “genius.” That’s because they have all created flawed, real characters that reflect the hopes, dreams, lies, fears, evils, struggles, weaknesses and strengths of the human condition while still managing to express their own points of view, views that makes you think and feel. That’s the kind of filmmaker I hope to be, one who provokes thought and dialogue. I want people talking about my movies on their drive home. I don’t care what they say, as long as they’re talking, because then I’ll know I’ve gotten it right. In an odd way, being labeled means people are talking about you, but as my career grows I also don’t want people to lose site of the person behind the label they have prescribed to me.

While trying to raise awareness about Elizabeth Blue, the team working on the film wanted to connect with various gay media news outlets to make them aware that the (straight) love story between the two main characters was inspired by my relationship with my husband and producing partner, Joseph. But there was a concern that some of these outlets might not open our pitch email if they didn’t see the word “gay” in the subject line. I found that amusing and disheartening at the same time. I say that because as a gay man I’m always hearing about the struggle for “equal rights,” so this idea that an email about my film that deals with mental illness – which affects everyone – might not be opened because it doesn’t have the word “gay” in the subject line is off-putting, to say the least. I’ve already been asked a few times why I didn’t make the two lead characters gay and my answer has been simple: “It wasn’t about that.” Mental illness (and illness in general) doesn’t care who you love, what color your skin is, who you voted for, how much money you have or what your religious beliefs are. It doesn’t discriminate. Immigrant, liberal, right-winger, snowflake, gay, Republican, Democrat – who cares? Why do we care?

As an “up-and-coming” filmmaker, I am beyond lucky to have my first feature film coming out in theaters. I have been amazed at how the film has been embraced by so many people who have seen it. I’ve been given great opportunities by the National Alliance on Mental Illness, which presented the film at their national convention in Washington, D.C., and we were just invited by the Yale School of Psychiatry to screen the film for the students and faculty. I mean, come on, really? Now that’s a label I’d like to see in a headline: “High-School Dropout Goes to Yale.” Ha!

Regardless of what happens from here, my biggest hope for this film is that it not only starts a dialogue for people struggling with mental illness, but that it helps remove the stigmas (and yes, the labels) often associated with mental illness. So I encourage everyone to go see Elizabeth Blue, because it would make this gay, mentally ill, formerly suicidal, cancer-surviving, high-school dropout filmmaker a very happy guy!

Born in Queens, New York, Los Angeles-based artist, writer and director Vincent Sabella is not a product of art or film school or formal training of any kind, which speaks directly to the expansive and ambitious nature of his self-learned approach as an artist and now, as a filmmaker. His paintings caught the attention of the L.A. art world after debuting his very first and wildly popular collection in 2011, Bear on A Hot Tin Roof, and over the following two years Sabella created four collections comprised of nearly 60 paintings, many of which have been on exhibit in some of Los Angeles’s most respected galleries. He made his directorial debut with the short film Note, and followed it up with two further short films, Anonymous and Imagination of Young. Sabella’s feature debut, Elizabeth Blue, about a young woman recently released from a mental hospital, who is coping with ongoing episodes of schizophrenia, is released theatrically on September 22.

cancer
Directing
LGBTQ
mental health
personal essay
Vincent Sabella
Helado Negro Talks with Sylvan Esso for the Talkhouse Podcast
“And Where Did the Idea for the Film Come From?” 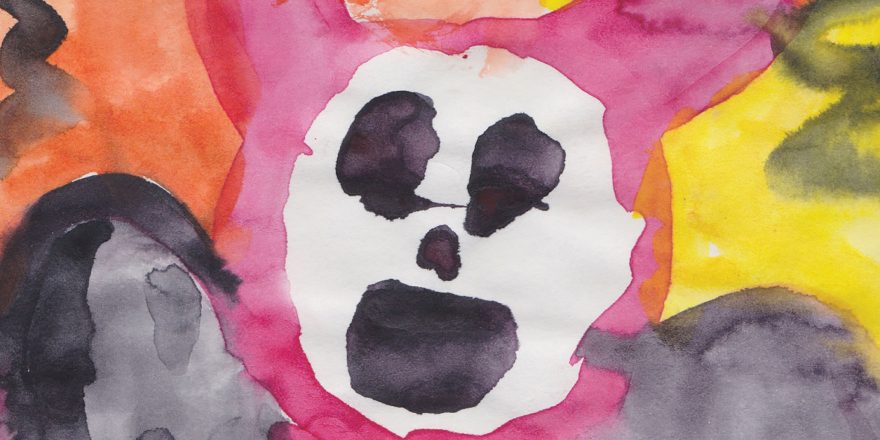 How I Stopped Worrying and Learned to Love Anxiety Medication