One of the most sought after stuntmen in Hollywood history, John Stewart became known for breaking records after falling 16 stories while on fire for the movie Cold Steel. With work on other classics like Ferris Bueller’s Day Off, Serpico, Major League II and portrayed in the 2007 feature film The Fall Guy, Stewart’s unique film career has seen him work as a stuntman, actor, producer and director, most notably with his cult classic Action U.S.A., which is available via Alamo Drafthouse from November 6 and will have a national theatrical and virtual cinema expansion from November 13.

From 10 years old on, I wanted to be a stuntman. I rode mini-bikes, did jumps, took chances and started doing crazy things. By 17, I decided I was ready for my big break. My friend owned a local movie theater where I grew up in Boston and for the theater’s grand opening, I hung upside down from the marquee, lit myself on fire and jumped through a real glass window. At that time, there was a Matt Dillon picture shooting nearby. The theater’s opening was covered by the local news and the film’s producer just so happened to be watching. The producer thought it was great stunt work and got a hold of my number through the TV station. He called me up and said, “Hey, I saw you on fire on the news today. Do you think you could come down and do something in this picture I’m doing with Matt Dillion?”

And that was the start of it.

I did a couple more films in Boston and then moved to Los Angeles. I’ve always had a thing for car stunts and high falls – one of my biggest stunts was for a movie called Cold Steel, starring Sharon Stone. At the end of the movie, I was doubling as Jonathan Banks and they lit me on fire, then threw me off a 16-story building. At the time, it was pretty much unheard of. Even now, 16 stories is nothing to sneeze at. One day, I could be on a job swimming down Class V rapids, the next day, hanging out in a pool on the set of Ferris Bueller’s Day Off. You know, pretending to drown, doubling as Cameron. 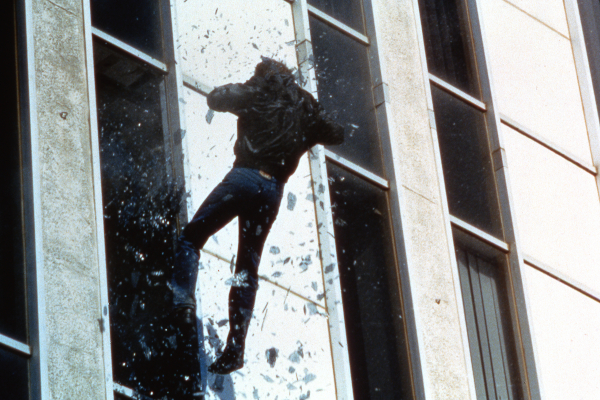 I’ll never forget how I came up with the idea for my directorial debut, Action U.S.A., an action-packed, stunt-filled thriller following two FBI agents (Gregory Scott Cummins and William Hubbard Knight) as they protect the fleeing girlfriend (Barri Murphy) of a jewel thief slain by gangsters. I had just broken my back on a film and I was recovering, basically sitting in a wheelchair in front of my house. Every afternoon, I’d sit out there for a while because I couldn’t do anything … and eventually I started writing a script. Action U.S.A. was originally called A Handful of Trouble. My next-door neighbor at the time was a guy named Wolfram Berger who owned a Porsche dealership. He’d see me and it was a “Hey, John! How ya doin? How ya healing?” type of thing.

One day, he asked me, “What are you doing?” and soon enough I’m telling him the whole story. When he asked if I was going to make it, I told him I didn’t have any financing.

“Oh, I’ll go get the money for you. You can make the movie,” he said and kinda walked away. I’m thinking to myself, “What, are you kiddin’ me?” I really didn’t know him that well. He was just a neighbor. And I’m thinking, You’re gonna give me the money to make this movie?! 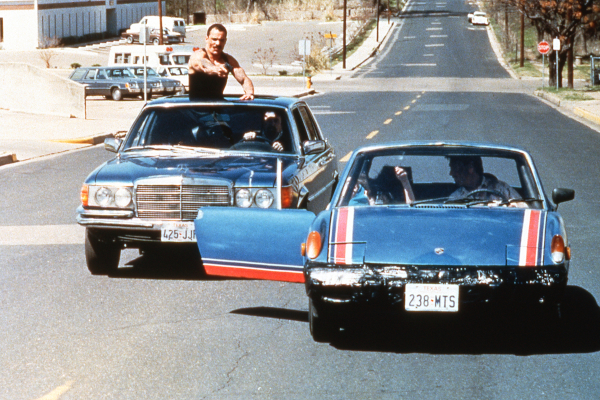 Well, a couple months later, we were in Texas, ready to shoot. Wolfram had gone and gotten the money. He mortgaged his car dealership, or something. So we loaded up the motorhome and the stunt cars, stunt gang, and explosives, and went down to Waco. Action U.S.A. wasn’t a studio picture. Wolfram wasn’t even in the movie business at the time and I don’t even know if he ever actually read the script, but he was a genius at fixing cars. When I was writing Action U.S.A., I wanted to put every kind of stunt I could think of in it. When the initial script was complete, I brought in screenwriter David Reskin to really build a screenplay from the story and, back at home, we sat in a bunch of meetings, figuring out what we were going to do. But when we got to Texas, I started rewriting the whole screenplay. There’s a bunch of stuff I added that wasn’t in the original script, because I had no idea what kind of set pieces would be possible; the helicopter scene early in Action U.S.A. – in which two gangsters dangle a jewel thief by his feet out of a chopper in an attempt to persuade him to give up the location of some stolen diamonds – has become a fan favorite and it was constructed entirely when we got to Waco. 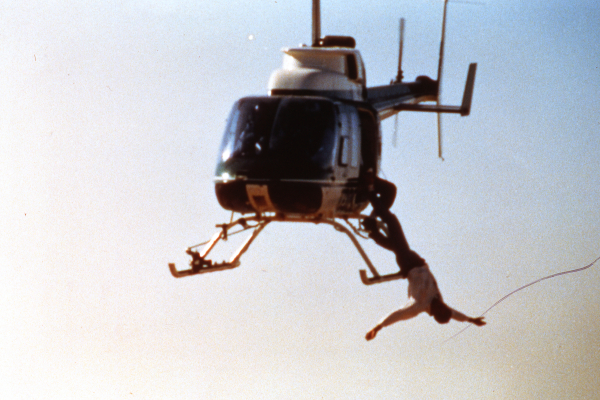 When the FAA found out what I wanted to do with a helicopter, they said we couldn’t do this scene unless we closed all of downtown Waco. Completely shut it down. Well, that wasn’t going to happen, but we had an idea. We hired the mayor of Waco and his daughter, put them in the movie and got a few favors pulled – notably shutting downtown Waco for four hours on a Sunday. All the people on the streets were our people. We placed cameras all over the place. We had about eight cameras and shot the scene a couple of times. Cameras were on the rooftops with long lenses, cameras were on the ground, two cameras on the helicopter, one camera inside looking out at the guy hanging off, and one camera mounted underneath the helicopter. Actors Gary Beal and Dave Sanders were in the helicopter. We cast stunt men as all the bad guys, so for scenes like this I could actually show their faces. We didn’t use any green-screening. Bob Brown was the guy hanging off the helicopter, and did the fall out of it. If you look closely at the mounted shot, you’ll see the cable coming out of Bob’s pants, connected to the helicopter. He wasn’t gonna fall off until he was supposed to, at the end. The only danger would be if the helicopter lost a motor and had to rotate with him hanging upside down off it … that would have been a problem, obviously. The fall was very high, too. He could have gotten hurt, but every stunt has its own specific dangers. 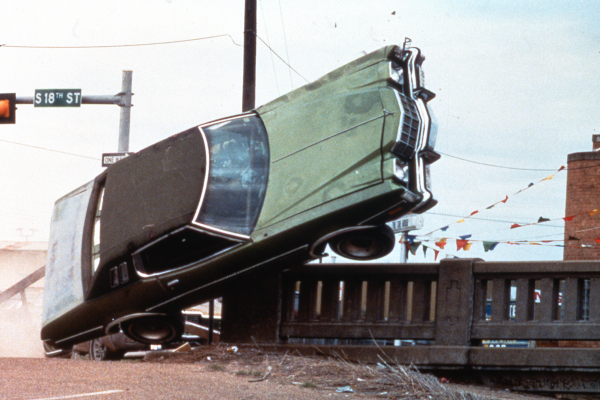 Despite being a stunt guy, I wasn’t allowed to do any stunt work on Action U.S.A. because of the film’s insurance, so I had to stay behind the camera. That said, all the times you see the camera moving in Action U.S.A., for POV shots or car chases, that was a camera mounted on a car I was driving. So technically, I was behind the camera and couldn’t get in trouble. (Unfortunately, they don’t like the director jumping off buildings!) I’d written the film as an action piece. It didn’t start with any funny one-liners in there, which were all added by actors Ross Hagen and Hoke Howell. When we’d go over the scene the night before, they would ad-lib lines and I’d say, “Hey, ya know, that works,” and I kinda let them run with it. I was really lucky to get a chance to work with such great actors … I used to watch Hoke Howell on The Andy Griffith Show when I was six years old. Ross Hagen was great and has since passed, sad to say. I used to watch William Smith when I was a kid, too; he was a heavyweight. And we had Cameron Mitchell, even though he was only there a couple days. When I shot the scene with Cameron in the jacuzzi, all those girls were from Baylor University. Even though there was no nudity, because it’s kind of a prim and proper college, I don’t think Baylor wasn’t too happy with the scene or Cameron!

We made the film for around $490,000 and shot the entire thing in 18 days, which is pretty amazing because studios will spend 18 days just on one car chase. I’d done a lot of second-unit directing before Action U.SA. and although this was the first movie I ever directed myself, I already knew I was good at directing action and moving fast. When we made the film, we set out to make a fun popcorn movie. No brainin’, no thinkin’, just sit down and watch it and have some fun and see some stunts, ya know? It’s unfortunate no one really promoted it back when it was first released, as it meant few people really saw the film. Once it came out, it just sat there. The film got me noticed as an action director and got me work, but it didn’t get the exposure it should have or that we’d hoped for. 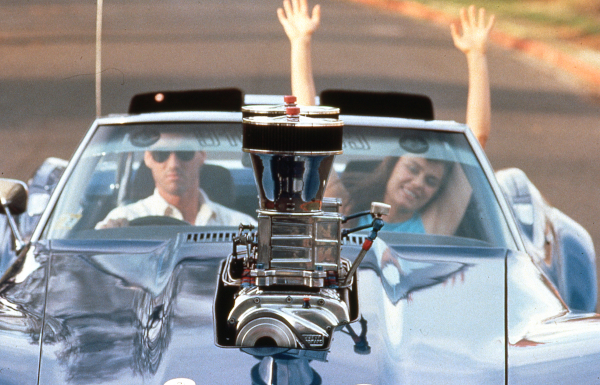 I want to thank the people of Waco, Texas, for putting up with us while we were there, because we were a gang of stunt and pyro guys with explosives who took over their city and caused a bunch of havoc. We couldn’t have done this movie anywhere else; it would not have turned out the way it is if we had shot it in L.A. I think back to the film’s bar scene: We had hundreds of extras, all of whom came out for free after I went on a radio show and said, “Anyone wanna be an extra in a bar fight? Come on down!” People donated cars so we could blow them up! That gas station you see in the film, they gave that to us so we could blow it up. The house the car drives through was given to us. As for the sleek Corvette in the opening scene, I found that when I was out scouting locations. I was getting a Slurpee in a 7-Eleven when a guy pulled up to grab a pack of cigarettes. I saw his Corvette, told him we were in town making a movie and asked if I could use the car for the title sequence, and he said, “Sure.” That’s how we made the movie.

One of the most sought after stuntmen in Hollywood history, John Stewart became known for breaking records after falling 16 stories while on fire for the movie Cold Steel. With work on other classics like Ferris Bueller’s Day Off, Serpico, Major League II and portrayed in the 2007 feature film The Fall Guy, Stewart’s unique film career has seen him work as a stuntman, actor, producer and director, most notably with his cult classic Action U.S.A., which is available via Alamo Drafthouse from November 6 and will have a national theatrical and virtual cinema expansion from November 13.

Action U.S.A
Directing
film essay
john stewart
stunt work
thriller
How Do You Cultivate Productivity and Creativity?
We’re Taking the Day Off To Vote: Here’s Why Voting Is Important, In the Words of Talkhouse Contributors 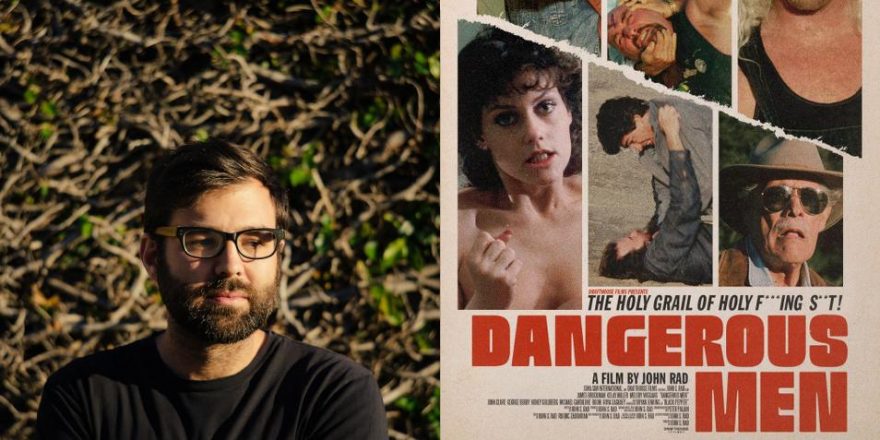