Since 1978, 773 new recordings of “Silent Night” have been brought into this world — and those are only the copyrighted versions. Every year, a new batch of musical Christmas offerings, usually pre-made in the sweltering heat of summer, is served up to unsuspecting listeners everywhere, all in the hope that a Christmas miracle somehow will occur, and the artist’s unique approach to whatever holiday chestnut they’re chewing on will seamlessly segue into the musical backdrop of the final week of November and all of December, for all eternity.

But this never-ending batch of annual reinterpretations of our shared Yuletide songbook, combined with reruns of the old, beloved and exhausted favorites that are dusted off and bled dry every year, makes for an enormous pile of Christmas music, constantly humming and buzzing, all at once, in our collective sonic background. Most of the time, you might not even notice it. You’ll never even hear most of these recordings. But they’re all playing on repeat out there — on a radio somewhere, at a mall, on a crowded bus home from work, or an abandoned landfill — and it makes for one big, snow-white noise fest that we’ve come to accept as the increasingly intense new normal this time of year.

As much as I love a lot of the same Christmas music that we all cherish, not to mention the sweet, warm feeling brought on by this most cozy of holidays, I sometimes wonder if the ever-growing cacaphony of all carols sounding at once — thousands of jingle bells jangling in conflicting tempos, to the bewildered beat of a million tired little drummer boys — might also create a sneaking fatigue, a musical numbness.

When I go to sleep in my apartment, next door to the booming traffic of the Brooklyn-Queens Expressway, it somehow feels relatively quiet to me. But it’s not. It’s just that I’ve gotten used to my surroundings. If you live in New York City, your conception of silence is somewhat different from that of someone who lives in the wilderness, away from all the man-made sound pollution that creates a very relative conception of quiet. Similarly, the fact that technology has made it possible to add Christmas music to most any experience, background, context, or room we enter has created a new normal. And it’s not normal.

We’ve gotten used to hearing music everywhere, all year — but no time more excessively than during Christmas. And due to the ever-expanding number of businesses, products and people who vie for our attention and consideration, or simply wish to provide us with the Christmas spirit — even if it’s November 10 and way premature — these poor, worn-out songs are thrown around, rerecorded, roughed up and revamped to such an extent that I gotta wonder: is there a limit to how much Christmas music we can consume, ever so passively?

And what about the songs? Most of them were written and made into classics by talented people who are no longer around to defend their work, let alone defend us from ourselves. Will this saturation of Christmas sounds and repetition of familiar songs at some point invoke nausea rather than fond nostalgia? Or are there no limits to how many tacky, theatrical versions of the already unforgiving “Little Drummer Boy” we can handle? Is there no end to the number of clumsy and quirky indie renditions of “Joy to the World” that the world can absorb before it implodes? How about the inevitable emo take on “O Holy Night”? It’s not right. Even Fleet Foxes’ morbid and beautiful evergreen “White Winter Hymnal,” the lyrics of which actually have nothing whatsoever to do with Christmas, has been coerced into the modern Yuletide repertoire by a glistening choir of a cappella vampires.

Like the well-known belief some Native Americans hold that by photographing someone you’re stealing a part of their soul, you gotta wonder if we’re sucking the life and soul out of some of these beautiful songs that are played and recorded endlessly, ad nauseam, everywhere, while our minds are elsewhere.

I certainly understand that we need music to soundtrack our seasonal celebrations, frustrations and agonies. Music helps us articulate empathy, community, appreciation and joy. But it does sometimes feel like the sheer volume of Christmas music being produced every year only adds to the claustrophobic stress that a lot of people are already overtaken with in the run-up to Christmas. There’s something manic about the way this endless stream of holiday melodies briefly flows through our lives and then completely vanishes, returning again the next year, even more desperately heartfelt and shabby chic-glossy.

Nowadays, Christmas albums by major singing stars from across the spectrum are so common that it seems more like a thing artists do just to have something to offer, in case someone comes knocking. A singer and character such Michael Bublé was, of course, put on this earth to sing carols, and it should come as no surprise that his Christmas album, simply called Christmas, will continue to do stellar business and be piped into malls all across America, every holiday season, for all time. He even reworked his version of “White Christmas” to feature Bing Crosby crooning along. No better way to eliminate the old competition than by posthumously having them join you. It’s what Bing would’ve wanted.

While most artists are happy just to take a swing at the old repertoire, some bravely attempt to make new offerings to the Christmas song cycle. One of our most popular Christmas songs, Mariah Carey’s exuberant “All I Want for Christmas Is You,” was also once brand-new. It was released on November 1, 1994, but it feels like it’s been around forever. It’s a great, spirited Christmas song, that nods elegantly to the beloved 1963 album A Christmas Gift for You from Phil Spector.

But “All I Want for Christmas Is You” is also the exception to the rule. Fewer and fewer new additions are granted room in the Christmas inn. Even fewer are invited back, let alone remembered the next year.

So it’s always adorable when artists proudly serve up their newly composed offering in the hope that it can compete with the tried-and-true classics we all already know by heart, and the joyous, unique memories already attached to them. Christmas is nostalgia, and with our constant access to the tunes of Christmas past and present, taking a shot at composing a new Christmas song seems delusional at best. In fact, how bloated must your ego be to think that you’ll compose a song so instantly memorable that it channels memories of Christmas future?

That’s what I thought to myself when, in September of this year, my friend, composer Jherek Bischoff, asked me if I’d like to try to write a Christmas song with him for a compilation Amazon was putting together. Just a couple of weeks later we were recording our new song, “Surviving Christmas,” in a studio in Brooklyn. Feeling as I do, I had been skeptical at first. But something about this impossible challenge drew me in. In the end, the song felt true and inspired, although I realized quickly that the market for a wholesome, earnest family sing-along Yuletide-song about the refugee crisis in Syria sadly is more narrow than ever.

The great motivation behind most modern-day Christmas songs (and your old favorites) is, of course, the minuscule chance that, were you so blessed as to write the new “All I Want for Christmas Is You” and be ordained into the Christmas menagerie, it would be the Christmas gift that kept on giving, year after year. A Christmas hit is a money machine — for instance, it’s the sole source of income for the rich, Scrooge-esque bachelor played by Hugh Grant in the film About a Boy. Just to make him even less likable, his character didn’t even write the damn song he’s living off of — his late father did. It’s the ultimate quick and easy-to-resent, absurd wealth. Eventually, though, he learns an important lesson. But the checks will forever keep coming. Just like Christmas. 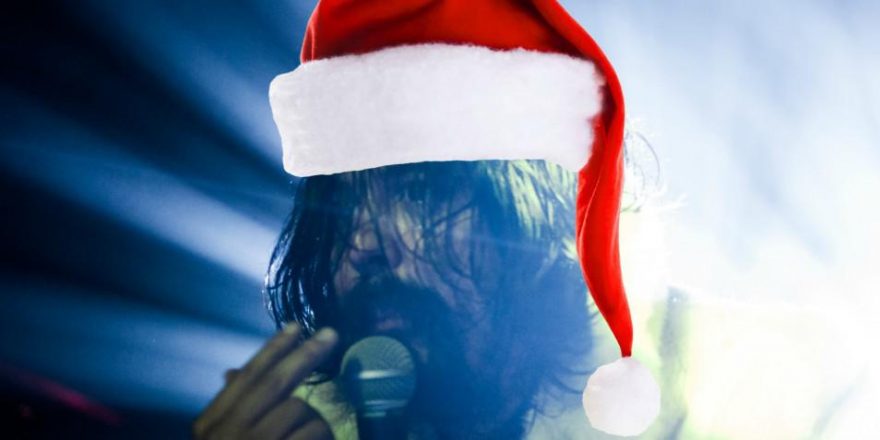