Writer-director Sara Seligman’s debut feature, Coyote Lake, starring Adriana Barraza and Camila Mendes, opens in select theaters through Cranked Up from August 2. Born and raised in Mexico, Seligman moved to New York City in 2005 to pursue her dream of becoming a filmmaker. After graduating the New York Film Academy, Sara worked in production, development and post-production in film, television and advertisement. During this career path, Sara worked under the wing of Jennifer Todd (for the feature film “Live By Night” and the 2017 and 2018 Academy Awards,) and as a commercial producer for ad agencies. Sara sold her first screenplay, Plan V, to No Dancing Today, in 2015; the movie had its theatrical release in Mexico summer 2018. Sara wrote, directed and produced her short film, Diego, which was screened at film festivals around the world (including the Palm Springs International Film Festival), and received several awards, including the Gold Lion at the Barcelona Film Festival.

My new film Coyote Lake has been part of my life for more than a decade. The inspiration came from two unrelated newspaper articles. The first told the story of a mother-daughter duo who killed soldiers during World War I in order to steal their money. The other article was about an American couple who went fishing in Falcon Lake, a border lake separating Texas from Mexico. The wife claimed she and her husband were attacked by cartel members, who killed her husband, but she was able to escape.

I wanted to tell the mother-daughter story from the first article, mainly because I’m fascinated by complex relationships, strong female characters and crime stories. The vigilante aspect was an extra element that drew me to the first tale. An intricate mother-daughter relationship is something I can connect with on a deep level; however, I knew that for my first feature, I wouldn’t have a budget that would allow me to do a period piece properly. This reality, and my desire to focus on stories that concerned my homeland of Mexico, brought the second article into play.

By combining these two narratives, Falcon Lake became the perfect backdrop for a mother and daughter to literally get away with murder in a distorted attempt at bettering their own lives. This decision allowed me to both write a budget-friendly first feature, and to play with elements that I felt close to culturally, placing the thriller in a world I’m connected to on many levels.

During the entire writing process, my co-writer Tom Bond and I made sure we created three-dimensional characters. Nobody in the movie is simply good, just like nobody is pure evil. As a viewer, I find flawed leads and likable villains the most compelling mixture. And as a director, nothing is more satisfying than to delve into deeply conflicted and complex characters with my actors.

When we started pitching the movie in 2013, a lot of companies passed on it, many because they didn’t want to make or get involved with another “border, cartel or drug dealer movie.” But the movie is not about the border, the cartels or drugs. Those are just elements of the backdrop, a confluence of circumstances pushing our characters to the extreme.

The movie is actually about the coming-of-age of the daughter, Ester, and the inevitable necessity of cutting the proverbial umbilical cord from one’s parent. In Coyote Lake, we watch an overbearing mother who wants to protect her child in her own way, but ends up hindering her growth and maturity. I also wanted to explore the endlessly fascinating debate of nature vs. nurture, the violence that can exist in love, and the danger of one person being judge, jury and executioner.

However everything changed in 2015, when Donald Trump announced he was running for president. His words often demonized minorities, including one infamous moment when he referred to Mexicans as “rapists, drug dealers and criminals.” Obviously, I was infuriated by his words, the harm he was causing and the negative stereotypes he was perpetuating. I honestly began to question if I should still try to get this movie made.

Even early on in the process, there were already many amazing people involved, people who believed in the script we were making. But as a Mexican, wouldn’t it be a betrayal to make a movie that portrays Latinx people as Trump described them? Killers, criminals, drug dealers? Wouldn’t I just be feeding into the misconception?

I’m very aware of my privilege. I’m a cisgender, able-bodied, white-passing Latina, with a supportive family. I had the opportunity to come to the U.S. legally and, after 13 years, become a U.S. citizen. I want to make it clear that, while becoming a U.S. citizen was a long and expensive process, it was also one where my privileges enabled me every step of the way. I have been asked on numerous occasions if I find it unfair that, while I went through the extensive process of immigrating legally, others just “sneak into the country.” My answer to this is always “no.” What’s unfair is that other humans have to come here illegally because their circumstances are horribly dire, because they don’t have access to safe living conditions and the rest of the world consistently turns their back on them. What’s not fair is that the current government makes people believe all immigrants are detained for coming to the U.S. illegally, while in reality, it’s actually the U.S. government breaking U.S. and international laws by detaining even the people who are legally presenting themselves at the border for asylum, without due process. That, amongst so many other things, is what’s not fair. My ability to immigrate here legally has nothing to do with fairness.

So, there I was, in all my privilege, trying to make a movie that depicts members of the Latinx community as murderers and drug dealers. The guilt was killing me. I was going back and forth trying to decide if I should abandon this project after nine years, or if I should keep going. I truly believed that this movie was not about drug dealers and killers, but people in extreme circumstances – and that hadn’t changed. What seemed to have changed was the sociopolitical climate.

I felt disgusted by my indecision. As an outsider, making the right choice can seem so obvious and easy. But now, it was murky and I couldn’t figure out a clear path forward. As a storyteller, I’m drawn to stories with morally dubious protagonists, to tales of murder and crime. But was I being selfish by making Coyote Lake?

While I was going back and forth about what to do with the project, other pieces started falling into place: talented actors were attached to the project. First came the amazing Adriana Barraza, followed by the rest of the wonderful cast – Andrés Vélez, Manny Pérez, Camila Mendes, Neil Sandilands and Charlie Weber. And Good Deed Entertainment was ready to greenlight the film. I never truly thought this moment would come for me, especially with so many talented actors, producers and crew members attached. Having Adriana as one our leads was truly incredible, as we’d written the role especially for her, all those years ago. So here it was, my wildest dream come true, and right next to it, a mountain of guilt.

As I stewed in my guilt and wondered if Coyote Lake would further the false narrative Trump was perpetuating, I realized something: the thing that had really changed in the current climate was this: people felt more empowered to be open about their prejudices. The racism and contempt toward immigrants has always been there. Trump’s rhetoric was just exacerbating those feelings. His rhetoric made it acceptable for people to be vocal about their racism. Yes, he was spreading misinformation and further demonizing Mexicans and the entire Latinx community. What he was not doing was suddenly making people racist. That was already there; it had always been there. The injustices against immigrants, asylum seekers and, in general, the idea of preying upon “weaker” countries existed long before Trump. Just like the people who opposed Trump didn’t leave the country when he won, and just like we are not going to “go back where we came from,” I was not going to go back on my initial feelings of what my movie was actually about.

The fact that so many talented people were willing to be part of Coyote Lake, especially such a strong Latinx cast, was reassuring and helped me maintain the belief that Tom and I had succeeded in creating real, complex characters. The script demonstrates that anyone can end up in an inescapable situation which can lead them to do terrible things.

I hope the audiences who go see Coyote Lake root for Ester – for her chance and right to make a better life for herself, regardless of her past. And in the real world, I hope people do the same – root for fellow humans, including immigrants and asylum seekers, to have that chance as well. A chance for a life of real choices, not a life as a victim of circumstance. We are all human. We are all complex. We all deserve to be heard. We all deserve due process and we all deserve a chance.

I’m still not certain what my responsibilities are as a filmmaker, mainly because I’m still figuring this whole thing out. All I know is that I love telling stories and as long as I have that opportunity, I will continue to tell them the best way I can. As a human, as an immigrant, I know that no one person is more valuable than another, no matter where they happen to come from. We don’t choose where we are born. It’s a matter of luck. Let’s never forget that.

Writer-director Sara Seligman’s debut feature, Coyote Lake, starring Adriana Barraza and Camila Mendes, opens in select theaters through Cranked Up from August 2. Born and raised in Mexico, Seligman moved to New York City in 2005 to pursue her dream of becoming a filmmaker. After graduating the New York Film Academy, Sara worked in production, development and post-production in film, television and advertisement. During this career path, Sara worked under the wing of Jennifer Todd (for the feature film “Live By Night” and the 2017 and 2018 Academy Awards,) and as a commercial producer for ad agencies. Sara sold her first screenplay, Plan V, to No Dancing Today, in 2015; the movie had its theatrical release in Mexico summer 2018. Sara wrote, directed and produced her short film, Diego, which was screened at film festivals around the world (including the Palm Springs International Film Festival), and received several awards, including the Gold Lion at the Barcelona Film Festival. 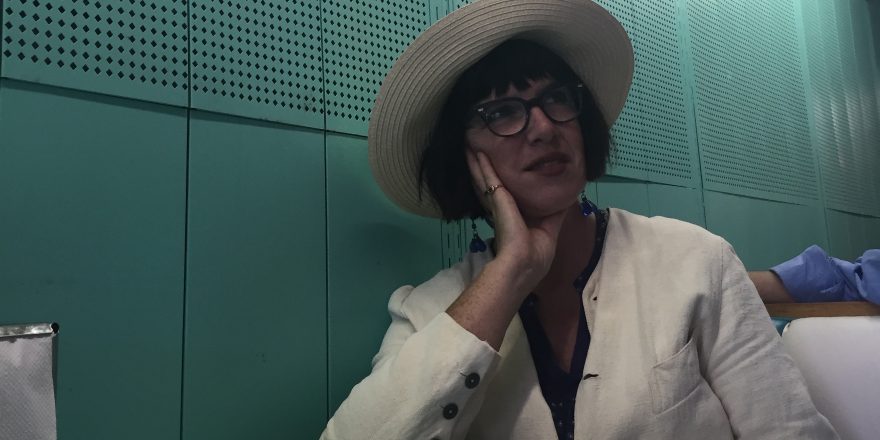