Known for his hands-on directing approach and undeniable eye for talent, British-Zimbabwean filmmaker and writer Mark Tonderai has become one of the most in-demand directors in the entertainment industry today. Tonderai’s new thriller-horror for Paramount Pictures, Spell, is out now on PVOD. The film stars Omari Hardwick (Power) as a man who crashes his plane while en route to rural Appalachia with his family and awakens to find himself completely alone and in the care of a seemingly kind elderly woman (Loretta Devine), who begins to pull him deeper and deeper into a sinister world. Tonderai is best known for directing Jennifer Lawrence in the 2012 horror-mystery House at the End of the Street and for writing and directing the 2008 thriller Hush. Other directorial credits include BBC’s Doctor Who, Netflix’s Locke & Key, and Hulu’s Castle Rock. (Picture by Amanda Matlovich.)

Along with William Gay’s Twilight, James Joyce’s The Dubliners and Christopher Marlowe’s Dr. Faustus, one of the most influential books I’ve ever read is Alan Moore and Dave Gibbons’ Watchmen.

There’s a section that shifts to prose and to an excerpt from Under the Hood, the autobiography of Hollis Mason (aka Nite-Owl I). Hollis talks about Denise, the woman who works in the local grocery store who is one of America’s great unpublished novelists. Hollis is about to start his book and Denise gives him some advice:

“Without looking up from the boxes of detergent to which she was fixing price tags, Denise graciously delivered up a pearl of her accumulated wisdom in a voice of bored but benign condescension.

Start off with the saddest thing you can think of …”

But really, to me, this means if you’re gonna write something and if you want people to read it, then you must talk from the heart. You’re taking their time, so make it worthwhile. It’s a belief I apply to everything I offer to an audience. Cook it with love. Serve it hot. Make sure it’s unique, be honest and never doubt their intelligence. It’s the least people deserve.

So, I have to really thank my parents, who started all of this. 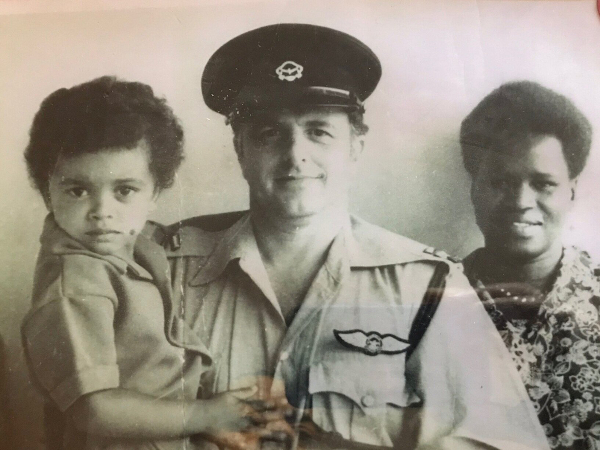 I think about my mum a lot. When mums die, you lose that one person in the world who, no matter what, will always give you unconditional hugs. Mums are special. A mother’s love is priceless. So, with my new movie now out in the world, my mum won’t be here to stand beside any of the billboards on Melrose and take photographs. 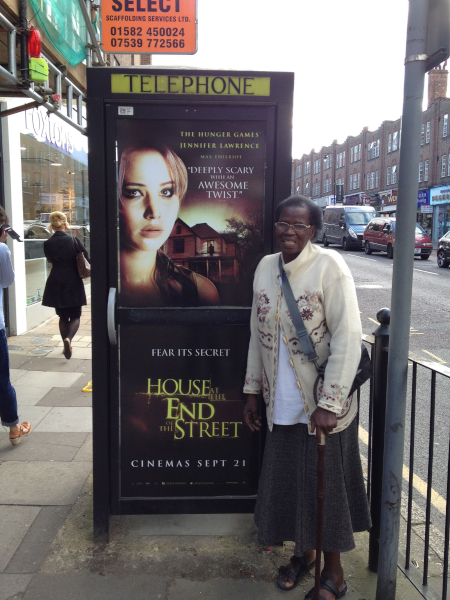 My parents gave me, in their own way, the two things that fuel me as filmmaker. A well of pain to draw from – which I think all storytellers need – and a love of film.

I’m gonna talk about my dad first. He was a white man who moved to Rhodesia (now Zimbabwe) in the early 1950s. About a decade later, Rhodesia became embroiled in the Second Chimurenga, a brutal civil war between the forces of nationalist guerrilla leader Robert Mugabe and those of Ian Smith, the country’s white colonialist prime minister.

Rhodesia practiced a system of apartheid not dissimilar to the one in South Africa, where the society was divided into whites, blacks and colored people (mixed race or Indian). When my father went out to Africa, he was married to a white woman, but then he met my mum and, well, things got … complicated.

Then they had kids, and suddenly it got dangerous.

The war was raging and, as my mum told me, “The whites didn’t trust your father and the blacks didn’t trust me.” As a kid, I hated being mixed race in a country like Rhodesia. I always wanted to be one thing or the other, but being in between … God, why me? I now, of course, realize that the between-the-cracks-life I was brought up in is my strength. My culture is equally as Zimbabwean as it is English.

I once asked my mum why she had colored children in a place like Zimbabwe. She smiled in that benign yet judgmental way of hers and answered simply, “Because I loved your father.”

When I was four, our village in Mrewa was attacked, and my mother’s brother Andrew was badly injured and then the government got involved and my father was told to leave. We ended up in Zambia, which had got its independence in 1961 and was being run by Kenneth Kaunda. We lived on a farm, Airport View, outside the capital city of Lusaka. By this stage, my parents had five children. Me and my four brothers.

Our days consisted of chasing lizards, hanging out with our Ridgebacks, Sandy, Paddy and Wonder, and eating mulberries from the mulberry bushes we had. We had mangos too, but the boomslangs (a vicious snake) lived in those trees, so we kinda avoided them. Apart from the puff adder, snakes weren’t really our nemeses, it was baboons and rats, because they were both so big and brazen.

When I was seven, I looked up to my father as my hero. I used to love driving to work with him in his Ford Zephyr, the eight-track playing songs like Charlie Rich’s “The Most Beautiful Girl” or Roger Whittaker’s “Durham Town.” He’d let me sit on his lap as he drove, and I’d steer. I’d also sit on his lap while he read the paper, trying to match my breathing to his, and when he went to work, I’d go with him.

In Lusaka, there was a book and stationary shop called Kingstons. At the bottom of one of the book racks was a whole load of books on Greek mythology, so I’d go into Kingston’s and I’d sit on the floor, and I’d read and read. My father didn’t like to disturb me, so he’d give some money to the shop assistants for food and leave me there while I read.

Everything I know about writing, I learned from those myths. Everything.

When I sat there and read, the world stopped existing. I was in the book. It was like I had been transported into a new universe. I still love to read. Prose is like fuel for a screenwriter. Scripts are written in the present tense and relayed in action and dialogue; prose provides tools like breaking the fourth wall and invoking smell and taste.

My father used to belong to the Lusaka Flying Club. It was a club for expats who liked to drink Castle Lager and fly planes. Sometimes in that order, too. After work he’d go there and get drunk with his mates. When the kitchen would close, my dad would go in there and make me ketchup sandwiches. I loved them.

Then, while he got hammered, he’d get the club projector and turn it on. He’d plonk me down in front of it and I’d watch film after film. Herbie. The Magnificent Men in their Flying Machines. Death Wish. I saw them all. Between Kingston’s and the Lusaka Flying Club, I had my storytelling education.

Now to bring the pain.

I really believe that great storytellers have something broken in them. By an event that’s forever traumatized them spiritually or an event that’s changed them. I think part of Spielberg’s genius is because the echoes of his parent’s divorce really fractured him. Most of his films relate to fathers and sons and family. I love the work of James Gunn, who I know is an addict in recovery. Is it any wonder his films are so full of life?

As filmmaker, you draw on emotion usually gleamed from the past and it expresses itself in your work. When my parents started fighting, it was not arguments but ultra-violent physical confrontations with stabbing and punching. My mother had a terrible temper and she would go at my father with a kitchen knife. Every night, the five of us lay in bed, terrified they would start fighting; whenever they did, my older brothers Mike and Tony would whisk us out of the house and hide us in the compound where our workers lived until it subsided.

I wrote a film about that time in my life called Once Upon a Time in Zimbabwe. It was the first script I sold, but of course no one wanted to hear story about a family in Southern Africa, so I never got the money. Here’s an excerpt from it: 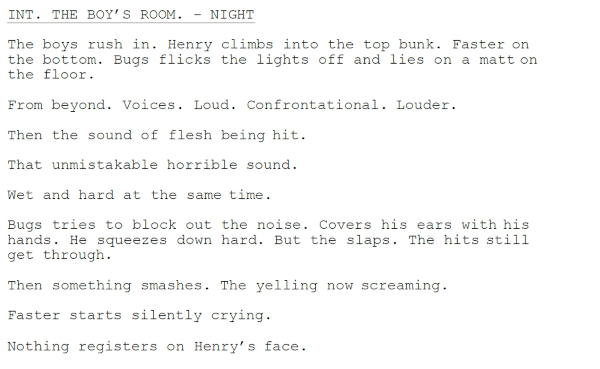 The sound of flesh being hit. Wet and hard at the same time.

I can still hear that sound.

I think their fighting broke us. All of us in different ways. One of my brothers started sleepwalking, another always wet the bed. And to this day, we are all prone to violent outbursts.

To this day, I so hate losing my temper because I lose myself.

I don’t blame my parents. What happened, happened. My father never ever missed any of my rugby matches. And my mum, even though she’d wallop us with the belt or the sadza stick, really had our backs. I used to love Skippy the Bush Kangaroo, an Australian TV show about a kangaroo who used to help rescue people. I was so upset when the last episode aired, my mum went down to ZBC (Zambian Broadcasting Corporation) and bribed someone to show it the next day.

And my parents tried.

When I look at the world now and all the hate in it, all the anger and fear, I wish so much we could all remember that we live dependent on each other, not independent, that we could try to get along.

My life, and who I am as a storyteller, isn’t just about my mum and dad, it’s about so many people who have helped me. I am indebted to them all. I am so lucky to be doing what I do. It’s a privilege, and I really hope you enjoy Spell. Trust me, it’s been made with love.

But now when I straddle up and put that camera on my shoulder, I always say “I love you” to Mum and Dad. 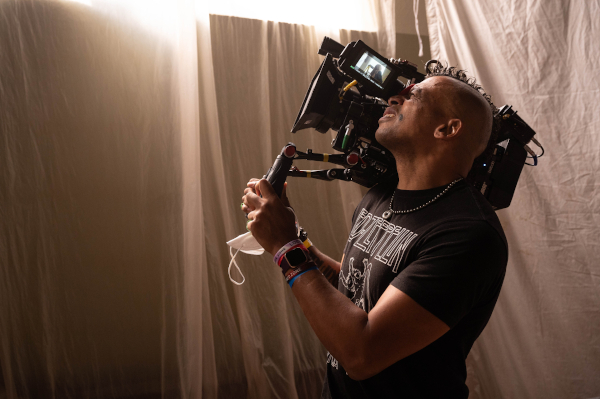 Known for his hands-on directing approach and undeniable eye for talent, British-Zimbabwean filmmaker and writer Mark Tonderai has become one of the most in-demand directors in the entertainment industry today. Tonderai’s new thriller-horror for Paramount Pictures, Spell, is out now on PVOD. The film stars Omari Hardwick (Power) as a man who crashes his plane while en route to rural Appalachia with his family and awakens to find himself completely alone and in the care of a seemingly kind elderly woman (Loretta Devine), who begins to pull him deeper and deeper into a sinister world. Tonderai is best known for directing Jennifer Lawrence in the 2012 horror-mystery House at the End of the Street and for writing and directing the 2008 thriller Hush. Other directorial credits include BBC’s Doctor Who, Netflix’s Locke & Key, and Hulu’s Castle Rock. (Picture by Amanda Matlovich.) 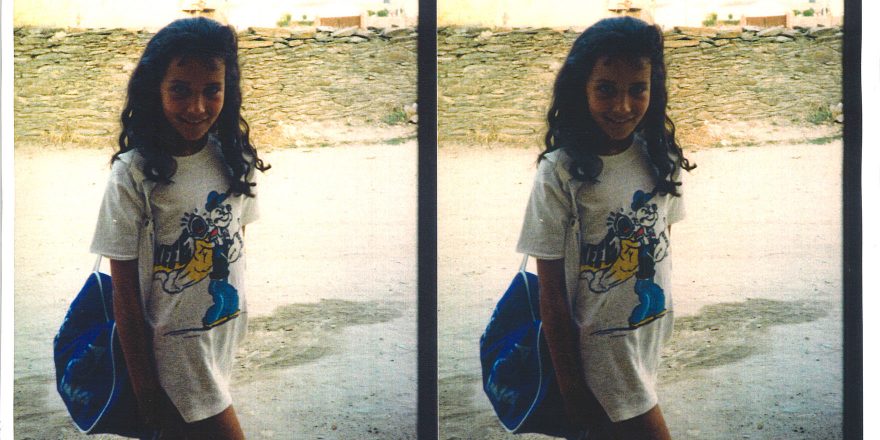