Kiran Gandhi is a music industry thinker and artist. She served as Interscope Records’ first-ever digital analyst 2011-2013. She has toured internationally, drumming for artist M.I.A in 2013 and DJ duo Thievery Corporation in 2010, and now produces music under her own project Madame Gandhi. You can follow her on Twitter here, Instagram here and Facebook here, and hear music on her Soundcloud page.

An Ellie Goulding album never disappoints. Dance anthems, ethereal sounds, stories about love and Ellie’s unique voice pulse through each record in her discography. But Delirium, the singer’s third studio album, marks a milestone of artistic growth. Each song connects to the next and builds on the former, and Goulding plays down experimental EDM sounds in favor of uplifting pop anthems that feel fuller. Relationships and love form the theme of most songs, her lyrics expressing sentiments that we can all relate to — and the melodies provide soulful undertones that make you want to dance.

This is a dance-pop album, to be sure — most songs are radio-ready — but Ellie fans shouldn’t worry as she does maintain her unique personality and style on each track. My favorite part of any Ellie song is her vocal range – and the howls that she goes for — and her vocal shapes are present and showcased well on each song.

There isn’t a moment to catch your breath on the album; this seems to be the artist’s intention — this record is about claiming her space on the top of the pop charts, and keeping the fan dancing from start to finish. The incredibly well-produced album opener “Aftertaste” lends itself well to live performance. The drum solo (at the 2:45 mark) feels exciting and epic, and will do well in any context where the listener wants his or her own victory soundtrack!

“Something in the Way You Move” is a nod to Goulding’s earlier EDM work — her voices travels in and out of her classic Ellie falsetto, and the effects on the vocals feel uplifting and radiant. The song also follows a classic EDM pattern of builds and drops to maintain excitement throughout the pop tune.

My favorite song on the album is probably “On My Mind.” It has an edginess to it that I haven’t heard before in Ellie’s music, yet the attitude behind it still feels authentically her. The lyrics are rhythmic and fall over the beat like drums, and the melody is undeniably catchy. She is also singing about something we can all relate to: when we are thinking about someone when we know that we shouldn’t be.

“Around U” feels a little too much like a Taylor Swift song — maybe the songwriters accidentally mailed the concept to the wrong pop singer? This is the only song on the album on which I felt that Ellie fully departed from her distinct, effervescent EDM vibe in order to pursue something more formulaically pop.

The lyrics on “Codes” are awesome: “Stop talking in codes/Let me know what’s up/Can’t do it no more!” I hope this song makes it to the charts, because each of us — men and women alike — can relate to this sentiment. The builds in this song are powerfully produced, drawing the listener into the track immediately. You’ll want to dance, sing, scream, move and shout the anthem at the top of your lungs to your lover!

“Holding on for Life” has a bit of a gospel-blues energy to it, with the fast claps and large choral voices. It showcases Ellie’s vocal style the best — all of her highs and lows — and the warmth of her voice stands out. I love the piano that plays joyfully underneath it all, although this song would do very well a cappella. It is well written and does not need as much production and as many effects as it currently features. I can envision many musicians covering this song in a stripped-down setting.

The opening effects on “Don’t Panic” sound the most like modern electronic music: beautiful, delicate, manipulated sounds. I wish there had been more of this on the record, keeping Ellie in a more experimental place for longer, but I suppose that this is, as I said, a pop album, so it has to sound consistent.

My prediction is that, beside summer single “Love Me Like You Do,” “We Can’t Move to This” will be the most remixed song off the album. It is a classic Ibiza dance song — very summery and celebratory, despite the tragedy in the lyrics — and the pitch-shifting effects on her voice are super relevant to how many artists are experimenting with vocals today. The irony of it all is that you absolutely can move to this song, despite the negative title.

“I Do What I Love,” on the deluxe edition, surprises you with a Missy Elliot-like, amazing weirdness as the song opens: it is serpentine, Caribbean. Ellie does not give an eff: “I can’t ask for your permission/I can’t wait for it/Because I was born free/I ain’t takin’ shit/I do what I love and I love what I do!” It is Ellie’s liberated, boss madame gift to her female fans: a tribal and rhythmic anthem about self-empowerment that encourages us all to do what we love and love what we do!

Despite creating a heavily produced, traditional pop record, Ellie Goulding manages to achieve emotional complexity with each track on Delirium — and it’s a win. She takes us through her pains and joys, and lets us heal through her undeniably exciting music.

Kiran Gandhi is a music industry thinker and artist. She served as Interscope Records’ first-ever digital analyst 2011-2013. She has toured internationally, drumming for artist M.I.A in 2013 and DJ duo Thievery Corporation in 2010, and now produces music under her own project Madame Gandhi. You can follow her on Twitter here, Instagram here and Facebook here, and hear music on her Soundcloud page. 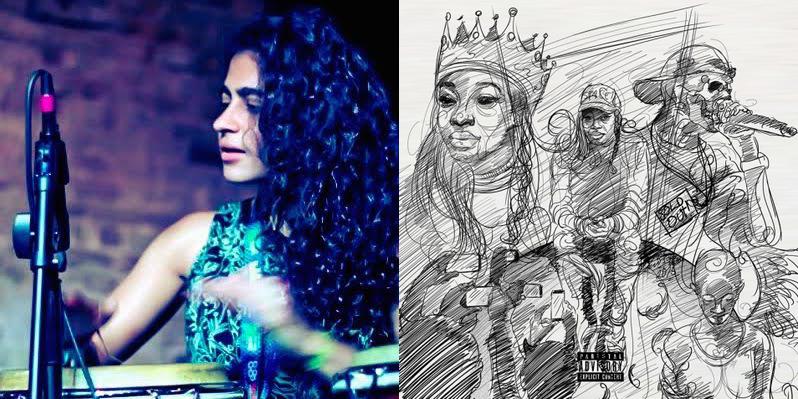