Communipaw is a psychedelic folk-rock band that spends its time between Brooklyn, NY and Oakland, CA. In February 2019, they released an EP entitled Power Plant that affirms their enduring interest in mysticism, memory, and Sierra Nevada Pale Ale. The band features Brian Bond on vocals and guitar, Keith Carne on drums, Justin ‘Bestamo’ Gaynor on guitar and pedal steel, and a rotating crew of collaborators on everything else.

An uncommonly lithe and springy chihuahua named Ladybug goes tearing ass around a windy beach, her paws flicking across the tops and troughs of little sand swells, her ruddy pelt dyed gold by the afternoon sun. She’s reached the end of an odyssey that began in a kick drum and ran through dark city streets and a nighttime fairground, into the back of a candle-lit car, and has led finally here, to what might be the Long Island of Weekend at Bernies, or, more likely, the beaches of Santa Clara, fictional home to the middle school comic shop owners and hair-metal vampires of Lost Boys.

Ladybug’s peregrination, shot in squared-off aspect ratio with a dingy 16-millimeter texture, feels imported from the Reagan years, when picaresque pet movies were used to demonstrate the importance of virtue in a world that offered no handouts but would reliably reward grit and self-reliance. And yet the soundtrack, Communipaw’s new single “Power Plant,” describes a more confused morality, where it’s “hard enough just to practice basic forgiveness,” and singer Brian Bond admits, “upstream in a rowboat, no, there’s not much I can give her.”

I was on tour in Germany with Brian and drummer Keith Carne when they received this video’s initial edit from director Alex Markman, who used his own dog, car, camera, and candle in the filming. Keith and Brian gave it an instant thumbs-up, only questioning the inclusion at the beginning of the video of several brief shots of the band (an uncertainty that faded). I was impressed, too, and when, some time later, Keith asked me to write something to accompany the premiere, I knew my chance had come. I had been dying to talk to Ladybug about the video, and agreed to the assignment on the condition that such a conversation be arranged. Ladybug proved to be as thoughtful and incisive as you could hope a dog to be, and we spoke on the phone for the better part of two hours. I’ve edited the transcript for length.

Chris Cain: Ladybug, hi! Hello! Wow. I’ve been looking forward to this. So many questions! Where should I start? I guess first of all — am I nuts, or are you pretty fast for a chihuahua?

Chris: I hope you didn’t take that the wrong way. What I mean is just, wow, you’re an incredibly fast dog — a really good girl! Alex must be proud of you.

Chris: Actually, I know he is. He told me you were a princess during filming — great at taking direction, just a total muffin. Dogs have a reputation for being difficult to work with on set. Any idea why that is?

Chris: The scene in the car. You seem completely at ease. Is that acting or are you a good little traveler off-camera, too?

Chris: I imagine it’s strange to perform in a “movement” video without being able to hear the music. Was Alex piping in the song, or were you just acting to a “mood”?

Chris: Sounds like you’re having some dinner over there. It’s been a real pleasure speaking with you, Ladybug. Can I just say, this is one of my favorite videos I’ve seen in a long time. It’s kinetic, nostalgic, so moody and vibey… Sorry, I’m rambling and it sounds like you’re scratching at the door to be let out. Well, shoot, thank you for taking so much time with me. Hope to see you in another music video soon — or maybe a TV show or movie!

Ladybug is a performer with miles of promise who turned in one of this year’s great canine performances. The same can be said of Communipaw, except “human.”

You can catch Communipaw live on May 19 at Union Pool in Brooklyn, NY at 4 PM

Communipaw is a psychedelic folk-rock band that spends its time between Brooklyn, NY and Oakland, CA. In February 2019, they released an EP entitled Power Plant that affirms their enduring interest in mysticism, memory, and Sierra Nevada Pale Ale. The band features Brian Bond on vocals and guitar, Keith Carne on drums, Justin ‘Bestamo’ Gaynor on guitar and pedal steel, and a rotating crew of collaborators on everything else.

Chris Cain
Communipaw
dogs
introducing
Keith Carne
Power Plant
video premiere
We Are Scientists
Sketch in Time
Matt Braunger Loves Game Of Thrones, But Not As Much As You Do: Episode 4 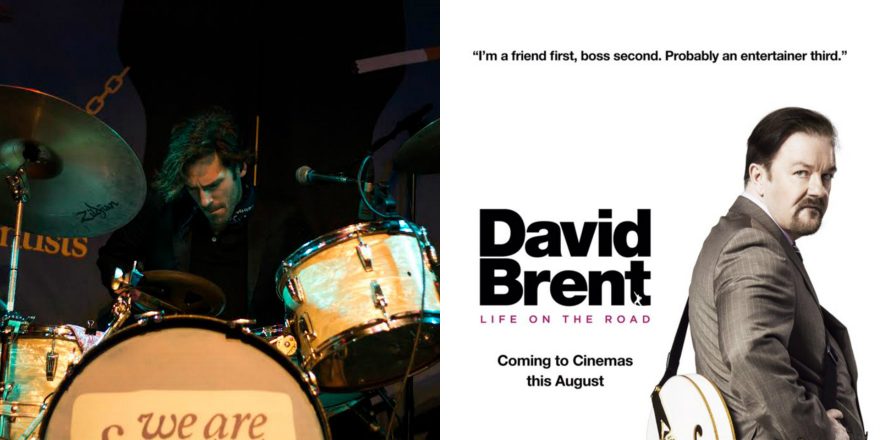 Keith Carne (We Are Scientists) on Life on the Road in the U.K. — and Ricky Gervais’ Latest Film