Josef Kubota Wladyka’s latest film, Catch the Fair One, a taut thriller starring Kali Reis (who is nominated for an Independent Spirit Award for her role), is out now in theaters and on demand. Wladyka’s debut feature, Manos Sucias, won Best New Narrative Director at the 2014 Tribeca Film Festival and was nominated for two Independent Spirit Awards, Best First Feature and Best Editing. Josef has also directed episodes of the acclaimed television shows Narcos, Fear the Walking Dead and The Terror. Residing in Brooklyn, New York, Josef holds an MFA from New York University’s Graduate Film Program and was named one of Filmmaker magazine’s 25 New Faces of Independent Film. He remains committed to making socially conscious genre films.

Some days I wake up and feel like indie films are dying. With so much content being created, it’s obvious the streaming wars are having a profound effect on cinema. How does a film get eyeballs on it when there is so much content out there? If it doesn’t have movie stars to draw in an audience, or if it isn’t an established piece of IP, how are people going to find it? I feel like so many amazing films have flown under the radar in the past few years and an example of this is Takeshi Fukunaga’s second feature film, Ainu Mosir. 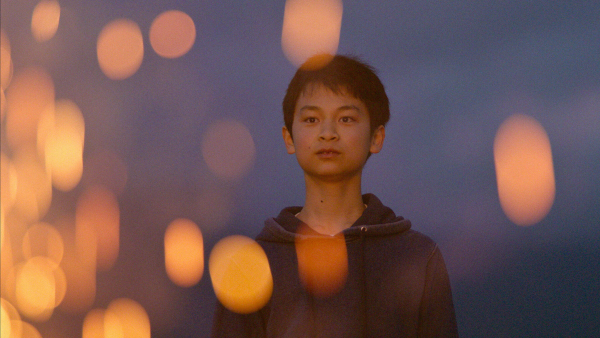 On the surface, this film seems like a straightforward coming-of-age drama. Kanto, a 14-year-old Ainu boy living in Hokkaido, Japan, struggles with embracing his Indigenous culture and processing the recent death of his father. He lives out of a gift shop his mom runs, where the presence of his father still looms. He likes to play Chuck Berry with his band, mess around with his friends, and dreams of moving out of the small town to bigger and better things.

It all seems pretty standard until Debo, his father’s friend and a community elder, takes Kanto under his wing. They embark on a camping trip to the sacred forest, where Debo teaches Kanto Ainu traditions, in the memory of his father. The trip ends with Debo asking Kanto to keep a secret. He introduces him to Chibi, a bear cub caged in the forest that Debo wants to keep hidden. Kanto immediately falls in love with Chibi and gladly accepts Debo’s offer to take care of him. Little does Kanto know that this bear is being taken care of to be sacrificed in an Iomante – a controversial Ainu ceremony that some people cherish and some think shouldn’t be performed anymore. 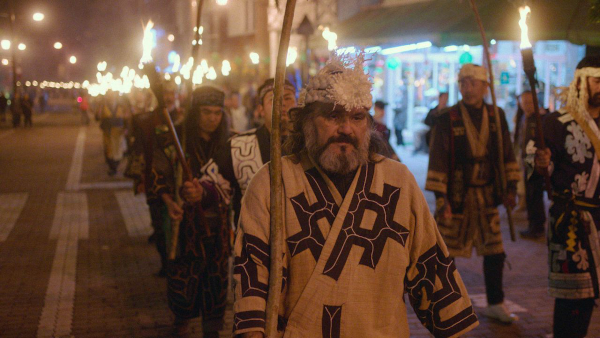 Fukunaga does an extraordinary job taking the audience into this world with care and sensitivity. Over the course of the several years he spent making this film, he clearly put time in building trust and working with the community. A lot of the cast are non-actors playing versions of themselves and Fukunaga is able to elicit performances that are subtle, natural and oftentimes very powerful. Some of the most compelling scenes are the meetings of elders, where they discuss which traditions are important to hold onto and how they’ll be viewed in an ever-changing world. When the veil of tourism is lifted, we see a people grasping at the bloody traditions that remind them that their way of life is a spiritual connection to their Gods. Fukunaga creates such realism that at times it feels like we are watching a documentary woven into a precisely designed narrative film. It constantly questions the idea of tradition vs. livelihood. Yes, the Iomante is controversial, but for some of the elders, and especially Debo, it is completely necessary for them to still feel alive and thriving. 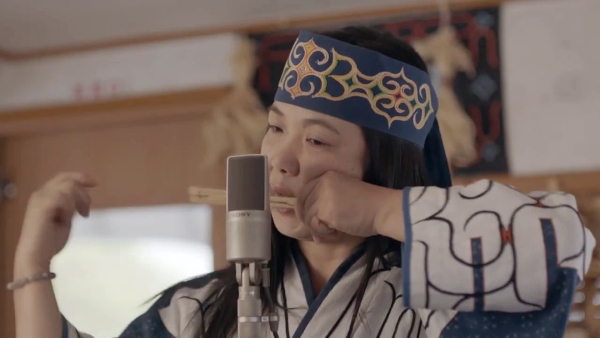 It is easy to rave about the cinematography of this film – Fukunaga and his D.P., Sean Price Williams, shot the film with exquisite framing, composition and naturalistic lighting – but what really grabbed me as a filmmaker was the sound. Ainu Mosir is an incredible piece of sonic art. The score throughout the film is very sparse and the majority of the sounds are diegetic. Fukunaga creates a soundscape that is rich and deep with storytelling: the twang of a Mukkuri; intercom speakers blaring directions to tourists; chanted prayers; insects buzzing in the forest; and rain gently falling on water while a Mikari knife cuts open a fish. Fukunaga uses a hypnotic trance of sounds that he often repeats as narrative callbacks throughout the film. The overall sonic experience is so rich that I recommend taking a weed gummy (or maybe half of one) and listening to Ainu Mosir with the picture off. Just lay back and let it take you on a beautiful, mystical journey. 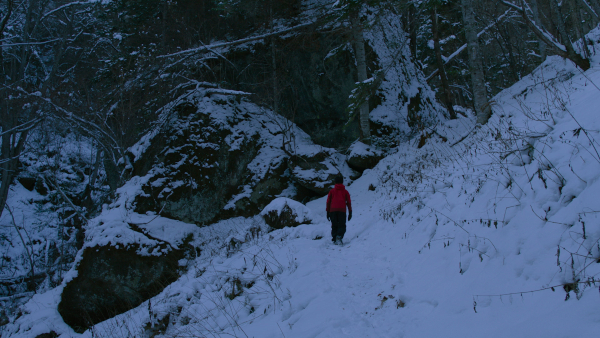 The final 30 minutes of Ainu Mosir are riveting. The emotional stakes rise as Kanto struggles with the decision to release Chibi or allow him to be sacrificed. It all comes to a crescendo when Kanto watches an old VHS tape of an Iomante being performed and then races off into the forest to visit the cave of his ancestors. He lashes out, hurling abuse at the cave and losing himself in the moment. All falls quiet until the most powerful moment of the film occurs: the spirit of his father appears behind Kanto. The two stare at each other in silence and then embrace. This scene brought me to tears and touched me on a very personal level. I was raised by a single mother and was constantly searching for a father figure, especially when I was the same age as Kanto. His character comes across so many father figures trying to guide him, but all he really wants is the embrace of his own father.

I think it’s pretty obvious I’m a huge fan of this film and I can’t wait to see what Takeshi Fukunaga does next. So much time, passion and dedication is put into making these types of films, and it is crucial that we continue to champion and show our love for them so people will find them. So I urge you to go onto Netflix, log in (or use your mom or cousin’s account) and search for Ainu Mosir. It will be a breath of fresh air in the never-ending sea of content.

Josef Kubota Wladyka’s latest film, Catch the Fair One, a taut thriller starring Kali Reis (who is nominated for an Independent Spirit Award for her role), is out now in theaters and on demand. Wladyka’s debut feature, Manos Sucias, won Best New Narrative Director at the 2014 Tribeca Film Festival and was nominated for two Independent Spirit Awards, Best First Feature and Best Editing. Josef has also directed episodes of the acclaimed television shows Narcos, Fear the Walking Dead and The Terror. Residing in Brooklyn, New York, Josef holds an MFA from New York University’s Graduate Film Program and was named one of Filmmaker magazine’s 25 New Faces of Independent Film. He remains committed to making socially conscious genre films. 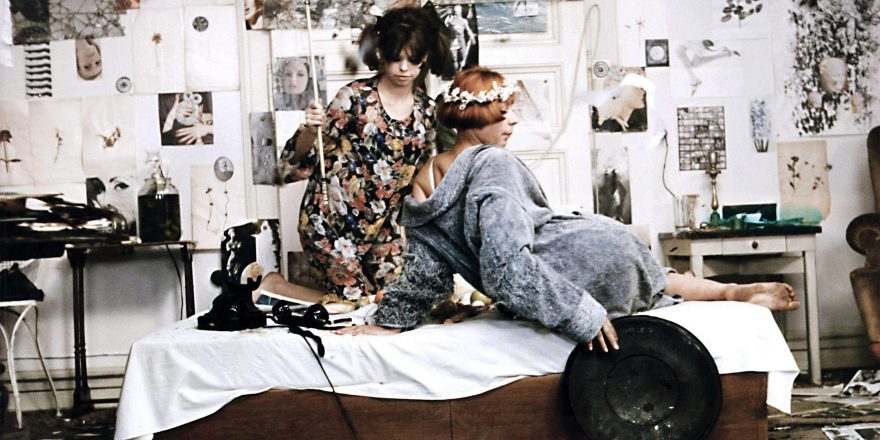 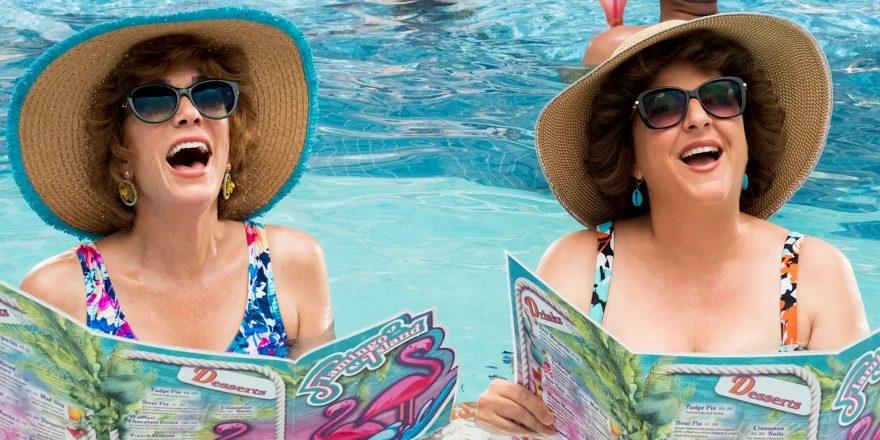 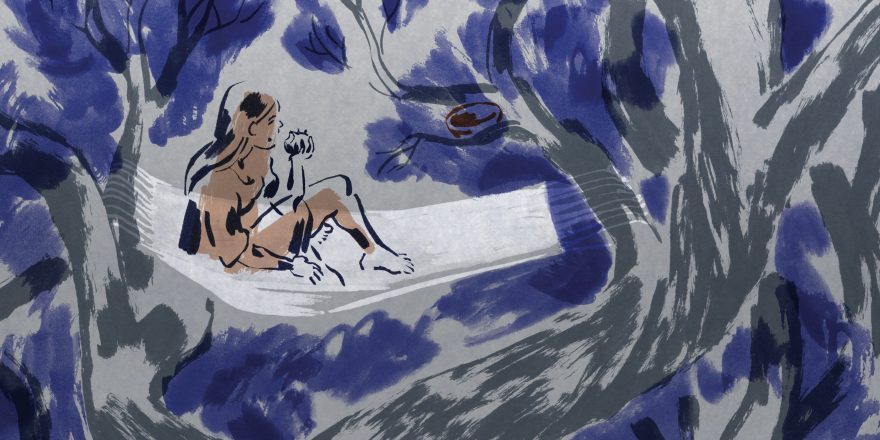 The Innovative, Inspirational Beauty of The Girl Without Hands