Known for directing and executive producing Adult Swim’s groundbreaking late-night comedy The Eric Andre Show, Kitao Sakurai began his eclectic career as a child actor in Cleveland, Ohio. As a teenager, Kitao dropped out of school, moved to New York and entered the world of opera and experimental theater, collaborating with renowned director Doug Fitch on productions at the Stockholm Royal Philharmonic, Lincoln Center and elsewhere. Kitao then shifted his focus to cinematography, lensing numerous rap videos and indie features such as Ry Russo-Young’s You Won’t Miss Me. In 2010, Kitao wrote and directed the internationally celebrated feature Aardvark and shortly thereafter began his collaboration with comedian Eric Andre. His latest film, the award-winning short The Passage, written by and starring Philip Burgers, is now online.

When Philip Burgers and I made The Passage – a modern-day “silent film” where Phil’s character navigates through a maze of people and cultures – several key creative choices became very important to us in defining the unique identity of the film. In this article, I’d like to detail some of those choices, and illustrate what can be revealed through the commitment to a choice.

A little introduction – I was born in Japan, became a child actor in Cleveland, and have been involved in making work for the screen ever since. In 2010, I wrote and directed a feature called Aardvark, and shortly thereafter co-developed The Eric Andre Show, which I now executive produce and direct.

I was very fortunate to link up with Philip Burgers, the star and co-writer of The Passage. Phil is an absolute genius performer-director who comes from the world of clowning. Phil studied at Philippe Gaulier’s clown school in Paris (where Sacha Baron Cohen learned his craft) and won the Edinburgh Fringe Festival with his entirely silent one-man show. Phil also runs the Lyric Hyperion Theatre in Los Angeles, a welcoming home to new and experimental performance.

When Phil and I started working on The Passage together, we recognized that we came from different backgrounds and held very distinct perspectives, but quickly made a pact to never compromise our shared commitment to the ideas we thought were the most interesting and resonant. Here are a few of them: 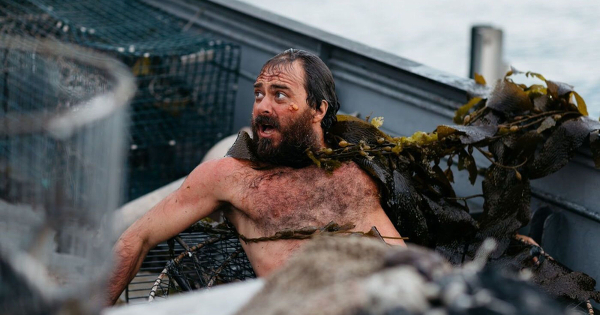 Wordlessness: In The Passage, we decided to have Phil’s character not utter a single word. This choice quickly became a fundamental guiding theme for us. We wanted to fully embrace the challenges of telling a story and creating comedy without using words, and those limitations actually opened up a lot of ideas. Since Phil has done a lot of performance using pantomime and clowning, this was a great jumping-off point for exploring Phil’s wordless journey into other worlds. One of the key ideals of clowning is the practice of taking a single, very simple idea – such as not being able to use words – and having the patience to see where that one idea takes you.

A Square(-ish) Frame: An important aesthetic choice was to shoot the film in the 1.33 aspect ratio. This decision is, in a way, an offshoot of the primary decision to rely on physical performance to tell the story. To me, there is no better compositional frame to showcase the human body in action than the the square-ish aspect ratio of old TV sets and silent movies. We felt that a commitment to physical comedy also required a commitment to the best visual showcase. The 1.33 aspect ratio predates film by millennia, dating back to the ancient Greeks, who described it as the “golden ratio,” found in both nature and art. The natural, humanistic beauty to this aspect ratio helps to underline the emotional and conceptual themes of The Passage. Using a 4:3 frame also serves as a subconscious nod to the films of Charlie Chaplin, Buster Keaton and the other physical comedy greats who used their bodies on screen as the sole canvas of their ideas. 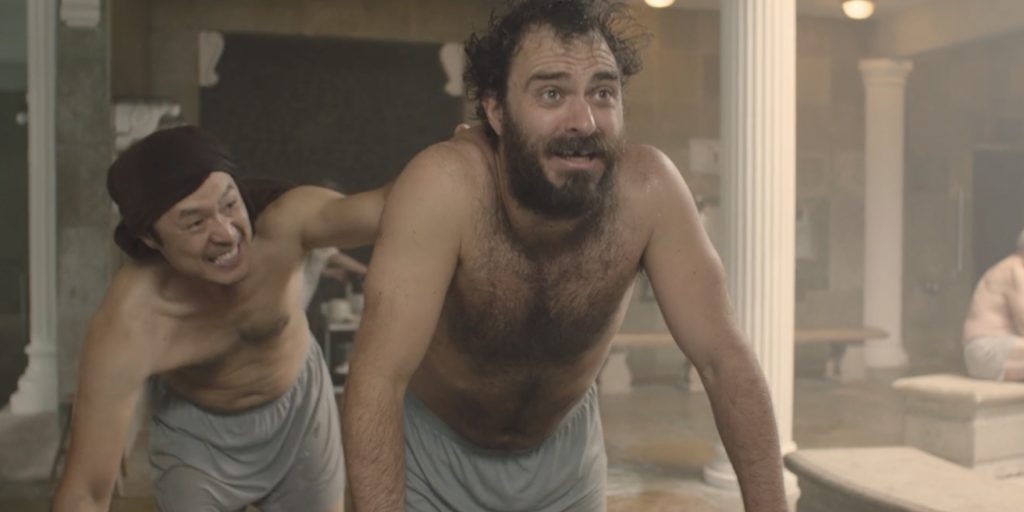 Single Takes: The element that gives power to any creative choice is danger. All audiences are subconsciously attuned to whenever something doesn’t feel “safe,” so when one makes a creatively dangerous choice – even if sometimes it isn’t necessarily the right choice – the audience is invariably attracted to the danger. For us, the idea of doing all the scenes in single takes imbued an important sense of risk into the act of filming that I believe can be felt on screen. The other reason why we liked working with single takes was the ability to fully immerse the audience in the world we had created. Having a “simple” approach to the filmmaking – with very few cuts – helped us create moments that feel honest and unencumbered. Sometimes the most direct approach is the most difficult to execute, though, because you can’t rely on tricks or flourishes or the “safety net” of coverage. 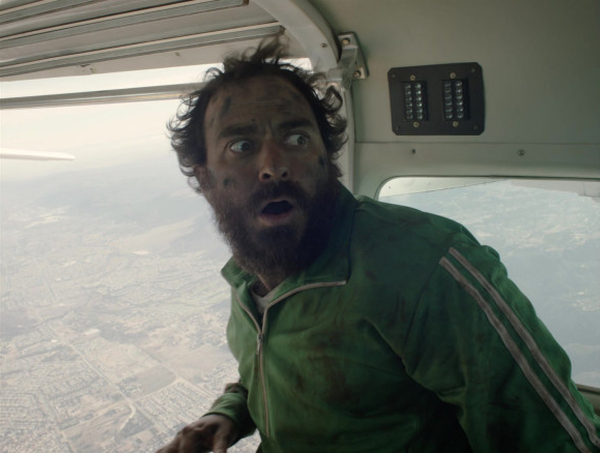 Actually Jumping Out of an Airplane: The first scene in The Passage takes place in an airplane flying over the desert. Various people speak with Phil and then leap out of the open airplane door. As the first scene in the film, the choice to shoot this scene “for real” – actually having our actors jump out of a real flying airplane in one single continuous take – was a risky one. It would have certainly been easier and more controllable to shoot this scene on a soundstage against a green screen, but doing it “authentically” imbued the scene with an ineffable sense of danger and reality. To us, shooting the scene in such a way foreshadowed the themes of the film and attuned the audience to what they were about to be exposed to. 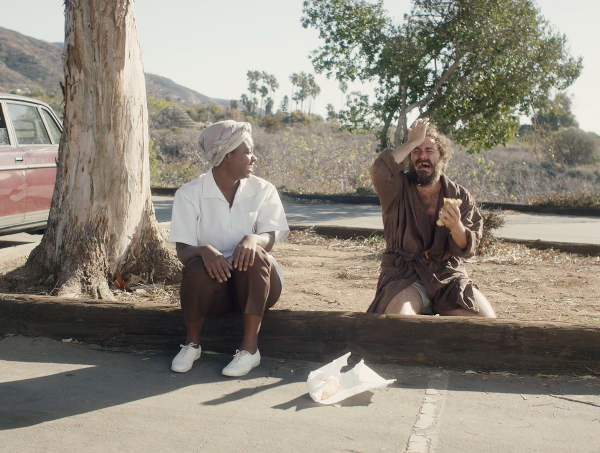 A Non-Subtitled, Non-English world: While Phil’s character doesn’t say a single word, there is a lot of speaking in The Passage. However, there is no English spoken, and we make a point not to subtitle anything. In part, this choice had to do with wanting to keep the film in Phil’s perspective (since Phil doesn’t understand what’s being said, neither should we), but more importantly we wanted to make something that could be universally understood without the use of language. Committing to this choice really forced us to be more creative visual storytellers, and to make a comedy that could transcend language and cultural boundaries and ultimately presents a message that we all belong to the same human race – that we are one. This felt like an important theme to put out into the world right now. Obviously there is a lot of xenophobia, nationalism, and dark thoughts and feelings swirling around the cultural landscape right now, and we wanted to create a film that subtly stood in opposition to those ideas.

The fundamental building block of any creative act begins with a choice, and strong choices can become the bones of a project – the structure that eventually holds meaning. Whether a certain choice is “right” or not can be endlessly debated, but what is undeniable is the strength of an audacious choice, a choice that is uniquely your own.

Known for directing and executive producing Adult Swim’s groundbreaking late-night comedy The Eric Andre Show, Kitao Sakurai began his eclectic career as a child actor in Cleveland, Ohio. As a teenager, Kitao dropped out of school, moved to New York and entered the world of opera and experimental theater, collaborating with renowned director Doug Fitch on productions at the Stockholm Royal Philharmonic, Lincoln Center and elsewhere. Kitao then shifted his focus to cinematography, lensing numerous rap videos and indie features such as Ry Russo-Young’s You Won’t Miss Me. In 2010, Kitao wrote and directed the internationally celebrated feature Aardvark and shortly thereafter began his collaboration with comedian Eric Andre. His latest film, the award-winning short The Passage, written by and starring Philip Burgers, is now online.