I grew up enjoying the absurdist humor of Monty Python’s Flying Circus. So how about absurdist cinema? The concept of the mid-’90s Leprechaun franchise was proudly ludicrous — a little person Jason/Freddy/Chucky amalgam with an Irish twist terrorizes and kills most of the supporting cast. But he was never really scary.

When I directed Leprechaun 3, I decided to embrace the absurd, revel in it, and make it as much fun as the formula allowed. Lep 3 is set in Vegas, the capital of greed and broken dreams, an ideal hunting ground for the Leprechaun. The film’s production company, Trimark, only wanted to spend $1.2M on Lep 3, $300,000 less than Lep 2, intending it to round out the franchise. But I skewed the script toward comedy, and my approach paid off. Leprachaun 3 shipped 55,000 units, making it the highest-selling independent made-for-home-video movie of 1995. So Trimark decided to extend the franchise.

As the next chapter, Trimark had originally wanted to put the Leprechaun aboard Apollo 13. “Trimark, we have a problem” — an idea that started as a joke poster for their Christmas party. I thought the Aliens formula — space marines hunting down a deadly creature — would offer more scope. Also, a variant on the iconic “chestburster” moment had formed in my mind.

An appointment was set for myself and producer Jeff Geoffray to pitch it in front of Trimark’s boss, Mark Amin. This was not a slam dunk. There were other executives around the table who favored other concepts. Mark Amin entered, dressed dapper casual and exuding a quiet authority. I noted the general change in body language around the table as Mr. Amin sat down.

Here’s my somewhat hyperbolic recollection of that meeting.

I suggested that Apollo 13 was a very small environment for the Leprechaun to wreak his havoc. Why not use Aliens as the matrix? Space marines hunting down a creature, which happens to be the Leprechaun. 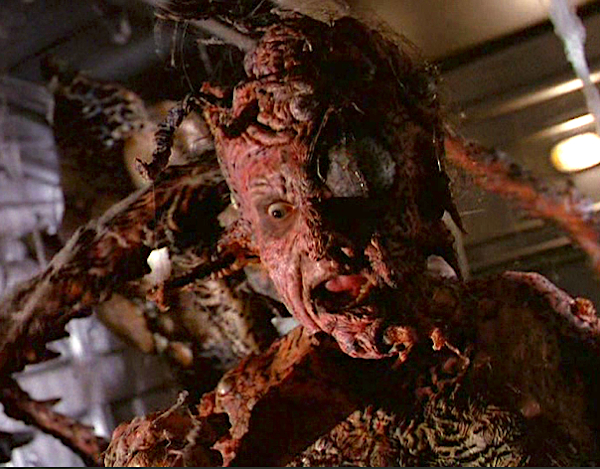 Jeff and I had not discussed my vision for the movie beyond an overall framework that could be achieved for the budget. The pitch was now veering into unknown territory. But Jeff seemed unconcerned, thinking no doubt that I never seem to be at a loss for words on the subject of film. In fact, sometimes it was hard to get me to shut up. He knew I would think of something.

Me: There are so many great scenes to choose from … but how about this? If you are going to do an Aliens homage, well, you’ve got to have a scene where the creature bursts out of a character’s body, right?

Mark Amin: That scene has been copied many times.

Executive 1 (interrupting): The Leprechaun is three feet tall. How does he get into the man’s body without him realizing it?

Another executive grabs the coattails:

Executive 2: Are you going to do the whole face hugger thing? We’re looking for originality here.

Oh, you guys are a tag team? You want originality? OK.

Me: The space Marines ambush the creature on a desolate planet, blowing him to pieces. Then, in a gesture of Marine pride, the most macho Marine decides he will piss on one of the body parts. So we do this shot from behind his spread legs …

The voltage in the room goes up a notch. The golden shower of Farrelly Brothers’ bodily function comedies had not yet rained down on Hollywood. But I charge on, oblivious.

Me: The actor squirts an unseen tube of amber fluid down onto, say, a dismembered leg …

In the morality of cinema, severed limbs are not offensive. Urine streams are. The execs steal glances at their CEO, who remains attentive, but impassive.

Me: But what the Marine does not see, and we do, courtesy of our CGI guys, is a tiny, glowing green ball traveling upstream, so to speak.

Me: So, the pay-off comes back on the ship when this guy and a sexy lady Marine find a quiet corner to get it on. She’s got her hand in his pants, and suddenly he’s saying, “Not so rough – you want to take it home with you?” And she can’t understand, because she has a diploma in hand jobs …

I suspect by now there were some “Glad you brought him in, not us, pal” looks being exchanged. Jeff and I did have one Trimark executive supporter at the table, Jonathon Komack Martin, who had never been a fan of playing Leprechaun straight, and had supported our comedy approach to Leprechaun 3. He could tell where I was going with this.

Me: Suddenly, the marine recoils backwards, his pants start to bulge and pulsate — via tubes and bladders, of course … Then he sinks to the floor, so special effects can get access from below. He screams as the Leprechaun erupts out of his pants on an invisible wire, flies through the air and lands in front of them both saying: “Next time, m’ lad, you should use a prophylactic!”

The last line came in thick Irish brogue. Stunned silence. Who let this lunatic into the building? They look to the boss. His expression is studious.

Mark Amin: So the Leprechaun comes out of … the man’s penis …

Me: Yes! Perhaps too much enthusiasm.

A massive reversal of body language ripples through the executive ranks, followed by Rapture at the Brilliant Scene!

And that was how Leprechaun 4: In Space was greenlit.