Illinois musician Alec Watson writes songs under the pseudonym DPCD. Named after a four-letter secret code given to him by his great-grandfather, DPCD makes music that is mysterious and yet warm, self-described as “Extremely Medium.” DPCD will release their new record, It’s Hard for a Rich Man to Enter the Kingdom of God, on October 1. 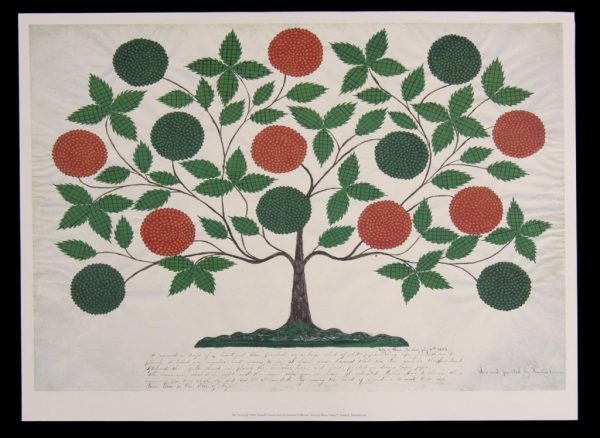 The first time I saw Hannah Cohoon’s The Tree of Life, a spirit hand reached out and grabbed my arm. I had been browsing a book of American Folk Art when I saw it in the Shaker section. My eyes traced over the illustration: the tree, its bower of spiny leaves, its orb-like fruit, and the scrawl of illegible text below it. I counted the fruit: 14 in total, seven orange, seven green. I noticed leaf groupings in fours. The tree was balanced but asymmetrical, ordered but wild, and conveyed an eerie sense of otherworldliness. The spirit hand asked me to turn the page.

Hannah Cohoon was a member of the Hancock Shaker Village in Western Massachusetts. Called “The United Society of Believers in Christ’s Second Coming” by its members, the religious movement is equally known for its art, its radical communal organization, and its requirement of celibacy. Cohoon’s work emerges from a period of Shaker art called the Era of Manifestations, a spiritual revival in the mid-1800s that produced songs, dances, and intricate works of art that they referred to as Gift Drawings. 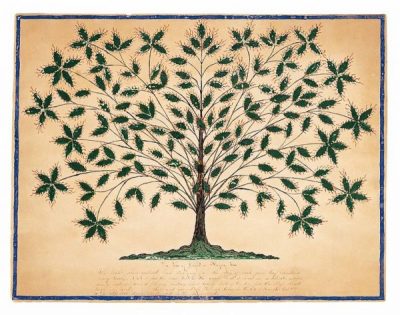 At the time, I was trying to write music that would have an effect on the listener like The Tree of Life had on me. I wanted to write songs that were windows into another world, containing commonplace imagery and domestic detail, opening doors to mysterious rooms. I tried to weave together acoustic guitar textures to get lost in and write words that illuminated the texture but stayed behind it. Music that hypnotized more than explained.

The Shakers were founded and led by Mother Ann Lee, who created doctrine from Quaker traditions mixed with new divine inspiration. Lee claimed that marriage was an earthly arrangement, and that Shakers were to live by the rules of the Kingdom of God. The Shakers outlawed marriage and required celibacy for all community members, separating working and sleeping by gender. The only way the community grew was by converts joining, which happened frequently because of the economic stability of life within Shaker villages. They took care of poor folks who needed food and shelter, farmed the land for food, and made products to sell to the outside world.

I started to study more Gift Drawings, learning about artists like Polly Collins, who drew brightly colored circles of buildings and flowers, and Polly Anne Reed, who drew a detailed map of what she said was a spirit city. I was obsessed, looking in the art section of every bookstore I came across in hopes of finding more Shaker art and discovering new artists. I felt like everything I could imagine was contained in these drawings, and I wanted more.

Why was I so interested in the Shakers? For one, I liked art that engaged with the connection between the material and the spiritual. Also, as someone interested in alternatives to capitalism, I was compelled by the economic organization of Shaker life. But I sensed that there was something deeper in my connection to the Shakers, something I was afraid to look at.

Most Shaker art outside of the Gift Drawings is stark and minimal. In Shaker architecture, ornamentation is prohibited. Their furniture design elevates function above all else. Decoration and visual art was forbidden. In studying these things, I noticed a theme of repression emerging: sexual repression, tightly controlled aesthetic expression, rigorous work schedules, and rules for relationships and gender. Shakers were insular. They believed they held a truth that made them close to God, closer than those in the outside world.

There were clear parallels between the Shakers and the Evangelical Christian world in which I grew up, a world I was beginning to process. Both communities had a fear of the secular world, a fear of sex, and a spiritually regulated morality. Like the Shakers, I had inherited a conception of God that came with boundaries and rules. Breaking those rules risked, at best, community disapproval and, at worst, eternal separation.

I now saw the Gift Drawings in a new light. They were acts of freedom; forbidden visual expression bursting forth from a repressive environment of rules, control, and gender expectation. I came across Gift Drawings that were wilder, more symbolic, and less logical. These drawings seemed to purposefully eschew being interpreted — they were made up of freely placed letters, shapes, and symbols. I started to write music that pushed out at the boundaries of my belief system, my limits, my conception of God and my conception of the world. The way these songs came out wasn’t coherent or expository. They were like the ecstatic drawings, symbolic, vague, resisting interpretation. I knew I wanted to say something, but I couldn’t put it into words. Did the Shakers who made these ecstatic drawings feel this way? Did they ever doubt the goodness of their community? What were they trying to communicate? 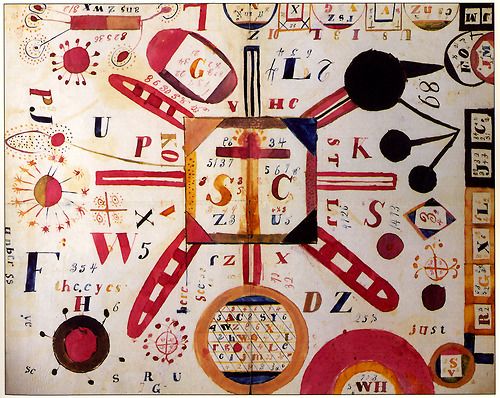 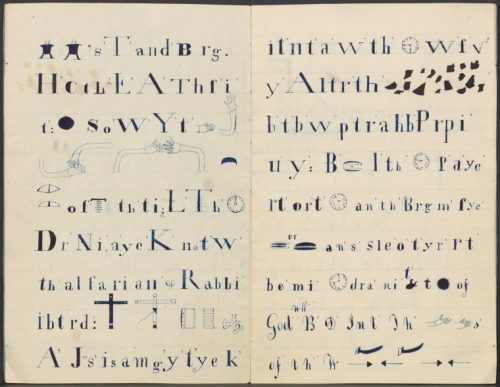 My experience of personal spirituality started to intensify. There’s an element to Evangelical spirituality where God is like Santa Claus — “He sees you when you’re sleeping, he knows when you’re awake.” This watchfulness is explained as benevolent. God cares about you, watches over you, protects you. Growing up, I took comfort in the idea of an all-knowing and all-seeing presence. But this feeling of being constantly observed and measured started to turn into paranoia within me. “He knows if you’ve been bad or good, so be good for goodness’ sake!” This spiritual gaze became accusatory, even horrifying. What if I wanted to escape the gaze? What if I wanted to be alone? “T h e  e y e s,” reads a small bit of legible text in one of the ecstatic gift drawings. I imagined God as an eye above a giant chessboard, watching all of the pieces move, willing the ones he wished, ignoring others. I felt the eye against the back of my neck.

There are many reasons one comes into conflict with their faith. For me, it was coming to see the ways in which the Evangelical belief system harmed me, harmed my Queer friends and family, and had thrown its lot in with the evil forces of empire and capital. I created distance where distance was needed, and with that, the feeling of being watched faded. I thought about these different images: the Eye, the Chessboard, the Tree, and how I’d seen God in each of them. I was glad to be away from the Eye, but I missed the Tree. I felt loss. I wrote music about Hannah Cohoon speaking to me in a dream, imagining her comforting me in my sadness and saying, “Yes, I have felt that way too.”

I wonder if Hannah Cohoon ever considered leaving her community. Did she ever find the environment, for all of its promises of togetherness, purity, ecstacy and spiritual union, too painful to inhabit?

The songs I write now don’t answer any of these questions, they only state them more directly. The new album I’m releasing is called It’s Hard for a Rich Man to Enter the Kingdom of God. It is music about the process of coming to terms with my religious upbringing, and moving forward. The inspiration from the anti-capitalist nature of the Shakers is there, and the images from the Gift Drawings stay with me. But these new songs are not windows into another world. They are illuminations of this world, the one I live in and love. They are an attempt to heal myself and others, and to search for a sense of wonder.

I once asked a friend what it meant that I couldn’t synthesize my past beliefs with my current ones. I shared with him how the images, stories, and songs of my past faith have continued to linger with me. I asked him what I should do with them. “You don’t need to do anything with them,” was his response. “You just carry them with you.”

Illinois musician Alec Watson writes songs under the pseudonym DPCD. Named after a four-letter secret code given to him by his great-grandfather, DPCD makes music that is mysterious and yet warm, self-described as “Extremely Medium.” DPCD will release their new record, It’s Hard for a Rich Man to Enter the Kingdom of God, on October 1. 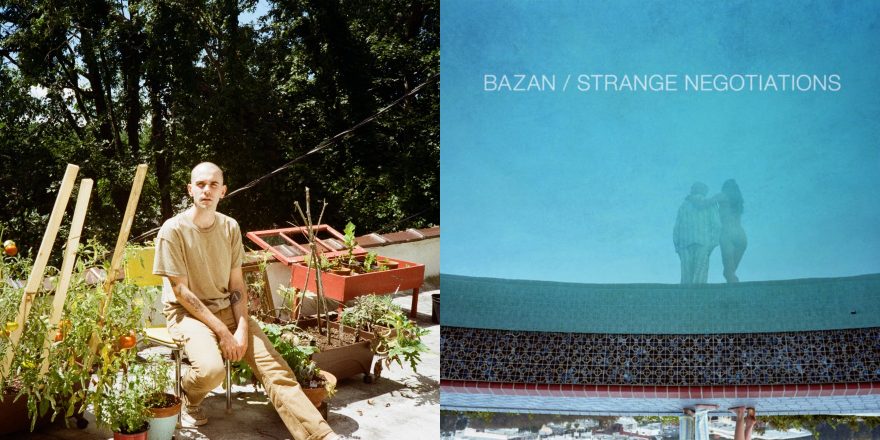 Strange Negotiations Is a Record About Small Compromises 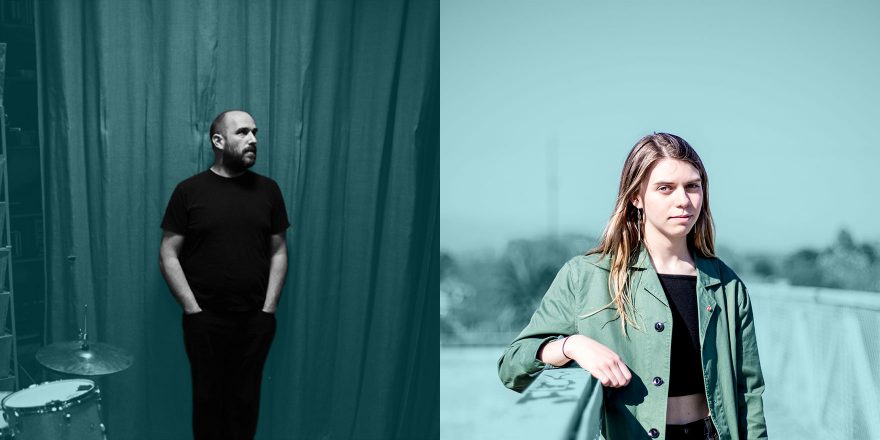 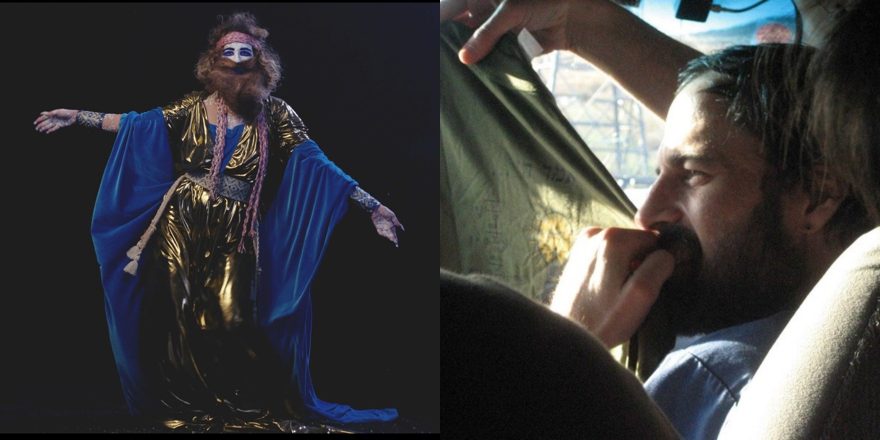