Deeper‘s Shiraz Bhatti, Nic Gohl, and Drew McBride take a thoughtful and direct approach with their songwriting, yielding spry melodies and inventive structures. It’s a clever combination of jagged post-punk and refined indie rock. A tightly wound rhythm section teeters on the edge, but is anchored by intricate guitar interplay and saturated with an enigmatic spirit. Their first album, 2018’s Deeper channeled the anxiety of change in everyday life and navigating the unhinged political atmosphere. Run takes a more existential approach, reaching down past the emotion and staring back at the inner.

Backed by an astutely scientific cover of the John Maus rarity “Bennington”, Deeper sheds the searching bottled up in previous material, carving out an ambit distinctly their own. Brisk, pointed and efficient, and no note wasted, Run b/w Bennington, a new 7 Inch out in October 2019, sets the stage for the Chicago trio’s sophomore LP.

Nic Gohl: Jason, should we start with the band that we both shared in early 2012?

Nic: What did James call the band originally?

Nic: Also, he didn’t tell any of us that it was gonna be called that. I remember we saw a flyer for the show, and one of us was like, “Who’s Freeway Minds?”

Jason: That was 2011, I think? It was kind of the first band that we were in, and then it broke apart and turned into Ne-Hi and Deeper and Dehd later on.

Nic: There was a band called Summer Triangle Love Family that was precursor to some Deeper — there was Nancy Drews, and then Deeper.

Jason: I still have that tape. Hot fire.

Nic: So those are the early days. We kind of met through going to parties in college.

Emily Kempf: OK, how did everyone else come into the web?

Emily: SUPERMAGICAL [playing with] Earring — that’s how I met Jason.

Shiraz Bhatti: My first time meeting you was when Ne-Hi and Nancy Drews played that DIY spot in Logan [Square].

Emily: It was one of the most epic DIY shows. Everyone was crowd surfing, and it was like a weird office space. It was a rager.

Nic: I got zapped a lot at that one. The mic was very hot.

Emily: The stage was like a lake of beer.

Jason: That was kind of at the height of at least our generation’s DIY [scene].

Shiraz: Yeah, it was called… What was it called?

Nic: I don’t know if it ever had a name.

Shiraz: Ne-Hi played there, and there were maybe 300 people there. It used to be an old mattress warehouse and we’d pack people in. When Ne-Hi was playing, the floors were literally bouncing, and the cops came and gave me a ticket for not having a Public Place of Amusement license — it was $10,000. I had to go to court with James to we fight the ticket, and the cops never showed up so the ticket got waived.

Jason: That would have put you down 10 grand.

Shiraz: I was just about to graduate college, and I was like, “I’m done.”

Nic: There were so many people there too. The fucking ceiling was about to collapse.

Emily: That’s cool and terrifying. I’m trying to remember how we all bonded in the beginning days. I remember hanging out with Jason and Eric [McGrady] at Animal Kingdom.

Jason: Eric was always the guardian of the beer. That’s how I met him, because he was in charge of the keg one time.

Emily: I used to wear a Magic Mike style hat that you thought was lame but you didn’t tell me until later.

Emily: No, it was like a little hat and I would wear it backwards.

Nic: Was it bedazzled?

Emily: I don’t remember. I think it was just kind of decorated.

Nic: Can we talk about your bedazzled car?

Emily: I have a car, it’s covered in glitter.

Emily: I want to sand it off. I wanna make it look normal so people don’t stare at me.

Nic: Do you feel like you get pulled over more often?

Jason: They give us weird looks at the border. It’s hard to convince them that you don’t do drugs.

Nic: “You’re glinting in the sun because there’s so many jewels.”

Emily: I wanna sand it off. I wanna erase my hippie past. [Laughs.]

Nic: Have you been to a Phish show before?

Emily: I have not, but I have been to Widespread Panic and String Cheese Incident. [Laughs.] Very similar.

Jason: Who here has been to one?

Nic: I definitely have been to a Phish show.

Nic: One, but my best friend got arrested at the show. He got into a fight with the security guards.

Jason: Speaking of good vibes, though: the Chicago music scene. What was your guys’ first memory of a DIY show?

Emily: I played a show at Situations a million, zillion years ago before I lived here. Then my second one was [when] I first moved here. I biked to the show and was really nervous because I didn’t know anyone yet; I needed friends so I was forcing myself to go to parties and within a couple months I knew everyone.

Nic: I don’t know if you guys remember this, but I have a joint Jason-Emily tattoo.

Nic: You gave me a stick-and-poke, and I asked for a spaceship, and you were like, “I don’t know how to draw a spaceship!” So Jason drew it and you tattooed it.

Emily: I do remember not knowing how to do a UFO.

Nic: Well apparently Jason doesn’t either, because I get told it looks like an over easy egg.

Nic: I also love over easy eggs, so it’s totally fine for me.

Shiraz, what was your first DIY experience?

Shiraz: I think the most memorable one, actually, was going to Animal Kingdom. Going down in that basement — I’m 6’2”, and the ceilings are, like, six foot. The Hecks were playing their classic 15-minute set and it was so hot and so packed. Everyone was bouncing and it was just the best night.

Nic: Still my favorite Chicago band, I think. The Hecks throw it down.

I can’t remember the first show [I went to]; it was either a Treasure Town show with Deacon and Prince Rama, or this place called Shwag City. It was this band Nude Sunrise, who I absolutely loved, lived above some family in Pilsen; you’d walk up the back staircase to their apartment and there’s just this weirdo punk music going on, and they’d have the oven open with the heat on just to heat the apartment. The people were playing in their bedroom and everyone was just looking through the door.

Jason: That’s the overwhelming spirit of all that stuff — people just doing it because it’s what you had to do.

Emily: I remember this one house show in Pilsen that had a bounce castle. Everyone was just wasted and dressed the coolest, and we played in the kitchen. Recently I was reminiscing, because there’s always bounce castles everywhere in the streets in the summer, and I was like, Dude, how much does it cost to get a bounce castle? A couple hundred bucks? They just bring it, fill it up, and then when you’re done, they come and take it away. We should have more house shows with bounce castles.

Jason: We should have brought one here tonight.

So, what’s been going on lately?

Nic: What is going on lately?

Jason: There’s so much good stuff still going on.

Emily: We are one big happy family at Fire Talk.

Deeper‘s Shiraz Bhatti, Nic Gohl, and Drew McBride take a thoughtful and direct approach with their songwriting, yielding spry melodies and inventive structures. It’s a clever combination of jagged post-punk and refined indie rock. A tightly wound rhythm section teeters on the edge, but is anchored by intricate guitar interplay and saturated with an enigmatic spirit. Their first album, 2018’s Deeper channeled the anxiety of change in everyday life and navigating the unhinged political atmosphere. Run takes a more existential approach, reaching down past the emotion and staring back at the inner.

Backed by an astutely scientific cover of the John Maus rarity “Bennington”, Deeper sheds the searching bottled up in previous material, carving out an ambit distinctly their own. Brisk, pointed and efficient, and no note wasted, Run b/w Bennington, a new 7 Inch out in October 2019, sets the stage for the Chicago trio’s sophomore LP. 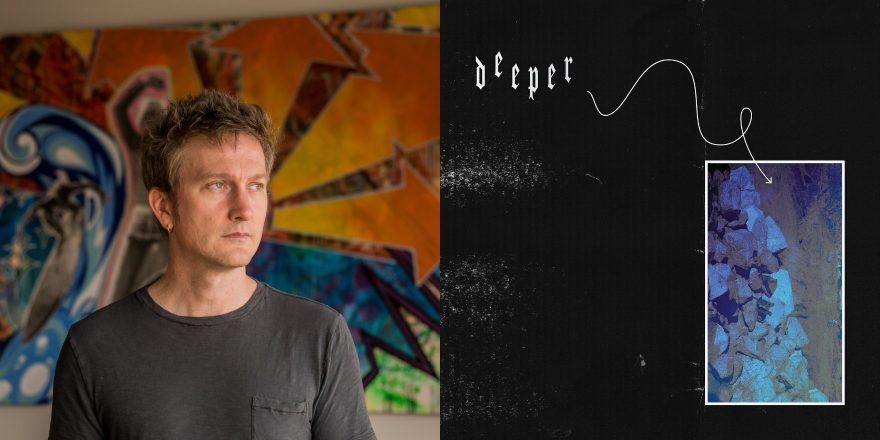