One of the questions I’m most frequently asked is who are my influences as a director. It’s hard for me to narrow it down to just one person. Most recently, when directing my latest film, Satanic Panic, I was tackling a script that was a mix of many genres … but leaned heavily into comedy and horror. When conceptualizing my vision and tone for the film, I found myself revisiting four directors that are responsible for my love of comedy, horror, the weird and the whimsical. I call them “the four Johns”: John Carpenter, John Hughes, John Cameron Mitchell and John Waters. They are probably my longest cinematic relationship.

The first John I fell in love with was John Hughes, may he rest in paradise. The first thing I saw with John Hughes’ credit on it was Home Alone, one of my favorite Christmas films. When I was a little older, my parents showed me Sixteen Candles and The Breakfast Club, then Ferris Bueller’s Day Off and Pretty in Pink. The Breakfast Club immediately struck a chord with me. It was something I could immediately relate to, especially as a teenager who was at the bottom of a cruel middle- and high-school pecking order. I instantly related to Ally Sheedy’s outcast character Allison, but wished I had John Bender’s bravado and confidence. It was also one of the first moments while watching a film that I was really cognizant of the writing and the comedic timing. I became obsessed with the film, watching it nearly every day, to the point where I had the dialogue memorized and quoted it constantly to my best friend. I owned the soundtrack on cassette tape and shirts with the Brat Pack on the front. The film stuck with me through college and my move to Los Angeles. I even got the words “Brain Athlete Basket Case Princess Criminal” tattooed on my right wrist (since I’m right-handed, I always wanted each of them to guide me through my creative endeavors). I eventually saw every film John Hughes wrote and directed. I still watch Planes, Trains and Automobiles every Thanksgiving, and cry every time. John Candy was a national treasure and is an incredibly underrated actor. I revisited a lot of Hughes’ work when I was prepping for Satanic Panic. I wanted to dig into my comedic roots and look at why his dialogue and timing worked so well – specifically the mechanics of it – and apply that to my film wherever I could.

There is a whimsy to Satanic Panic, and for that I took a page from the book of John Cameron Mitchell. I first discovered John Cameron Mitchell when I saw Hedwig and the Angry Inch in 2001, and it was love at first sight. From the moment I saw Hedwig on screen, I was instantly entranced and obsessed. The music, the cinematography, the production design and of course the costumes and makeup. All of it was absolutely flawless. I immediately saw every live performance of it I could, on hometown theaters and big city stages. I was lucky enough to meet John through a friend in New York City. Even though the meeting was brief and I was such an awkward high school kid, he was so kind and signed the jacket to my Hedwig and the Angry Inch soundtrack. I even got to see his last performance as Hedwig in New York City. I used the animation sequence for the song The Origin of Love (along with Creepshow and The Dangerous Lives of Altar Boys) as an inspiration and reference for the main title animation of Satanic Panic. I love the idea of “mixing mediums” within film and including animation in a live-action movie. There is a playfulness that I wanted to embrace within the film, along with a healthy dose of heart, and Hedwig was the perfect guide.

Satanic Panic also has a lot of wild and dare I say … filthy … moments. To help me tackle these moments, I turned to the King of Filth himself, Mr. John Waters. I was a junior in high school when I saw my first handful of John Waters films, Cry-Baby, Cecil B. Demented and Pecker. I hadn’t seen any films like them. I was fascinated with the no-fucks-given attitude and what I found to be very brave filmmaking. It wasn’t until my freshman year of college when I took a deep dive into the rest of his films, starting with Pink Flamingos. Honestly, they blew my mind. I immediately fell in love with Divine and Waters’ cast of characters. Everyone he worked with was so dedicated to him and his films. I bought all his books, read countless interviews and have seen his live Christmas show several times. He’s one of the funniest and smartest creators I’ve ever encountered. When prepping a lot of the wild and rather bizarre scenes in Satanic Panic, I found myself thinking, what would John Waters do? As an indie filmmaker, I have to fully embrace the low-budget nature of moviemaking and Waters was a master of that. I made a point of watching his films with the director commentary on, to learn some of his secrets. He also owns all of the insanity in his films and I wanted to do that too. If he started a cult, I’d be the first in line to worship his brilliance.

Last but not least comes the horror master, John Carpenter. The first Carpenter film I saw wasn’t one of his many horror masterpieces, but was his 1984 science-fiction romance, Starman. From the storytelling to the score, I noticed what a beautiful film it was. It might be in my top three favorite Carpenter films, just behind The Thing and of course, Halloween. The first time I saw Halloween, I was a senior in high school and it terrified me. I had not been that scared of a film since the first time I saw Night of the Living Dead. Carpenter balances character, story and scares effortlessly. One element is never sacrificed for the other, which I think is so important in filmmaking, especially horror filmmaking. John Carpenter’s work is one of the main reasons I pursued the horror genre over any other. I also want to note that Dean Cundey’s cinematography style in Halloween was a major inspiration for Satanic Panic. We even pay homage to the stunningly creepy opening shot of Halloween in the opening of Satanic Panic. My cinematographer, Mark Evans, and I referenced a lot of Carpenter’s films and Cundey’s work when shotlisting and storyboarding the film. I revisited all of Carpenter’s films before shooting Satanic Panic, paying special attention to his masterful score. I think John Carpenter is one of the greatest composers in cinematic history. When deciding on composers for Satanic Panic, I wanted someone who could combine the gorgeous synth sound of Carpenter with the 1970s giallo-rock of Goblin. That led me to seek out Wolfmen of Mars, who blended these two music genres perfectly. Scoring a horror comedy is not easy and they absolutely delivered the perfect score for Satanic Panic.

From Hughes to Waters and Carpenter to Cameron Mitchell, I cannot thank these Johns enough for their contribution to cinema and for inspiring me, an only child from the Midwest who just wanted to make movies, to go pursue my dreams. I hope I’m able to make films as memorable as theirs and maybe help inspire the next generation of filmmakers. 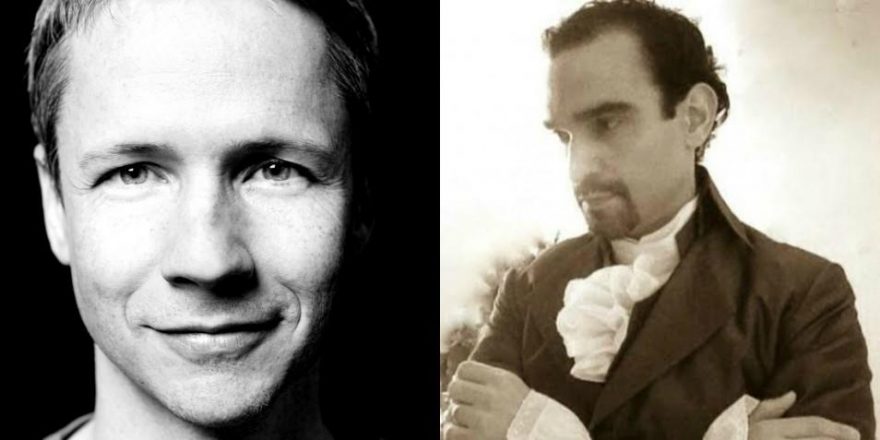 Me and My Mentors: David Fincher, George Kuchar, Curtis Harrington and Tony Conrad