Joe Lynch is a director working in various film genres, from horror to action to comedy (both intentional and unintentional). His feature credits include Everly with Salma Hayek, Knights of Badassdom starring Peter Dinklage, Steve Zahn and Ryan Kwanten, the anthology film Chillerama, and Wrong Turn 2 with Henry Rollins. Lynch also co-stars and executive produces the TV show Holliston and co-hosts the popular podcast The Movie Crypt on Geek Nation with fellow filmmaker Adam Green (Hatchet). He loves jump cuts, practical blood and making his days.

With the release of the new documentary De Palma, there’s been a much-deserved resurgence of discussion over director Brian De Palma’s film work, from his early days of Greetings and Hi, Mom! (two films I worked on as a DVD producer for at Troma, of all places) through his “golden years” in the ’70s and ’80s (Carrie, Blow Out, Scarface, etc.) up to his most recent film, Passion, a few years back. I don’t need to go into the doc’s synopsis much, but imagine one of your favorite filmmakers is alone at a bar, sipping a brandy or some casual spirit, and you mosey up to him, filled with liquid courage, and just start talking. And you happen to get him on a good night, ’cause he’s feeling chatty. De Palma is a warts-and-all account of a great director, his peers and buddies who just happen to be some of the most influential filmmakers of his or any generation (Spielberg, Lucas, Scorsese, et al.), and how his work is both a reflection of the times and also of the man behind the camera – his tastes, his politics, his influences (this will be the only time I mention Hitchcock, however De Palma even states here how he feels he must in a way “carry the torch” for Hitch). This is just a guy, not on a pedestal, but in a director’s chair, and he wants to talk. And boy, will you listen, even if you have only a cursory interest in his films.

As a die-hard fan of De Palma’s work, I’ve been like a kid in the cinematic candy store the past few weeks leading up to this release, poring over all the think pieces, the retro reviews and the reflections from critics, filmmakers and fans alike on social media. My fellow filmmaker buddies and I even got my tickets to see the film for last Thursday night at 10 p.m., not quite the ideal hour to watch a documentary, but, as I’ve said many times in the past as both a cry of creativity or a verbal shrug, “Hey, it’s De Palma!”

Directed by two fellow established directors, Jake Paltrow and Noah Baumbach, De Palma is simplistic in its approach, almost to a fault. The director of such visionary, controversial films as Carrie, Blow Out, The Untouchables and Dressed to Kill, known as a master of camera composition and movement (from one-take jakes to split screens, overhead shots, etc.) simply sits down and talks in front of the camera. There are no other angles or shots, no fancy moves or edits to any B cameras. With the exception of maybe the occasional digital “punch in,” the interview is just the man and his movies, his words and his work as backup. (Fun fact: The interview was shot over 10 days and De Palma, consummate pro that he is, wore the same shirt every day for continuity.)

As I watched the movie, absorbing every word that came out of the maestro’s mouth as he sat in that one spot (in what looked to be a living room), talking with barely any gesticulation, it struck me how interesting it was to have this visual genius just sitting there, almost stagnant. And this was set up by two other filmmakers – not an EPK crew, not a news team used to talking head interviews – two guys who clearly love De Palma’s work. Yet, instead of covering the interview from, say, 12 different angles, maybe slickly employing some of his own techniques, like a split screen or a low dutch, they just leave the camera there, like a confessional. Truth be told, this threw me off at first, but not for the reasons you would think.

I’ve done plenty of these types of talking head interviews, hundreds over the course of my career, which started in 1998 when I was a writer-producer at Troma and beyond. When I was in New York City, I started a metal show called Uranium on Fuse with just a laptop, a PD-150 digital video camera and the secretary (who went on to be one of the top VJs at Fuse), but the structure of the show was interviews with bands and artists, interspersed with music videos (remember those?). Having grown up watching my fair share of TV and movies, I thought I had a good idea of what interviews looked like (watch the headroom, make sure the eyeline is correct, careful of the hair light, etc.), but I also wanted to break the conventions of the form, make these conversations a little more exciting to watch. So from Uranium on, through my days of documentaries, TV, EPKs and other types of interviews, I always felt compelled to “spice up” the frame. Techniques like using a longer film lens (or sometimes a much wider one) to get more depth of field, or tilting the camera a little, or having a “roaming B” (basically a handheld camera getting different shots, usually breaking the fourth wall by showing equipment or light stands in the shot) so there would be ways to cut around the interview. All of this was to fight against creating stagnation in the frame, fearing it would be boring. My MTV-addled, ADD-infused style was to always keep things moving, keep things exciting, because more likely than not, the subject and what they were saying would be boring! I would even try to adapt to the subject; if it was movie-related, I would try to shoot it in letterboxed frames, or with a shallow depth of field or show a camera in the shot. If it was for a band, I might focus on lips and hands, the tools of their trade, or just steal angles from 120 Minutes. But it was a style that fit the medium and evolved well as I went from gig to gig. Or so I thought…

Funny story: When I was at G4 (the now-defunct video game network), we interviewed J.J. Abrams for Mission: Impossible III. I was a fan of Lost and Alias so I was psyched to meet the director for his feature debut, but it was the typical EPK shoot where we’re given 20 minutes and 10 of those were spent setting up and breaking down equipment as we are hustled into the hotel room and out again. Being a fan and knowing a little of his visual style from the past (which M:I-3 seemed to have plenty of; lower angle, handheld close-ups of faces, a common TV trope), I thought, “Hey, J.J. would appreciate how I’m setting this camera up a little lower, a little skewed. I’ll dazzle him with my B-camera work. I’ll be directing Lost episodes in no time!”

Once we were all set, the PR rep rushed in J.J., who immediately he looked at the setup and furrowed his brow a bit. I made an adjustment on the lower, slightly skewed A camera. “You, um, sure you wanna shoot it like that?” he asked. I took this as a test of sorts and stood behind my choice, “Oh yeah, this is gonna look cool, we’re giving it a different, more cinematic feel.” Honestly? The shot wasn’t that great. If anything, once he was in the shot, I knew it didn’t look right, that it was looking up his nose and not that complimentary, but I didn’t want to look like I didn’t know what I was doing, so I held to my choice. “Trust me, it’s gonna look fine.” But as I was swapping batteries on the camera, I looked at the frame and thought, “That is totally ugly and unnecessary. People want to hear him talk, not look up his schnoz.” So I quietly went over as we were about to roll, lifted the frame and straightened it. I didn’t even shoot B camera, I just let J.J. do the talking and the camera did the visual listening. The piece came out fine, especially when the editor was able to cut in some killer shots from M:I-3 (which I dig), and I didn’t need any fancy camerawork to make it work. The point is, even if you’re some douchey “filmmaker” (this was a month before I got my first feature job) trying to make his mark on a simple interview, sometimes you just gotta just rein yourself in and let the artist speak.

So I applaud how Paltrow and Baumbach in De Palma were smart in just setting up one meager camera (which doesn’t even look that high-def) to capture this longform monologue, this auteur’s one-man show of sorts, and just getting the F out of the way. They knew that there was no angle, no shot, no technique, that was going to be better than anything they cut away to. Every time De Palma speaks about a film, the film copiously cuts to and hangs on the footage. The filmmakers knew the power in the frames of De Palma’s many films, that if he’s speaking about, say, the Odessa Steps homage in The Untouchables (which, spoiler alert, he kinda came up with on the spot) or the 360 shot in Blow Out as Travolta loses his mind, all they needed to do to excite the frame was to use those shots. For those who are fans, it’s further dissecting the frame or the moment we know so well, from Sissy Spacek being doused in blood at the prom, to De Niro baseball-batting a schmuck’s head at dinner, or Pacino introducing us to his diminutive friend. For the uninitiated or casual fan who may not have seen the film(s), it’s a wonderfully precise way to hammer home how we should be watching all De Palma’s films right now.

By juxtaposing with all the incredible footage from De Palma movies the most basic talking-head shot of a man in his seventies, discussing his life and love for cinema, it only highlights how fantastic his body of work really is. Even today, more than 30 years past his career peak, De Palma’s films are still ahead of their time visually and make us remember what it was like when directors with bold styles were given the keys to the kingdom. I miss those days.

So, in a way, De Palma should have listed a third director, or at least credited its “second unit” to its own subject. Because even when he’s just sitting in someone’s living room, waxing poetic on his varied and highly visual carer, he’s still manipulating the audience just like he did when he first dropped that bucket of pig’s blood. He’s still the maestro, without lifting a finger.

Joe Lynch is a director working in various film genres, from horror to action to comedy (both intentional and unintentional). His feature credits include Everly with Salma Hayek, Knights of Badassdom starring Peter Dinklage, Steve Zahn and Ryan Kwanten, the anthology film Chillerama, and Wrong Turn 2 with Henry Rollins. Lynch also co-stars and executive produces the TV show Holliston and co-hosts the popular podcast The Movie Crypt on Geek Nation with fellow filmmaker Adam Green (Hatchet). He loves jump cuts, practical blood and making his days. 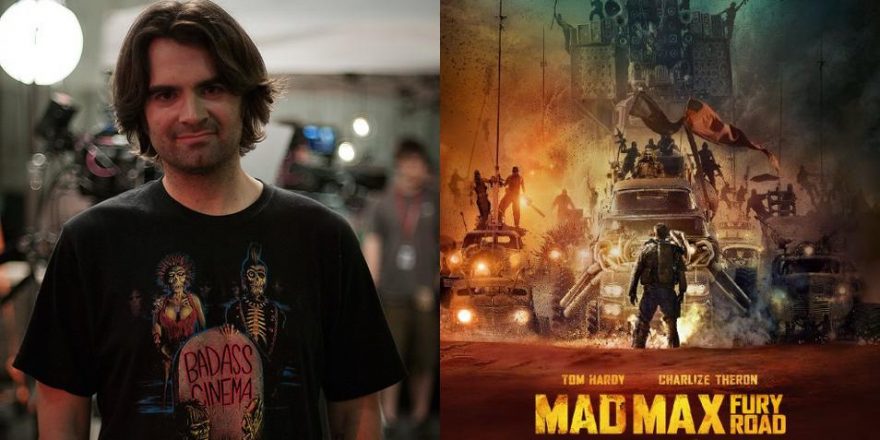