David Barker is a filmmaker and editor whose last feature, Daylight, was a Critic’s Pick in both The New York Times and The New York Post on its release. He edited Josephine Decker’s Thou Wast Mild and Lovely, which will be released later this year, as well as Braden King’s HERE, starring Ben Foster. He’s currently working in Darwin, Australia, as visiting director on the film The Waves by the Karrabing Indigenous Corporation. You can read more about his work here.

What is it that an artist creates?

One summer in Paris, probably about 1995, I got a call from Jean-Pierre Gorin telling me that we’d be visiting Chris Marker that afternoon.

Marker was a huge and mysterious figure for me, the author of not one, but two of those films — La Jetée and Sans Soleil — which so radically redefine a terrain that it’s hard to think outside its boundaries for a while afterwards. He was also famously averse to publicity, seldom gave interviews, rarely presented his films, and never allowed himself to be photographed. So I was intrigued.

His loft in the 20th arrondissement, said to have been a gift from Simone Signoret, was a remarkable space. You took off your shoes. You had a choice of vodka or tea. It was a combination archive, laboratory and work space. I remember a wall completely taken up by VHS tapes, several video-editing stations and, behind a curtain in the back, a 16mm flatbed. I had the impression of several projects happening at the same time, each in a different stage of gestation. Numerous TVs and computer monitors around the space seemed to be gathering information, monitoring news and events from around the world. Scattered throughout were pictures of Guillame, the cartoon cat who became Marker’s public face, as well as pictures of owls, many of them. Mechanical bird calls. I remember it as less messy than as depicted in Agnès Varda’s documentary miniseries Agnès de ci de là Varda(Agnes Varda Here and There), but it was still crammed with aging technology, film and video material, books, pictures, memorabilia from his travels. In one corner, a mattress on the floor was the only sign of domesticity. The Russian documentary filmmaker Marina Goldovskaya was there that afternoon, discussing a footage trade, and I believe the great French theatre director Ariane Mnouchkine phoned about getting some footage Marker shot of a political demonstration Le Théâtre du Soleil had been part of.

Marker had the photojournalist look one might have expected, with close-shorn hair, green pants, white shirt. He must have been in his early seventies at that point. I remember being surprised by how tall he was.

When you entered his place, you entered a parallel world, and during that afternoon my eye wandered over the collections, which represented a world that could only be his. “Why do you think everything’s fake here?” he asks Varda in her miniseries, when she questions an artifact that he is showing her.

Essay films had existed for as long as documentary and narrative, yet he invented a form. In Sans Soleil, he spoke of reality with the freedom and lightness of literature. A travelogue of sorts, the film speaks in the third person of the journeys of a male filmmaker, recounted by an unnamed woman from letters that he has sent her. At one point during his travels in Japan, one of his letters refers to an 11th-century list of “things that quicken the heart” and says: “not a bad criterion I realize when I’m filming; I bow to the economic miracle, but what I want to show you are the neighborhood celebrations.” It is a film about seeing in the age of international travel, and about making sense of what you see.

For filmmakers, Marker gave voice to a certain kind of experience of moving through life and the world with a camera. It was something that only became possible in the ‘70s, but due to the advent of portable video, it is much more applicable for the generations that came after him. I have a close filmmaker friend who grew up as the daughter of diplomats and, before she found her own voice, her self-conception as an artist was really influenced by the tropes of Sans Soleil. I don’t think she was the only one. In making a film about seeing, Marker created a voice for an experience we had, and made it hard to conceive of it anew. Godard had a similar affect on many young filmmakers.

When I first encountered Sans Soleil, it seemed incomprehensible that someone could edit like this, or write so beautifully in the wandering, circular style of Montaigne. I watched the film again and again before beginning to understand some of the principles by which it is put together. Now its freedom of association is more common, though its elegance is not.

Marker’s work is a constant reminder of my own lack of imagination.

His most brilliant films were made on miniscule budgets, with equipment equal to or inferior to what we had in introductory classes in film school. They were shot silently, then edited with soundtracks, allowing the relation to the image mediated by sound to be primary to the editing process. Sans Soleil was made this way, shot on the same daylight spools we used in film school, on an inexpensive Beaulieu silent 16mm camera, the sound recorded on ordinary cassette tapes. TheEmbassy, a Super 8 short made in response to Pinochet’s 1973 coup d’état in Chile, was made this way, and La Jetée, his landmark science-fiction film which became the inspiration for 12 Monkeys, was made even more simply, almost entirely with still photographs. (You can see these and many more in a comprehensive retrospective of Marker’s work taking place from August 15 at BAM in Brooklyn, while Level Five, Marker’s 1997 feature about memory and Okinawa, has its long-awaited US theatrical release that same day.)

That afternoon, Marina Goldovskaya asked if Marker would be willing to speak to her class at UCLA. “Oh, I never do that,” was Marker’s response. “I don’t want to appear with my films and be thought of as a master. I want to stay a beginner.”

What is it that he created? Perhaps his most brilliant creation was himself. Born Christian François Bouche-Villeneuve, he became the elusive Chris Marker, born in Ulan Bator, Mongolia, or perhaps in Belleville, Paris, a philosophy student who joined the French Resistance during the German occupation and may or may not have been a paratrooper in the US Air Force, but who most certainly was a globe-trotting journalist and photographer before beginning to make documentary films. By the 1960s he had become a unique presence, not only in French filmmaking but in the world: the politically committed world traveller who made agit-prop films and cute animal documentaries in equal numbers, and became the greatest practitioner of a form of filmmaking situated between documentary and fiction called the “essay film.”

He told us, “When I say ‘I’, I’m never talking about myself,” and it is this ability to create a character as a space of creativity that is most intriguing, a character who looks at the world subjectively yet with a claim to reality.

A few weeks after our visit, the Paris subway was bombed. “They almost got me!” Marker called Gorin to say. Arrogant, yes, and yet perhaps at the root of the statement is the space of fictionalization of the world. So who was it that they almost got? Not Christian François Bouche-Villeneuve, but the invented persona, Chris Marker.

David Barker is a filmmaker and editor whose last feature, Daylight, was a Critic’s Pick in both The New York Times and The New York Post on its release. He edited Josephine Decker’s Thou Wast Mild and Lovely, which will be released later this year, as well as Braden King’s HERE, starring Ben Foster. He’s currently working in Darwin, Australia, as visiting director on the film The Waves by the Karrabing Indigenous Corporation. You can read more about his work here. 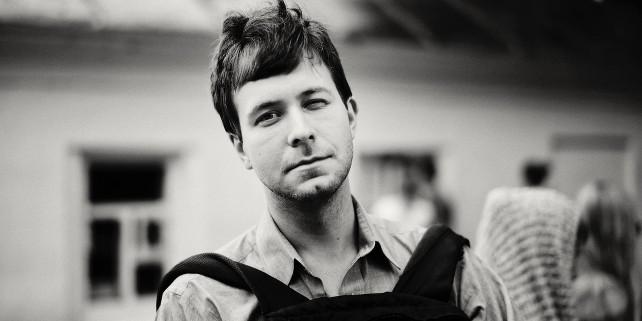