Back when I was just a pretty young thing growing up on the mean streets of suburban Cleveland, like most kids, I couldn’t wait for summer to come. I’d give the finger to the nuns on the last day of school, throw my pencil pouch in the goddamn trash and race back home as fast as my hairless little legs would take me. I knew when I got to the house my mother would be waiting in the driveway with the station wagon already running to take my siblings and me to Holiday Sands, a sprawling water park packed with so many rusty old slides and other aquatic contraptions of doom that it was pretty much guaranteed at least a couple of us would have to be dragged from the water, bloodied and bruised from head to toe, before my mom even had a chance to break out the bologna sandwiches.

But as great as all that was, my favorite thing about Holiday Sands was the jukebox. It sat at the top of a hill on the edge of the park, just outside the concession stand. About once an hour, the park conducted something called “water safety check,” code for making sure there were no corpses floating in the murky waters of the park’s man-made lake. And whenever water safety check came, I’d sprint back to our picnic table, my cut-off jean shorts dripping with water and usually a little piss (there was a reason that water was so murky), hit my mom up for some cash and make a beeline for that jukebox. Since it was the ’80s, all it took was a few bucks to keep the entire park rocking balls for at least a couple hours.

While most people gravitated toward FM radio staples by Fleetwood Mac, Steve Miller, Ted Nugent or Pat Benatar when feeding the Holiday Sands jukebox, for me it was all about Blue Öyster Cult. The band is, of course, best known for the epic “(Don’t Fear) The Reaper,” a song that not only features one of the most blazing guitar solos of all time but also masters the now lost art of using parentheses in a song title. But I always spent my quarters on “Burnin’ for You,” a song that remains one of my favorite summer rock jams to this day. It has everything a summer rock jam should: sweet guitar solos, killer harmonies, bombastic drums and throbbing bass; you can even hear the band members’ mustaches if you listen closely enough. These weren’t boys playing rock & roll — these were goddamn men. In fact, I heard a rumor that Buck Dharma and the guys all tried to go clean-shaven once and those mustaches grew back within a half-hour.

As hinted in the title, “Burnin’ for You” is about a guy who totally wants to get with some chick and hopefully have consensual intercourse with her at some point, a reliable topic if you’re looking to write one of the greatest summer rock jams of all time. But what sets “Burnin’ for You” apart from all the other songs about that stuff is that the guy in question doesn’t even have a home or anything, only he’s such a badass he seriously doesn’t give a fuck — all he cares about is boning this chick, which is awesome.

What makes “Burnin’ for You” even better is the video Blue Öyster Cult made to go with it. It starts off with all five of the band members walking out onto this graffiti-covered stretch of cement under a bridge at night and every one of them is just like, “I’m in Blue Öyster Cult — fuck you.” Then, once they start playing the song, a bunch of street toughs show up to watch them, only the band is rocking so hard they don’t even fucking notice. Meanwhile, the guy I was talking about earlier is just driving around town looking for this chick in this sweet old car that I’m guessing he probably lives in.

About halfway through the song, the chick, who is totally hot in a 1981 sort of way, shows up under the bridge too. Lead BÖC dude Buck Dharma notices her for like a second, but then he’s all like, “I would totally make out with her, but I can’t because I’m about to rip one of the sweetest guitar solos ever in like two seconds.”  Then, from out of nowhere, the dude in the car shows up under the bridge too, before bursting into flames right there in the driver’s seat because by that point his boner is totally out of control. And even though the fucking guy is burning to death right behind them in his car, the guys in Blue Öyster Cult are like, “Hey, we can’t worry about that shit right now — we’re in the middle of playing one of the greatest songs of all time.” But just when you think the guy in the car is toast, he suddenly shows up right next to that chick and you breath a sigh of relief as you realize the guy melting inside the car is just a mannequin or something.

When the video ends, all the guys in Blue Öyster Cult just stand there looking awesome and the hot chick is just stumbling around in front of them all alone like she’s kind of hammered but still having a pretty good time. But get this — the dude from before is nowhere to be found. I’m guessing he was just like, “Great — first I don’t have a home and now my car is completely torched. I’m getting the fuck outta here before any more crazy shit happens.” 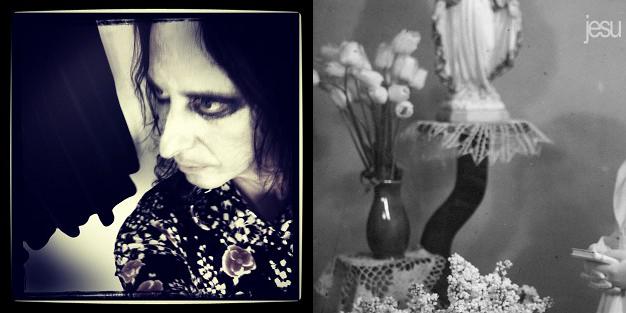