Talkhouse Contributing Writer Zachary Lipez is the former singer for Freshkills and the current singer of Publicist UK. He writes the “Adult Problems” column for Noisey/VICE. He also contributes to Hazlitt, MySpace, and Vol.1 Brooklyn. His most recent book, with Nick Zinner and Stacey Wakefield, is Please Take Me Off the Guest List (Akashic Books, 2010). He tends bar at 124 Rabbit Club. You can follow him on Twitter here.

First, some background: we (Zohra Atash and Zachary Lipez) are a couple. It would be a little odd to be co-writing a piece for Valentine’s Day if we weren’t. We met, many years ago, in the New York City music scene — Zohra being part of the wierd goth/synth scene and Zack a peripheral figure in whatever post-hardcore/mod/whatever scene was most dependent on him for free drinks at the time. Zohra played in a band called Religious to Damn and Zack was in a band called Freshkills. How we met is unimportant, but rest assured that it was very romantic.

We have a collection of poetry, stuffed animals and ex-friends to prove it.

Our day to day is relatively simple: Zack does the laundry and Zohra cooks; Zack helps Zohra return emails (which she hates doing); Zohra helps Zack write melodies for songs (which she is better at); we both read each other lyrics and bat back and forth themes and ideas we’re working on — for both art’s sake and to pay rent — and if it makes the other gasp or laugh we know it’s a keeper. We argue about Pink Floyd. Like most couples these days, we watch the news and cry together.

Like most couples these days, we watch the news and cry together.

Although we are two peas in a pod — for good or bad embracing the social isolation that comes with age and enjoying each other’s company — we’d never really tried to collaborate on a single project until the last year, when Zohra pitched an idea to Bust Magazine to do an online TV show. It was to be modeled on old New York punk and public access shows, free form and instinctive in its tendencies. We wanted to talk to people who inspired us. This was early last year, but Zohra already had a deeply held knowledge that the country was dark and getting darker. Zack was more of the SNL skit caricature of being smugly confident that Trump didn’t stand a chance. Zohra, having lived in her body as a woman and a Southerner and an Afghan all her life, knew better and she wanted to make something that would combat this rising tide. Zack, loving Zohra and already somewhat ensconced in music media, was game. We figured we could whip out the first episode in no time flat. How do you make God (of any faith) laugh? Make a plan, y’all.

We both have different ways of working. Zack is very concerned with the how and Zohra is very concerned with the why. Zack wants short, sharp conversations that result in decisions and, as hinted before, emails. Zohra wants work to be done for a reason, and feels strongly that if one doesn’t know why one does something, it will show in the end product, resulting in facile inanity — something we both agreed there’s more than enough of.

Part of the problem was that both of us had very firm ideas of what we wanted to avoid, and ones we agreed on, but what we were trying to avoid was itself a complication. Zack is both a critic by trade and, knowing just a little too much about how the sausage is made but not enough to be able to change it, a volunteer scab picker on Twitter. Zohra, by circumstances both personal, political and aesthetic has often found herself in the position where she feels forced to say aloud what others only say via text out of concern for careers or avoidance of “drama.” Neither of us is averse to drama. Life well lived is dramatic. But, while we find ourselves with a drawer well stocked with sharpened knives, this is not what we wanted for the show.

We really love each other, but tempers we for sure have.

At this point, everybody knows — as if weren’t telegraphed enough by Leonard Cohen’s death — the good guys have lost. Focusing on the scoundrels seemed destined to give them weight they don’t deserve. And there were so many beautiful people and things we wanted to explore instead. It was difficult to relearn origami when you’ve been brawling in the street for years. We had to regularly remind each other that — even while the TV was telling Zohra that she was not American and Twitter was telling Zack that the Holocaust was good — the people we were interviewing, the poets we were filming, and the miles of digital reel we were devoting to homemade silent movies were all part of the world, too. We were sure to break up these affirmation-laden discussions with episodes of The Good Place and the occasional apartment-spanning, ashtray-breaking scream fest. We really love each other, but tempers we for sure have.

Over time, we filmed interviews with various musicians, artists and schoolteachers we loved: Mish Way, Alsarah and Marisa Castillo, who labors for love in the New York public school system. Our apartment became a sea of post-it notes and notebooks that started as Moleskine and ended as $3.99 Duane Reade college-lined. Tours happened, shifts needed to be covered, family members got sick…and Trump. Always Trump. More than all that, though, was the fact that we were trying to convey nuance and the complications of making art. Dumb shit, at least for us, although we’d argue for everyone else too, comes real easy. We wanted something that felt spontaneous but thoughtful — and in that maybe our eyes were too big for our stomachs. But we like the pizza we like, and that takes time.

As months went by, we’d answer the sweetly nagging emails from publicists and Bust itself, “Yes, we’re still doing the show. It’ll be up soon!” When one of us would shout at the TV screen that this would never happen, the other would say, “Soon. We’ve never done a TV show before. Calm the fuck down.” We took turns. When we were both reaching our limit, our collaborators, Nico Alonso and Jason Akira Somma, would send edits of videos and we’d marvel at them like they were sonograms of a baby dragon. Zohra would sing along to the Gypsy soundtrack. Zack would play “Chains of Love” loudly on repeat. You need to cut yourself slack; take the joy in increments.

The punch line, of course, is that the show isn’t finished yet. And we’re not even spending Valentine’s Day together.

Once, when we were a little blocked, we wrote and recorded a joke neo-folk song for our friend, Drew, on his birthday. When we finished recording it in the bathroom, a finished tangible thing that we’d done together, we knew we’d finish Down in It (did we not mention that’s what the show’s called?) and we’d get married and we weren’t doomed to procrastination; everything was possible. Trump could go eat a dick.

The punch line, of course, is that the show isn’t finished yet. And we’re not even spending Valentine’s Day together. Computers crash and new edits are needed and Zohra is in D.C. finishing and co-penning a comprehensive book of archive of Afghan recipes in conjunction with her sister’s newest restaurant and tea house located in the Russell House and Store in Virginia, which has been flooded since its soft opening last month. It’s important to her in this sea of non-reality, non-fact based news that culture and history not be cannibalized. It happened to our poetry and music — but she’ll get to that later. (Rumi is Afghan will be the epitaph on her tombstone.)

We can see the light at the end of the tunnel, but before we get there, on Valentine’s Day, Zohra will be working ten hours with the restaurant and recipe project and Zack will be crawling our neighborhood, waiting for the Valentine’s candy to go on sale. As Wallace Shawn says in the beginning of My Dinner with Andre (an early inspiration for our show): “The life of a playwright is tough.” True enough, but for everyone.

We strongly advocate for couples to try to make something together.

We aren’t complaining (much). Almost done is almost done and temporarily parted is better than forever so. We’ll take it. The world remains terrifying; the current regime rolls out more insanity every day, the phonies keep doing whatever is they do to sleep at night and sometimes our little patch of the garden can feel woefully out of step with the times. We aren’t alone with each other and we suspect we aren’t alone in feeling like this. We’ll do the work because the work is something we can share. The first episode will go up within a month or we’ll see this world burn.

Even with nothing to show for it yet, we strongly advocate for couples to try to make something together. It’s one of those rare times where “It’s about the journey” is almost true. Happy Valentine’s Day to us and to you and yours. Keep it messy and busily romantic. Do us a favor and text a distant lover an idea for a show or a band. Even the process will be worth it. And if you steal our idea for the show, frankly it will just give us the incentive to finish faster.

Talkhouse Contributing Writer Zachary Lipez is the former singer for Freshkills and the current singer of Publicist UK. He writes the “Adult Problems” column for Noisey/VICE. He also contributes to Hazlitt, MySpace, and Vol.1 Brooklyn. His most recent book, with Nick Zinner and Stacey Wakefield, is Please Take Me Off the Guest List (Akashic Books, 2010). He tends bar at 124 Rabbit Club. You can follow him on Twitter here. 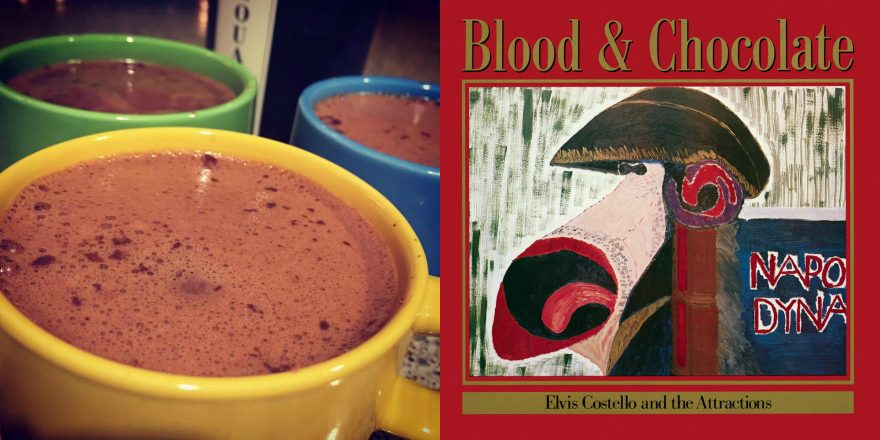 BarRoom Blitz: Here’s What One New York Bartender Has Been Playing During Your Tinder Dates