Chris Walla is a writer, musician and record producer. Tape Loops (2015) is his first solo album since Field Manual (2008).  A founding member of Death Cab for Cutie, he was the guitarist, producer and co-writer from 1997 to 2014. His recent work includes collaborations with S, the Thermals, the Lonely Forest, William Fitzsimmons, and Rocky Votolato.

Between conscious events — tasks, conversations, OS updates — are gaps where intent and desire retreat just a little, and a bit of space opens up for something else to drop in, a little like the space where a leaf can find the ground between rows of crops. That space has value because it is soft and impressionable; it is a perfect place to cultivate wonder and hope, or to sort through sadness and difficulty. It also requires attention because it is prone to weeds. Free and willful access to that space requires noticing it’s there. I needed help noticing.

These gaps prove elusive in the moment, during the day, even as I remember them after they’ve passed. They fill up with status updates and brilliant marketing and, often in my case, Google searches about how to maximize frequent flyer miles or how to do something in a recording platform that I feel I should probably already know how to do. Wresting these gaps from the impulse of external influence felt important but somehow beyond my grasp, maybe impossible. I didn’t know where to start, but I imagined the guidance of an insightful and compassionate friend, someone to accompany me through a spiritual drought of doubt and insecurity.

I stumbled into Paul Bogard’s excellent book The End of Night in the midst of a lot of travel through a lot of time zones. As its title suggests, the book describes our night filled less with stars than with backlit advertising and too-bright LED streetlights; night made of glare, from adjacent gas stations and neighboring cities. He describes modern insomnia, fueled by the small screens whose color temperature mimics the morning — the blue light that signals our bodies and brains to wake up.

This book led me both outside and inward. I began embracing my jet lag, something I’d never done: getting up at 3:00 AM without a whiff of frustration or anxiety, napping in the early afternoon, and going to bed around 7:00. I went for long walks in the dark and I jumped from the tails of tours to vacations in the Arctic winter, eager to taste twenty-one hours of night all at once. My thinking cleared in the stillness, as the world slept, and gradually it became easier to spend time in the present, without distraction. The whole night — my whole morning — became that space between outside obligations, full of personal productivity and wonder. It felt like progress, a start.

The End of Night also led me to Rainer Maria Rilke’s Book of Hours. One piece hit me especially hard:

You, darkness, of whom I am born —
I love you more than the flame
that limits the world
to the circle it illuminates
and excludes all the rest.

But the darkness embraces everything:
shapes and shadows, creatures and me,
people, nations — just as they are.

It lets me imagine
a great presence stirring beside me.

I believe in the night.

I was sold, and I did believe in the night, but my solitude dipped toward loneliness and depression nonetheless. The Norwegian word for the long polar night is mørketid, which is almost literally “murky time,” and I think this broadly captures our dim understanding of night as a spiritual place (or at least it describes our emotional capacity to navigate it). As visual creatures, we can’t see its stories; night’s persistent nuance maddens us when we can’t sleep.

Sleep is Max Richter’s eight-hour lullaby, a hymn the composer intended to be slept through, an experience for the very nearby underworld of subconscious that we all share. Richter’s devotion to the concept has received at least as much attention as its execution: its length is the hook; the story is in its story.

I can’t speak about the execution or experience of Sleep because I haven’t heard it. But its companion album is something I know intimately. From Sleep is just an hour in length, and designed to be listened to while awake — presumably at night, by people like me. Sleep does not share any tracks with From Sleep, though their musical themes are common to both albums.

In his book Religion for Atheists, Alain de Botton writes, “We have grown sick from being left to do as we please without sufficient wisdom to exploit our liberty.”

Wisdom takes many forms: speech, or gesture; a well-timed presence, a poignant omission; a document or curated record. But I believe that the ability to find an open moment — or at least the willingness to try — is the difference between wisdom and mere information. The recipient creates the meaning. The listener is the difference between music and mere content. We complete the music by opening to it.

It is difficult for sensible, practical adults to remember that certain kinds of magic are very real. It is difficult to find the spaces where that magic has a chance to seep in. Max Richter’s From Sleep is helping me find that space.

And the insightful and compassionate friend I described above? I was already here.

Chris Walla is a writer, musician and record producer. Tape Loops (2015) is his first solo album since Field Manual (2008).  A founding member of Death Cab for Cutie, he was the guitarist, producer and co-writer from 1997 to 2014. His recent work includes collaborations with S, the Thermals, the Lonely Forest, William Fitzsimmons, and Rocky Votolato. 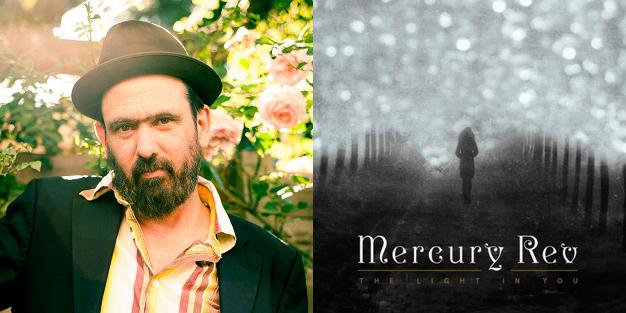