Dogs snout my groin. Cats leap onto my shoulders. Animals like me, and the feeling is mutual. So I have always been attracted to animal projects.

CGI animals get more photo-real every year. But there was a time when the real animal and the lens were all you had to work with. In the pre-CGI era, I was lucky enough to stage sequences involving cats, bobcats, dogs, lions, elephants, boa constrictors, chimps, spiders, scorpions, cockroaches, a dolphin named Flipper, a mud crab, a pigeon and a frog. Working with all creatures great and small requires complex planning, flexibility and infinite patience. I hold in the highest regard the trainers who helped me deliver the shots. Safety of the animal and the crew is the governing issue when working with exotics. They are wild animals after all, and things can go wrong…

Take a look at the trailer for Roar, the most dangerous animal film ever made.

I have occasionally been close to lions, and never had a problem. Or was I lucky? Here I am with five-year-old king of beasts Sudan. However, Sudan’s brother once nuzzled his trainer’s leg in a gesture of feline submission, then suddenly bit him in the thigh. It was a playful nip to the lion, a game he was playing like tag, but a painful puncture wound to the trainer, Hubert Wells, a remarkable man with many big movie credits to his name. He made a full recovery and gave the lion to a wildlife park. Here’s a picture of Hubert presiding over a remarkable animal ensemble. Cats and dogs, lions and chimps are inimical species. It’s not trick photography. How did he do it? The answer is training. Repeatedly rewarding the animals for tolerating each other’s close proximity until it becomes automatic. Hubert and another top Hollywood trainer, Boone Narr, provided the exotics for me on the Tarzan series, shot in Palenque, Mexico. Despite Hubert having been bitten by Sudan’s brother, he and Sudan had a very trusting relationship. In one scene, Hubert doubled an actor who was meant to be killed by the lion. As the cameras rolled, Hubert showed Sudan a chunk of raw meat concealed in his hand, then ordered him to charge. On cue, Sudan knocked him over, then nibbled at the meat which Hubert held beside his throat. Through the lens, with Hubert’s legs kicking violently, it really looked like he was getting his throat ripped out. This was a kids’ TV show! Well, if writers write it, I will shoot it. Here the original TV Tarzan, Ron Ely, guest-starring as an evil hunter, is tree’d by Sudan. Concealed behind the tree is Hubert Wells with a pouch of meat. Food plus positive reinforcement is what movie animals work for – their reward after each take. We could only work Sudan every other day. We needed him to be hungry and motivated after a day on short rations. Not too many takes either. Once he was sated, he just wanted to lie in the shade. So we had to get the difficult shots first.

The first task with an animal sequence is to break it down into individual animal actions that the trainer believes can be achieved shot by shot. A simple example:

Intercut POV of what the Dog is looking at – a Man asleep in bed.

Then you set up a low wide angle and the trainer signals the Dog to walk forward past camera right.

Close up – Man wakes and reacts to:

POV of snarling Dog looking down at him. A rubber band has now been installed around the Dog’s upper jaw, raising the lips to expose the incisor teeth, as if snarling. The Dog is not in fact snarling. The sound of snarling is added in post-production.

The trick is to plan a series of shots which, when edited together, make the animal actions fluid and continuous.

When I first broke down the script of Atomic Dog, it had close to 300 individual animal actions. Yikes! When the dog looked at the driveway gate, then ran and leapt over it, clearing its iron spikes, that worked out to be six different animal actions, six changes of A & B camera positions, to be rehearsed and executed at night. As I said: patience. The lead dog, named Rambo, part wolf, part German Shepherd, was wonderful. Here’s the trailer of the Spanish version, entitled Rabia.

It’s not my best movie. The script was quicksand. The network wanted Cujo – “but make sure it’s not too frightening or bloody for family viewing … ” Right. A neutered Cujo in a clichéd family drama. Got it. Here’s a dog movie in which three out of four dogs die. Dog lovers watching with their kids must have asked, “What were they thinking?” But I did like the TV Guide ad line: I know he’s radioactive, but can we keep him … ?

Noted trainer Boone Narr says the most important part of his job is casting. Just like a director. “Finding the right animal, with the right look and aptitude can take time. Then it’s largely a matter of training the animal to react to visual or aural cues, and to move from A to B, which is where you make your edit to the next action in a change of angle. It is prudent to choose locations and set decoration that take into account the behavior range of the animal in question. “ You always need a backup for your lead animal. Animals may look alike but they have different skill levels and different personalities. Sometimes every performer has a bad hair day, and is uncooperative. Bring on the double. Here I am with Archie (above), a very smart chimp who would peel his bananas slowly and savor every morsel.

Whereas Kiko would just stuff it whole into his mouth. Kiko (above) was capable of much less than Archie. The trainers on Tarzan indulged my need to be close to the animals. Normally they prefer the animal’s relationships to be solely with themselves as the alphas, and with the cast with whom they interact. Too many humans in their lives can confuse the animals and make the trainers’ task harder.

A decade ago, I met Jane Goodall at a fundraiser for a wildlife charity. I admired her courage and her lifelong dedication to her work and still do. Foolishly, I told her how much I enjoyed working with chimps in movies. She looked at me askance, and gave me something of a lecture on how the use of animals for entertainment is physical and emotional cruelty under any circumstance. She said that when I require an animal to be trained to perform tricks for the camera, I am just as guilty of cruelty as someone running a circus or a zoo. I am not often tongue-lashed by iconic figures. So I thought about it, and a Pandora’s box of animal rights issues opened up. It’s a complex, vexing question. I don’t know the answer. It would be a sad day if animal performers were banned from movie sets and only digital creatures remained on our screens. All I can do for my part is make every animal I work with feel that the movie experience is like play, rewarded by food. Actually, that’s how I like to feel on wrap, too. 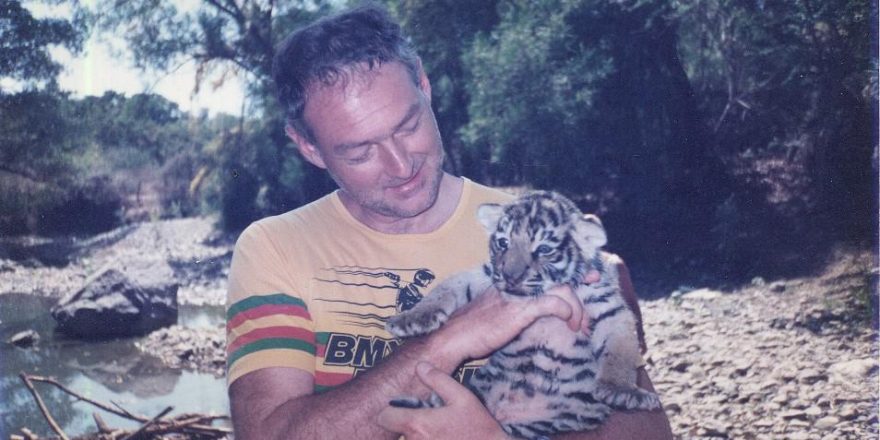