Best of 2020
biking
Evan Weiss
Into It. Over It.
music other

I live in Chicago and used to ride my bike all the time when I first got here, because I was a broke musician trying to save as much money as possible. I was in my early 20s and wasn’t really touring full time, so I was just more reckless with my body. I had this really great bike, but then it got stolen, probably right around the time I did start touring. I didn’t think about riding my bike for years [after that], because, A. I was heartbroken that my bike had been stolen, and B. I was so worried about getting hurt riding around the city — if I broke my arm, or something like that, I wouldn’t be able to tour anymore and it’d be a huge loss of income. (Not to mention that, like most musicians in their 20s and early 30s, I was completely uninsured, so if something happened I’d be pretty fucked.)

A few years ago, I finally felt comfortable enough to buy a new bike, though I never rode it. That would have been 2015, and then in 2017, there was a portion of my job where I’d have to be between two locations, so in the summertime, rather than getting in my car and riding between the two locations which were a mile apart, I’d hop on my bike. I left my bike at the warehouse location of my job, and then COVID happened. I was realizing in those first few weeks that the city was dead silent from 8PM on — there weren’t any cars on the road, no sound happening, no one was out. After three weeks of being inside, my friend circle was doing things like having Zoom calls and playing Mario Kart on Nintendo Switch together remotely; the weather was getting nicer, so I was trying to think of a way to bring everyone together in a safe way, while also thinking about how dead quiet the city was. My only fear with riding my bike ever was the traffic.

So I went to the warehouse and picked up my bike, and I just made a post like, “Hey, would anyone be interested in doing a late night Chicago bike ride once a week?” Just to try to put a crew together. There were a few people who responded. Our goals were:

The first ride that we did, we met up in my neighborhood Logan Square — there were six or seven of us, and we wound up riding down to Wrigley Field. Being near Wrigley Field at midnight on a Friday and having there be no one around was really surreal. There were no cars, no people, no lights, everything was off. And it was only Friday at 11PM! We rode down Clark Street through the Gold Coast, and then up Mag Mile all the way through the Art Museum. We were riding our bikes in the middle of Mag Mile — it was a magical, surreal experience. 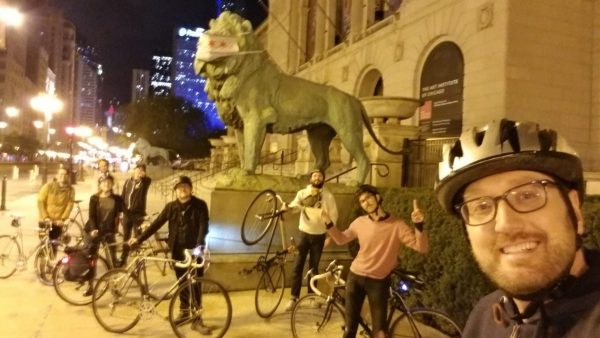 So we did this ride and we talked about it all week, like, “That was so cool, we should do it again!” Other people started wanting to join, so from there we started doing rides up to the Baháʼí Temple [in Wilmette, IL], we rode out to Oak Park. At one point, I think on the third or fourth ride, we rode on Lower Wacker Drive — when could you imagine a time that you could ride your bicycle on Lower Wacker? We rode all the way down to the University of Chicago, we rode to the Aquarium. What wound up happening was, at any given moment there’d be a group of anywhere from four to 18 people, and we rode every Friday for the entirety of the summer. We had our last ride maybe a week or so before Thanksgiving. 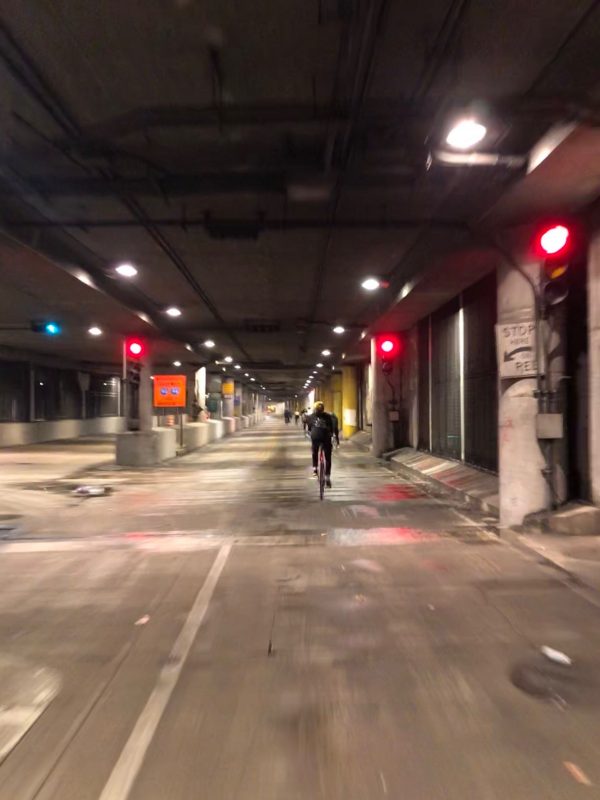 My birthday is in September, so as a gift to the group I’d made t-shirts for everybody. The group was called the “Midnight Merauders”, named after A Tribe Called Quest, and at that point we had all these inside jokes, so those were all on these long-sleeve t-shirts. Anyone who had done at least one ride got a t-shirt. 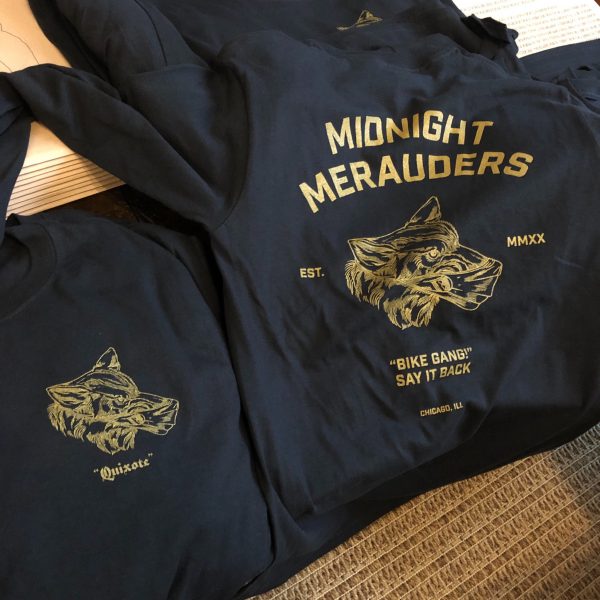 The Friday before Biden won the election, there was a huge tension in the city like something could erupt at any moment. So we were riding the night before they announced the election as this group of 16 people in these matching long-sleeve black t-shirts, and police were following us everywhere. They thought we were trying to start a riot or something when really all we were doing was riding to go get sandwiches. A police officer pulled up next to my friend Clare and said, “So what is this?” And Clare said, “Um, we’re a group of friends that like to ride our bicycles together.”

Once we did a ride to see all the John Hughes houses just north of the city — it’s a nice 35 mile ride each way. We did Home Alone, Planes, Trains, and Automobiles, Sixteen Candles, and Uncle Buck, and officers followed us all through these neighborhoods. For a while, we were feeling kind of scared, like when you’re a teenager and you’re kind of being bad. But then we were like, “Wait — we’re, like, 35. We’re, like, grown adults with careers who just like hanging out late at night.” 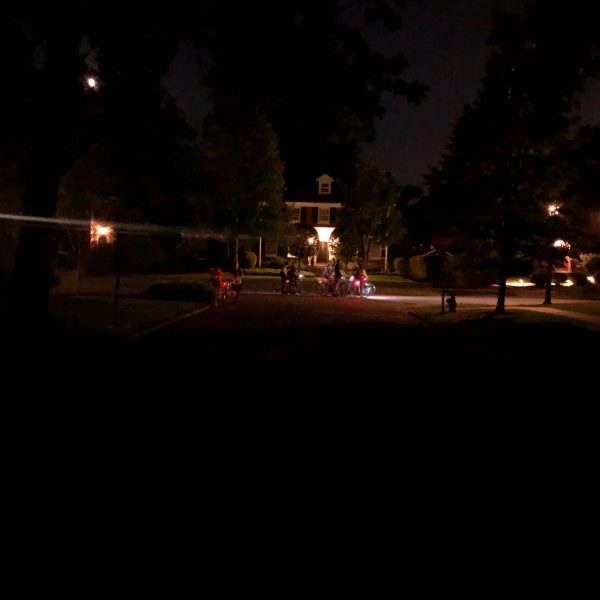 But there were a lot of moments throughout the summer that made us feel like kids again. I’ve lived here for about 15 years, and it was the most connected to Chicago that I’d ever felt, and maybe the most fun summer I’ve ever had living in the city here. If it was a normal year, we would have just gone to the bar every Friday. We would have just gone to the same shows and the same house parties — and those are awesome times, don’t get me wrong. I miss those things deeply. But we had to get creative this year, and it really gave us a summer that I think all of us will remember forever. I can look back on this summer in Chicago fondly instead of with terror, because of this shared experience with this group of people.

Below is the official Midnight Merauders biking playlist — it’s encouraged to put it on shuffle and hit play.

Into It. Over It.’s Figure is out now.

Best of 2020
biking
Evan Weiss
Into It. Over It.
music other
Revisited: I Guess a 30-Year-Old Beastie Boys Record Is My Best Friend Now?
Best of 2020: Alex Edkins (METZ) Loves Cindy Lee 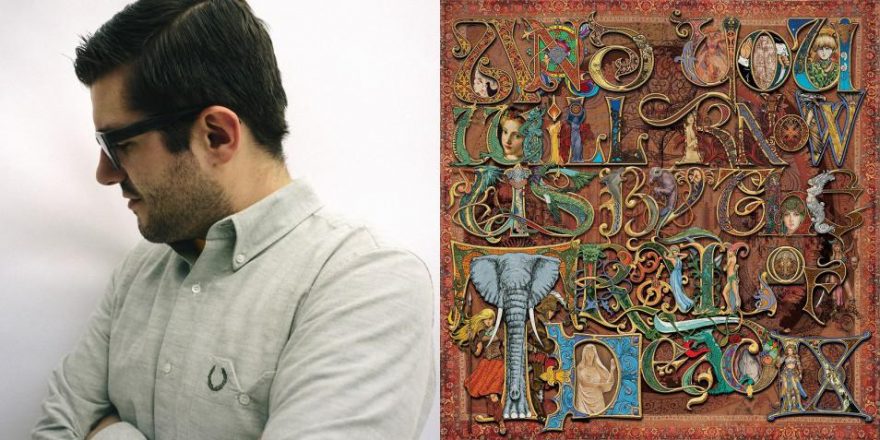 Evan Weiss (Into It. Over It., Pet Symmetry, Their/They’re/There) Talks …And You Will Know Us by the Trail of Dead’s IX