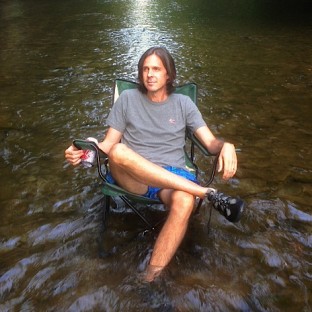 Walter Schreifels is a musician, songwriter, record producer and native New Yorker. He is best known as founding member and main songwriter for New York hardcore legends Gorilla Biscuits, as well as post-hardcore originators Quicksand. He’s produced classic records for Title Fight, Hot Water Music and CIV, among others. After years living in Berlin he currently resides in Williamsburg, Brooklyn, where he is working on multiple projects, including a solo record to be released in early 2015. You can follow him on Twitter here.

RT @xrmbrownx2: omg i hope this is real

Walter Schreifels (born March 10, 1969) is a rock musician and producer from New York City currently living in Berlin. In the late 80s, he played in many New York hardcore bands, most notably Youth Of Today and Gorilla Biscuits (where he also acted as the songwriter). After Gorilla Biscuits broke up, he formed the short lived Moondog. Moondog would transition into the more metal oriented post-hardcore band Quicksand. He also collaborated with his former Gorilla Biscuits bandmates in the pop-punk band CIV. Later, he helped create the melodic indie rock-styled band Rival Schools. Walking Concert, his most recent project, is heavily influenced by classic British such as Elvis Costello, The Kinks, and The Smiths. A new solo acoustic LP is in the pipeline. As a producer, he has worked with such hardcore-related bands as Hot Water Music, and The First Step. Recently, he produced the EP Dear Strutter, the first from UK band Cars As Weapons. He is also part owner of the record label Some Records. Read more on Last.fm. User-contributed text is available under the Creative Commons By-SA License; additional terms may apply.

How is the new White Fence album like the freshly exonerated Central Park Five? A meditation on innocence, psychedelia and what’s wrong with the U.S.