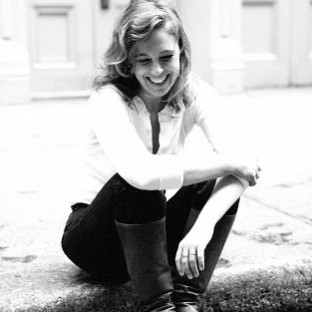 Tift Merritt is a North Carolina native and Grammy-nominated musician who wanted to write short stories until her father taught her guitar chords and Percy Sledge songs. Stitch of the World, her most recent collection, is her sixth studio album. Merritt also has recorded with classical pianist Simone Dinnerstein and sings in Andrew Bird’s old-time band. You can follow her on Twitter here.

RT @UNCPerformArts: Toshi Reagon  is an acclaimed singer, songwriter, and musician AND the next guest on The Spark with Tift Merritt! Regis…

Catherine Tift Merritt (born January 8, 1975, in Houston, Texas, but moved to Raleigh, North Carolina soon after) is a critically acclaimed American singer-songwriter, musician. She is currently based in New York. Merritt's father taught her guitar chords and Percy Sledge songs. She began her professional career in 1998 with her band The Carbines playing small clubs. In her early twenties, though Tift had gigged by herself, she decided she was not very good at music and better suited for writing short stories. She and her dog Lucy started school at UNC to study creative writing. There, she met Zeke Hutchins, whose band had just taken a hiatus and who had decided to become a school teacher. With his encouragement and a big box of LPs from the 70's that they both liked, they started a band. Zeke set drums up in the kitchen of Tift's farmhouse on the outskirts of town, and they practiced songs at her red piano. The Carbines played Chapel Hill haunts like the Cave, the Cat's Cradle, and the front porch of the General Store in Bynum, NC. Tift also made a guest appearance on the Two Dollar Pistols with Tift Merritt EP. In 2000, Tift won Merlefest's Chris Austin Songwriting contest, and with the help of Ryan Adams, found herself with a manager and a recording contract with Lost Highway records. The band headed to LA to record her first release, Bramble Rose, in 2002, produced by Ethan Johns. The record landed on Time Magazine's and New Yorker's top ten lists and was called the best debut of the year in any genre by the Associated Press. Tambourine followed in 2004. Produced by George Drakoulias, featuring Mike Campbell of the Hearbreakers on guitar, Tambourine was a soul-rock throw down, Grammy-nominated for Country Album of the Year, even though it was really not a country album. It was also nominated for three Americana Music Awards. The tour opened for Elvis Costello, recorded Austin City Limits, releasing the performance as a live DVD, and made Home Is Loud, a document of the tour's homecoming concert in Raleigh, NC. As the tour was winding down, Tift ran away to Paris looking for her mojo and, without intending to, started writing songs that would become Another Country. Another Country was released on Fantasy Records in 2008, again with George Drakoulias and her longtime band at the helm. Buckingham Solo, recorded in England, is an intimate concert behind Another Country, released on Fantasy in April 2009. Also in 2009, Tift had her first art exhibit, Other Countries, bringing the journals and pictures behind Another Country to light. Tift also produces The Spark for KRTS Marfa, Texas Public Radio. The Spark explores the real lives and processes of the people behind great works of art. Guests have included writer Nick Hornby, artist Kiki Smith, songstress and Merge co-founder Mac MCCaughan. Emmylou Harris, when asked about Tift, said, “I first heard Tift Merritt some years ago during a writer's night at a small club in Nashville. She stood out like a diamond in a coal patch, and everyone there knew she carried a promise of great things to come.” In 2009, Tift married longtime collaborator Zeke Hutchins. They lived in a small Greenwich Village apartment in NYC, and later divorced. Traveling Alone, her fifth studio album, was recorded in Brooklyn and featuring guest spots from Marc Ribot, Andrew Bird, and others, was released in the fall of 2012. Her sixth studio Stitch of the World was released in 2017. According to the review in Pop Matters, "The stories surrounding Stitch of the World, Tift Merritt's most recent album, make up their narrative, with divorce, relocation, and childbirth at the center of the tale... But Merritt's gift for the record has been to write a series of songs that sound personal without relying on anything autobiographical... the songs are individual, a capturing of Merritt's vision that's unguarded and inviting without being limited." http://www.tiftmerritt.com/ Read more on Last.fm. User-contributed text is available under the Creative Commons By-SA License; additional terms may apply.

The singer-songwriter grapples with her two most important roles.
I should first begin by admitting that Doug Paisley's 2010 album Constant Companion has been my constant companion. I've heard people talk...