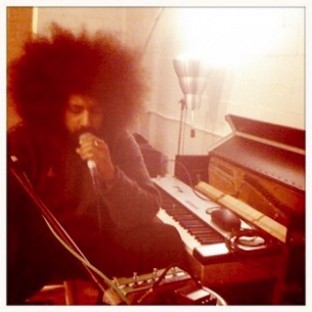 Reggie Watts is an internationally renowned vocalist/beatboxer/musician/
comedian/improviser. A wildly popular live performer, Reggie will headline New York’s Town Hall on June 18.  He returns as one-man bandleader/musical cohort on season 3 of IFC’s Comedy Bang! Bang! premiering May 8, and his popular Reggie Makes Music series has paired him with Aziz Ansari, Andy Samberg and Elizabeth Banks for impromptu music videos. Reggie is a founder of JASH.com  with Michael Cera, Sarah Silverman and Tim & Eric. Many of his videos have gone viral.

RT @MotorTrend: Musician and comedian @reggiewatts is also a car guy, and @Porsche put him (and us) in the passenger seat of its electric r…

Reggie Watts (born March 23, 1972) is a Brooklyn, New York-based comedian and musician. His shows are mostly improvised and consist of stream of consciousness stand-up in various shifting personae, mixed with loop pedal-based a cappella compositions. He performs regularly on television, radio, and in live theater. His comic skills come into play in improvisational performance, as well as performance of written music. Watts' genesis as a solo performer started to emerge at the beginning of 2002. While touring years earlier with the Wayne Horvitz 4+1 Ensemble, Watts was forced to downsize his effects pedal from a Roland Space Echo tape delay to a Line 6 DL4 delay modeler, a smaller device that makes it easy to travel. He began using the Line 6 in live shows with Maktub, in order to replicate the duplicate harmonies from the recorded material. Then he experimented with improvising entire songs in solo acts with the Line 6, playing initial gigs at small Seattle venues and artist bungalows. Inspired by The State and Wet Hot American Summer, he began infusing spontaneous comedic material with the beat box-driven musical compositions. Wanting to concentrate on solo comedic performance, Watts moved to the Lower East Side, New York City, in 2004. He shot comedic web shorts for Superdeluxe, Vimeo and CollegeHumor, where his video "What About Blowjobs?" became a viral hit. He also formed a theatrical collaboration with playwright Tommy Smith, and began developing web philosophy/content with online entrepreneur Jakob Lodwick, with whom he recorded the EP Pot Cookies. Moving to Williamsburg, Brooklyn in 2006, Watts started to branch out into performing for television and film, while continuing to pursue live performance and the creation of new performance technologies. Read more on Last.fm. User-contributed text is available under the Creative Commons By-SA License; additional terms may apply.

Hot off the release of Deftones’ new LP Ohms, frontman Chino Moreno sat down for a chat with his old friend and tourmate, Reggie Watts.
I'm not a huge lyrics person — I hear the music first. But sometimes tuning in to the words can clarify things. And when I checked out the lyric...
I talk about death in my comedy because it is something real, but also something that we don't necessarily like to talk about. That's why death...