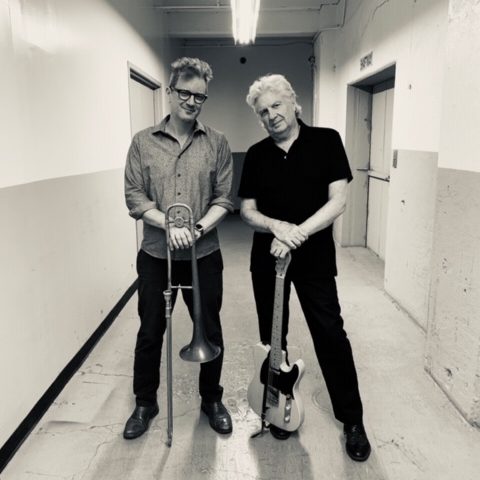 J. Walter Hawkes and Pat Irwin are friends, neighbors, composers for movies, television, and cartoons, and are both long time residents of Long Island City, Queens, New York. Hawkes (trombone, keyboards), is a four time Emmy Award winner and has contributed music to, among others, Peg + Cat, Wonder Pets, and Blues Clues. He’s a fixture on the NYC live music scene and has performed with, among others, Norah Jones, Elvis Costello, Madeleine Peyroux, and Taylor Mac. Irwin (guitar, keyboards, has composed the music for, among others, Nurse Jackie, Bored To Death, Rocko’s Modern Life, and SpongeBob SquarePants. He was founding member of the Raybeats and 8 Eyed Spy and performed with the B-52s for 18 years. He also is currently with a band called SUSS.  Both Irwin and Hawkes have a broad range of musical influences including contemporary classical music, jazz, and obscure rock & roll, and they share an obsession with vintage electronics and 8-bit computer music technology. They work these sounds and more in to their debut collaboration, Wide Open Sky. The record was made in both their studios in Long Island City and is an open letter to the neighborhood and a response to the over development and a reflection on the disappearing wide open sky.

An album premiere, plus an introduction to it written by Cynthia Sley of the Bush Tetras.