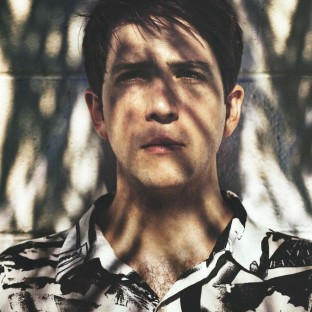 Owen Pallett is a composer, violinist, vocalist, and arranger who has worked with the National, Taylor Swift, R.E.M., Franz Ferdinand, Beirut, Brian Eno, Arcade Fire and many more.  Owen’s violin-looping live project spawned several records under the moniker Final Fantasy, including the Polaris Prize-winning He Poos Clouds.  He currently makes records under his own name, including 2010’s Heartland, and In Conflict  which will be released by Domino Recording Company and Secret City Records on May 27th, 2014.

@perfumegenius Omg, when you and Robbie changed clothes

Owen Pallett (born Michael James Owen Pallett-Plowright, on September 7, 1979) is a violinist and singer from Toronto, Ontario, Canada, and winner of the inaugural Polaris Music Prize. On December 18th, 2009, Pallett announced that he would be retiring his old artist name, Final Fantasy, and would be henceforth releasing his material under his own name. Previous albums released under the Final Fantasy name are planned to be re-packaged and re-released under the new name of Owen Pallett. Pallett has been noted for his live performances, wherein he plays the violin into a sampler controlled by foot pedals, which then loops back one or more of the previously played musical phrases as he plays additional parts simultaneously. He has also performed with more traditional string quartets as backing musicians. He believes his work is somewhat influenced by his sexuality, saying "As far as whether the music I make is gay or queer, yeah, it comes from the fact that I'm gay, but that doesn't mean I'm making music about it." in a recent interview. "I'm taking a cue from Joel Gibb," he begins. "He and I are very different people, and we're very different in terms of the way we've assessed our sexual identities, but one thing I really respect about him is that his music has less to do with his identity and more to do with the more interesting aspects of himself." He states in an earlier interview in Toronto's NOW Magazine concerning his sexual identity and its use in his music. On 12 February 2005, his debut album, Final Fantasy Has A Good Home, was released by the recording club Blocks (sometimes referred to as 'BlocksBlocksBlocks'), a cooperative, Toronto-based record label of which he is a member. A second album is entitled "He Poos Clouds", and inspiration for the songs are based on the eight schools of magic used for Dungeons & Dragons and how they relate to modern times. It is released under Tomlab. His previous projects included a 3-piece Toronto-based band, Les Mouches, now defunct. He is still a member of another Toronto band called Picastro. Owen has also recorded and toured with The Hidden Cameras and Arcade Fire. One of his songs, "This Is the Dream of Win & Regine", was inspired by the principal members of the latter group, Win Butler and Régine Chassagne, and a Dntel song of a similar name ((This is) The Dream of Evan & Chan). Owen also co-wrote the orchestral arrangements for both of Arcade Fire's albums, along with Régine Chassagne. Read more on Last.fm. User-contributed text is available under the Creative Commons By-SA License; additional terms may apply.

Being a teenage Tori Amos fan in the ‘90s was, of course, the greatest. A strong — the strongest ever! — run of albums with no fan consensus on a...