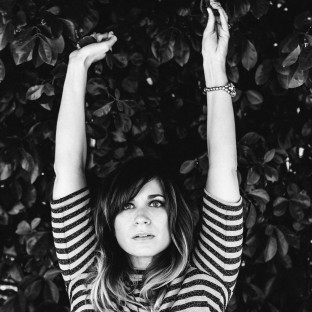 Nicole Atkins (born October 1, 1978) is an American singer-songwriter born in Neptune, NJ. She has released 4 studio albums, "Neptune City" (2007), "Mondo Amore" (2011), "Slow Phaser" (2014), and "Goodnight Rhonda Lee" (2017). Nicole Atkins' music is a blend of the decades and an expression of the images that many of us share in our memories. Both playful and tragic and never cynical. Nicole draws upon the documents left us by heroes such as Roy Orbison, Phil Spector, Nina Simone, The Kinks, David Lynch, as much as her own experiences learning from the new heroes like Stephen Malkmus, Wilco, Lucinda Williams. She grew up in Shark River Hills, a middle class enclave within Neptune overlooking the Shark River. Atkins has cited the river (technically a bay) as a major inspiration for her music, particularly the imagery of “the river in the rain” found in the title track on her album Neptune City. She started playing piano when she was 9 and taught herself to play guitar at 13. She eschewed more popular acts of the day for musical groups her parents listened to, such as The Ronettes and Johnny Cash. She has cited The Sundays’ Harriet Wheeler as a major early influence. She started playing in pick-up bands and doing gigs at local coffeehouses while attending St. Rose High School in the nearby town of Belmar. After high school, Atkins moved to Charlotte, North Carolina to study illustration at the University of North Carolina at Charlotte.She ingrained herself within the city’s independent music scene, discovering bands like Superchunk and Uncle Tupelo. She also started writing original songs and befriending other local musicians. Among other bands, she joined a supergroup in the city called Nitehawk that, at one point, had almost 30 members. She also joined the band Los Parasols, releasing an EP with them entitled The Summer of Love in 2002. That same year, Atkins moved to the neighborhood of Bensonhurst in Brooklyn, New York. She began performing at open mic night at the Sidewalk Café in Manhattan’s East Village. Influenced by the artists on Rainbow Quartz, the independent record label specializing in guitar heavy pop music and traditional songwriting for which she worked, she would move away from the louder rock music she’d played in North Carolina and toward the songcraft style of Wilco and Roy Orbison. She returned briefly to Charlotte, living in a wood shop and playing with several bands, including a group called Virginia Reel. At this time, she started writing what she termed “a mix of Americana, 60s, and indie rock.” She also recorded Bleeding Diamonds EP during her time there. She moved back to her parents’ house in New Jersey in 2004, working odd jobs and playing local gigs. During this time, she commuted into New York by train to play gigs and maintain a connection to the city’s underground music scene. In mid-2004, Atkins and David Muller, who had played drums with Fischerspooner and The Fiery Furnaces, started working on a demo CD entitled Party’s Over. They recorded most of the album in Atkins’ parents’ house using a Casio keyboard, a ProTools rig, and a mini recorder. Drum parts were recorded at Muller’s apartment in Manhattan, with further tracks recorded at the Dietch Projects gallery in Brooklyn. In early 2005, keyboardist Dan Chen, whom Atkins knew from her days at The Sidewalk Café, approached Atkins about forming a new group. Chen told Atkins he knew of a drummer, Dan Mintzer, who might also be interested in playing with her. When the three sat down together for the first time, Chen and Mintzer already knew how to play the songs they’d heard on Atkins' MySpace page. Eventually David Hollinghurst, another friend from The Sidewalk Café, joined the band on guitar and Derek Layes was brought on as bassist. The band, now known as Nicole Atkins & The Sea, was given a residency at the small showcase bar, Piano's, and won the attention of music industry attorney Gillian Bar. Atkins' Party’s Over demo had stirred interest from heavy metal label Roadrunner Records, among others. She soon found herself in the midst of a bidding war between record labels and signed with Columbia Records in January 2006. In late 2006, Atkins and the Sea traveled to Sweden to record her debut album, Neptune City, at Varispeed Studios in Kalgerup and Gula Studion in Malmö with producer Tore Johansson. The album was originally scheduled for a July 2007 release, but at the behest of Columbia co-chairman Rick Rubin, it was pushed back until October 30, 2007 to accommodate re-mastering the album. It debuted at number 20 on Billboard’s Top Heatseekers chart. In May 2009, The Sea disbanded and Atkins started collaborating on several new tracks with drummer Christopher Donofrio, bassist Anthony Chick, and guitarist Bradley York (of "Sikamor Rooney"). Atkins tentatively titled this lineup "The Black Sea". By July 2009, Atkins had ended her professional relationship with Columbia Records. In January 2010, Atkins and The Black Sea started recording new material at Brooklyn's Seaside Lounge studio with producer Phil Palazzolo, with whom Atkins had previously worked during sessions for A.C. Newman's second solo album, "Get Guilty". Several other musicians joined Atkins in the studio to record the tracks for what would become her second album, Mondo Amore, including guitarist Irina Yalkowsky and bassist Jeremy Kay. Along with drummer Ezra Oklan, Yalkowsky and Kay would form the core lineup of the The Black Sea with whom Atkins would tour in support of Mondo Amore. In June 2010, Atkins signed with New York-based independent label Razor & Tie. The label released Mondo Amore on February 8, 2011. Read more on Last.fm. User-contributed text is available under the Creative Commons By-SA License; additional terms may apply.

The prolific psych-rocker's new album is all wicked come-ons, guitars in street fights and depraved children wanting more. It is full-on Zen hedonism.
From Led Zeppelin to R.E.M. to Broncho, a good song of the summer evokes both a sense of anticipation and a nostalgia for the recent past.
With its wit and melancholy, Speedy Ortiz’s new album is the sound of a woman stomping the sad feelings and then wearing them like a badge of honor.