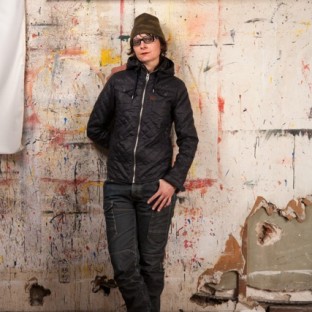 We Fall, Josephine Wiggs‘ third album was released digitally and on vinyl on May 17, 2019 by Sound of Sinners.

Wiggs grew up in an unconventional family north of London. Returning home from a summer holiday with a donkey riding in the back of the family’s 1927 Rolls Royce was not considered at all bizarre. Wiggs studied cello as a child, segued from college in London to undertake a master’s degree in Philosophy, and then in a move few would have predicted joined a rock band.

After making three albums with The Perfect Disaster (1987-1990), Wiggs left to join Kim Deal (Pixies), Tanya Donelly (Throwing Muses), and Britt Walford (Slint) in forming The Breeders. With the release of Pod (1990) the foursome were instantaneously dubbed an indie supergroup. Following a shift in line-up — with Kelley Deal on guitar and new drummer Jim Macpherson — The Breeders released Last Splash in 1993 with its hit singles “Cannonball” and “Divine Hammer” and became alternative rock superstars.

In 2013, following the 20th anniversary of Last Splash, the classic lineup of The Breeders reunited for a world tour. Five years later in 2018 they released All Nerve, with Wiggs co-writing two songs and singing lead on the standout track “Metagoth.”

This is a great little film. Where Are All the Bob Ross Paintings? We Found Them. https://t.co/Wmf6Yb1MOP

The Breeders bassist on what a "day off" actually means when you're on the road.
In June of 2012, I was in a coffee shop in Brooklyn when Kim Deal texted me, wondering if I’d be interested in getting together with her, Kelley...
At Montreal International Airport, I overhear a ripple of disquiet from some other artists queuing at Immigration who have discovered they are...