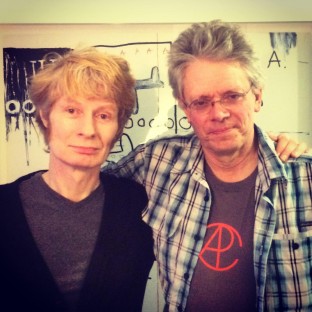 JG Thirlwell is a composer/producer/performer based in Brooklyn, New York. As well as his own name, he works under many pseudonyms, including Manorexia, Foetus, Steroid Maximus, Baby Zizanie, Hydroze Plus, Clint Ruin and Wiseblood. He has released over thirty albums. Thirlwell has also worked with a wide variety of artists, including Karen O, Noveller, Zola Jesus, Melvins, Swans, Nine Inch Nails, Lydia Lunch and many more. JG has completed commissions for Kronos Quartet, Bang On A Can, Experiments in Opera and LEMUR among others, and is a member of the freq_out sound-art collective. He also creates solo sound installations. In 2010, he received a fellowship from the New York Foundation of the Arts in sound/composition. He often performs live with a chamber ensemble version of his Manorexia project. JG also creates the musical score of the Adult Swim/Cartoon Network show The Venture Bros, and has created several motion picture scores. You can find him on Facebook here and his website is here.

David Harrington is the founder and artistic director of the Grammy-winning Kronos Quartet. For 40 years, the Kronos Quartet and its non-profit Kronos Performing Arts Association have re-imagined and redefined the string quartet experience through thousands of concerts, more than 50 recordings and 800 commissioned works, and education programs for emerging musicians.

Two visionary musicians, champions of new music, get together for a fascinating talk.