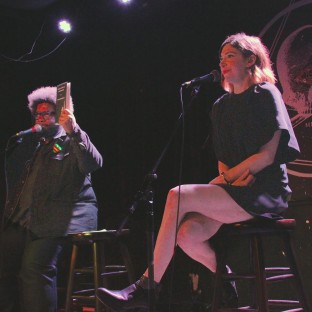 Carrie Brownstein writes and stars in the Emmy-nominated, Peabody- and WGA Award-winning television show Portlandia. Her writing has appeared in the New York Times, Slate, the Believer, Vanity Fair and numerous book anthologies on music and culture. Brownstein was also a member of the band Sleater-Kinney. Her memoir, Hunger Makes Me a Modern Girl, is out now. Follow her on Twitter here.

Drummer, DJ, producer, culinary entrepreneur, New York Times best-selling author and member of the Roots, Questlove is the unmistakable heartbeat of Philadelphia’s most influential hip-hop group. He is the musical director of The Tonight Show Starring Jimmy Fallon, where his beloved Roots crew serves as house band. This four-time Grammy Award-winning musician’s indisputable reputation has landed him musical directing positions with everyone from D’Angelo to Eminem to Jay-Z. His latest endeavors include scoring Chris Rock’s film Top Five, co-executive producing the original Broadway cast recording of Hamilton and writing a new book, somethingtofoodabout, to be published in April 2016. He will also serve as the executive music producer and composer for the A&E miniseries Roots. Follow Questlove on Twitter and Instagram.

Quest and Brownstein reunited for another edition of The Talkhouse Music Podcast
These two noted musician-authors might come from different backgrounds and make different kinds of music, but they have a lot in common.