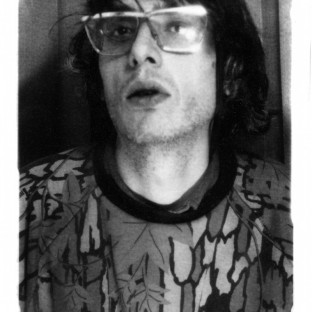 Alexander Moskos is a musician from Canada. He has performed in groups such as AIDS Wolf and under the solo moniker Drainolith. He currently is joined by Neil Hagerty, Charles Ballas and Nate Young in Dan’l Boone. You can check out their self titled debut album, due in late September from Drag City. You can follow him on Twitter here.

Drainolith is Alexander Moskos, best known as first-chair guitar in the formalist rock group AIDS Wolf but also a member of Montreal's forward thinking electronic music scene. Moskos has spent the last decade touring and recording with a number of different outfits often playing modified consumer electronics and analog synthesizers. With Drainolith, Moskos is finally in the realm of song-form, albeit with a polyrhythmic undertow and woozy vocal style. All of Drainolith's material is performed live, with no backing tapes, samplers sequences or arpeggiators. Moskos plays foot triggered drum synths, keyboard or guitar and modified cross-patched disco mixers. Moskos has released material on American Tapes, NNA, Deception Island and Wagon. The new Drainolith 7" You Paid For It b/w Deepwater No Cars is out now on Montreal's own Psychic Handshake and an LP on Spectrum Spools will be ready for release in early 2012. ...sparkly drone ... transporting sound art... - Time Out New York Drainolith is really where it's at. Tout seul he bleeds his voice, guitar, vintage keys and noise boxes into a self-recorded sonic blender and scoops out the muck into muffin trays prepared with dark, ambient, electronic and experimental. 4/5 - Ottawa Xpress It’s a weird little record, and sometimes weirdness is enough. - Still Single / Dusted Drainolith has performed at the POP Montreal, Neon Marshmallow, and Mutek fests. This will be his 2nd US tour in 2011. Read more on Last.fm. User-contributed text is available under the Creative Commons By-SA License; additional terms may apply.

Don’t let 5 Seconds of Summer give you the wrong idea, Australia has given the world plenty of great art. Just not this album.