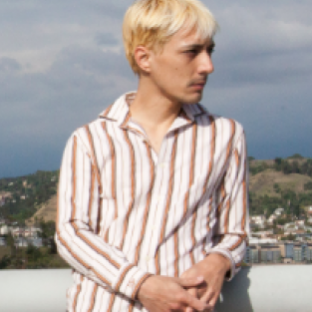 Aaron Hemphill performs and records music with the band Liars. Born and raised in Los Angeles, he moved to New York after meeting fellow bandmate Angus Andrews, and lived there for about five years. He now lives in Berlin.

Liars is an experimental electro/rock band formed in 2000. Australian-born Angus Andrew is the founding and only constant member with Aaron Hemphill (percussion, guitar, synth) leaving the project in 2017 and Julian Gross (drums) no longer is able to perform due to personal reasons. The band has released 8 studio albums since forming and remains one of the few bands still consistently active from the post-punk revival scene in New York of 2000s. Although initially lumped into the New York dance-punk scene of the early 21st century, they have come to be categorized by their dramatic stylistic shifts between albums, while retaining a consistent interest in rhythm and sound texture. Liars are one of the many contemporary bands to draw from the late 1970's British post-punk movement. Their first album, 2002's They Threw Us All in a Trench and Stuck a Monument on Top, bore some resemblance to the work of Delta 5 and Gang of Four, accenting their angular, acerbic punk with modern synths and drum machines. Liar's second album, 2004's They Were Wrong, So We Drowned, eschewed their debut's trendy post-punk aesthetic in favor of dissonant atmospherics and electronic soundscapes more akin to the sound of This Heat. That album stratified fans and critics alike, especially chafing with those who took to They Threw Us All for the clear dance/punk leanings of a number of that album's tracks (e.g. "We Live Northeast of Compton"). 2006 saw the release of Drum's Not Dead., which continued the direction they had taken with They Were Wrong but was met with a much more favorable critical reaction. 2007's self-tited LP, Liars, found the band once again shifting styles, this time towards 60's style garage rock and 70's proto-punk, all through the dark, effects-driven prism that Liars began channeling on They Were Wrong. While more straight-forward than their previous 2 LPs, the record contained the same focus on rhythm and experimentation with the deconstruction of traditional sounds. Similar to Drum's Not Dead, Liars was critically praised and found its way on to Best of 2007 lists. They released, Sisterworld, in 2010, which continued in their experimental post-punk direction. Its deluxe edition came with a completely remixed version of the album, with tracks being remixed by artists such as Thom Yorke, Kazu Makino of Blonde Redhead and Carter Tutti. In 2012, they released WIXIW, which saw the band take an almost entirely electronic direction with their music. Their seventh album, Mess, is currently slated to be released in March 2014. Official website: http://www.liarsliarsliars.com/ Myspace page: http://www.myspace.com/liarsliarsliars Read more on Last.fm. User-contributed text is available under the Creative Commons By-SA License; additional terms may apply.

On this collaborative album, the jazz trio BadBadNotGood don't overwhelm Ghostface Killah, they make him sound more like himself.
The Legendary Pink Dots' 2010 album Seconds Late for the Brighton Line was the first album I ever pre-ordered online. The package...