A lot has been said about Corin Tucker’s voice. Everyone will tell you how big, powerful and strong it is — and it is. I can’t really think of a close equivalent, which is really rare — when you listen to voices, there’s always a soundalike. I’m floundering when looking for Tucker’s soundalike, but if pushed, I guess I would mention Patti Smith. But Corin’s voice is almost more of an instrument than a voice — maybe brass. Strong notes come out but not always clearly articulated as actual words, so you pick up the lyrics slowly, after a few listens, and maybe you don’t have them right but it doesn’t matter.

Women have traditionally been encouraged to sing in certain ways — sweetly or, these days, with the dynamic range that showcases contrast. Women are expected to sing with a degree of dynamic range, loud and strong and raw, which then must be followed by something softer and more delicate. But Corin just hits a level of intensity from the first word and stays there — her voice operates as another instrument in the song, just like the guitars. This is a deliberate choice, in keeping with the subject matter of the songs, and yet it’s also attention-grabbing.

You don’t need to hear the meaning of every word because you already have a certain amount of context, artwork, interviews and the fact that they are women. And if you think it doesn’t matter if they are women or not, then you don’t understand what a profoundly sexist world we live in today. They are a rock band composed of women, women who are not in a state of partial undress — just that in itself goes some way to making it a politically radical project.

At the heart of a Sleater-Kinney song there is a proposition, a polemic. It is a stand both for feminism and against the inherent anti-feminist bias of mainstream society. One of the ways they communicate this, beyond the content of their lyrics, is by being direct, unambiguous, brave and self-confident.

The new album opens with the song “Price Tag.” My first thought as the song starts is that it could so easily have been a Gang of Four song title. This is a discussion about our lives and other people’s everyday realities and the role economic factors play in everything. Not for the first time I feel Sleater-Kinney and Gang of Four have quite a lot in common. We obviously share similar agendas, though the way they put the lyrics together is very different.

Whack. The snare is powerful. The kick drum is fat but tight, the toms boom. This is a big, muscular sound.

There is a great confidence to what they are doing, They sound completely committed; there is nothing tenuous here. They inhabit the song.

I’m not convinced by the first and second verses; these feel a bit frantic and over-busy but it all comes together with the chorus, which is powerful and simple and very hooky. It completely gets into your head, with a guitar riff that’s simple, strong and insistent. Then the second half of the song builds on that chorus into an epic finale.

All through the record the guitars are the main deal, sometimes playing together, or answering each other in a call and response. They are more minimal in the verses and blast it out in the choruses. When I think of St. Vincent, one of the identifying characteristics is the squiggly guitar lines, little five- or six- or nine-note bits of a scale, but rearranged somewhat, stretched over maybe roughly half a bar, or a bar, or a bar and a half, and then repeated. Sleater-Kinney do the same thing and I can’t really think of any other bands who do this. In St. Vincent’s case it often sounds like a bit of a brass section line. I wonder if St. Vincent was inspired by Sleater-Kinney.

“No Anthems” is my new favourite song and has gone straight to the top of my current jukebox. It starts with a punk drumbeat and then two guitars come in playing the same line, repeated, but one is slightly behind the other. It’s mid-tempo, but the kick drum is playing eighth notes, so it all moves along. Then the verse kicks in and one of the guitars goes down the octave so it becomes a massively distorted bass (I thought it was a distorted bass synth when I first heard it). It’s a fat and beautiful sound. There is a very satisfying amount of space: a vocal line alternates with a guitar riff. When it gets to the chorus the compression and short reverb on the snare come right up in the mix and the guitars start playing chords — it’s huge, but it’s over quickly and drops back down to the spare verse before you have time to get too used to it. The whole thing has a smoky, underground vibe, crackling and buzzing with electricity and a kind of primeval sexuality. She sounds like she’s coaxing, not pleading. What’s she after? Or is she boasting? She’s up to something. What’s she saying? I can’t tell. I listen a few more times and make out a few sentences:

“I’m the whisper, I could do it better/I’m desire itself /There is no roadblock that I couldn’t unlock/I really get around/Seduction, pure function.”

And this line, which is funny, playful, ambivalent: “I’m the pool boy filling you with cool joy.”

I find myself thinking about different versions of feminist rock, and actually wondering if there really is such a thing. I remember conversations in the early ’80s with my friends in the Raincoats, the wonderful all-women indie band who began in the late ’70s. They said they liked Gang of Four but sometimes told me, in an ever so slightly pious way, that we were just a bit “too male.” I knew exactly what they meant. Gang of Four incorporated a certain degree of heaviness, were tight, locked to the groove, and often a little threatening in a theatrical yet also a real way. The Raincoats rejected that “maleness” by being deliberately loose, often to the point where the whole thing felt like it might collapse, and having arrangements built around violin phrases, which brought a kind of anti-rock folkiness to proceedings. Sleater-Kinney has decided not to be bothered about that but I can imagine that subject came up in rehearsal room conversations. They don’t mind occupying the same landscape as so many male bands; they just don’t feel that a loud, pounding drum groove and distorted, heavy guitar riffs should be the sole preserve of a sexually unambivalent, white-male-dominant culture. 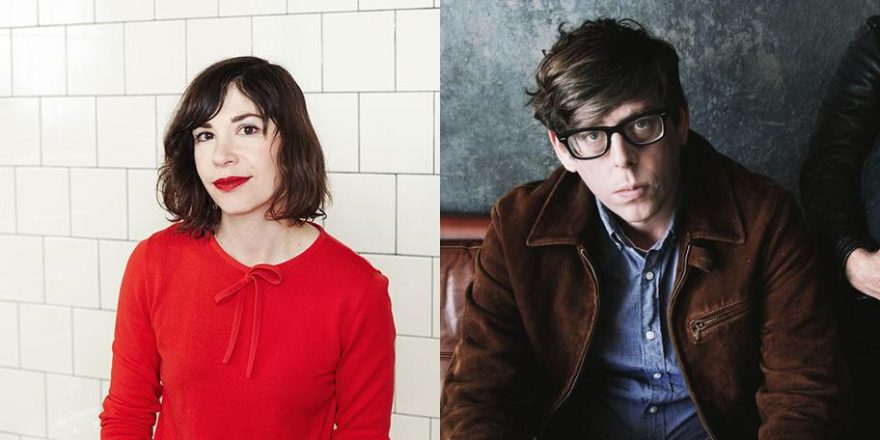