The Byrds: 1964-1967 is a new 400-page art book, featuring images curated by the surviving members of the band — Roger McGuinn, David Crosby, and Chris Hillman — and their running commentary throughout. Below is an excerpt with images from the band’s early days, including a photo shoot from when they were known as The Jet Set, their first TV appearance, and more. The book will be published by BMG on September 20, but is available for pre-order now.
— Annie Fell, Editor-in-chief, Talkhouse Music

The group that eventually became The Byrds started as a trio when Roger McGuinn, Gene Clark, and David Crosby joined forces at The Troubadour, a popular folk club on Santa Monica Boulevard in West Hollywood, California, in 1964. They were initially known as The Jet Set. 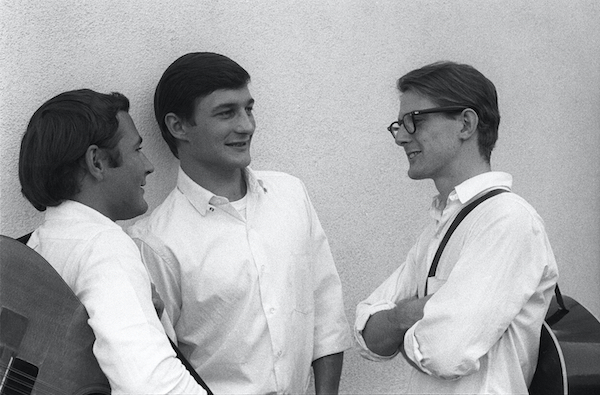 Roger: This is The Jet Set, prior to The Byrds. I was doing a solo gig at the Troubadour, and Gene came backstage and said, “Hey, I get what you’re doing.” I was doing a mix of folk and rock, and he’d just come out of The New Christy Minstrels. He said, “Let’s write some songs and see what happens.” So, we started writing songs.

David: I walked into the front room of the Troubadour, the bar, and they were sitting there. Gene and Roger were already together, so they were the earliest Byrds. They were doing Beatles songs, so I sat down and started singing harmony. That was the beginning. Then I heard Gene’s songs. He was the first one of us who was writing. Roger never did really turn into anywhere near as much of a writer as Gene, but Roger knew they were good songs. Roger was playing better than anybody else, so he made Gene’s songs sound really great.

Roger: David said, “If I can be in your band, I know this guy Jim Dickson, who has a recording studio we can use for free.” I said, “That’s cool,” and we became a trio.

David: This was relatively soon—within a month or two—after met. This is photosession that our “manager” set up for us. That was Jim Dickson. What an asshole.

Chris: The three of these guys look like they just came out of a college coffee house doing a folk set but, good-looking guys. David Crosby—Look at him, he looks great. Gene and Roger—Roger looks like he’s an academic.

It was while performing solo that David Crosby caught the attention of Jim Dickson, a would-be manager and record producer, who helmed projects for Elektra Records and the World Pacific label.

David: Jim Dickson was a guy that I knew. I’m not sure how. When we started doing this, I thought we needed to have somebody to help us do it. He had been talking to me and trying to help me. He got me a session with this jazz guy, Bud Shank. He was the only guy I knew who knew anything about show business. I didn’t know at the time what an absolute shit he was.

On May 5, 1965, The Byrds flew to New York City for a short two-day trip to film an appearance on Hullabaloo. It was their first nationally-televised appearance… This was the period when McGuinn debuted a new look with his now-iconic glasses. 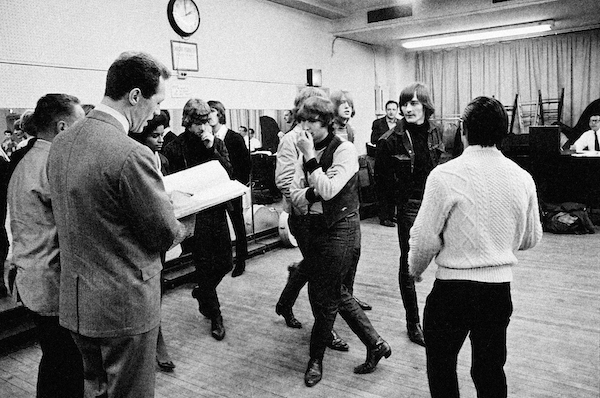 Roger: They had us come in to do camera blocking for the Hullabaloo shoot. We all thought those shows were really silly. They weren’t live; they were lip-synched. Sometimes they wouldn’t even have a microphone or a guitar cord. It was very artificial.

David: We don’t look like we’re having a great time. Actually, we weren’t!

Chris: When we were set to guest on Hullabaloo David had on this big Navy peacoat. Dickson said, “Don’t wear that peacoat on camera. It’s going to make you look really big. Don’t do it.” But David said, “Don’t tell me what to wear. I’ll wear what I want.” So, after we taped the show, it aired and David said, “God,I look like a fat pig. Why did you let me wear that?” Dickson said, “Really?”

David: We didn’t think intelligently about stage presentation in a coherent way, but we wanted to get noticed. That’s why Roger wore those silly glasses and I wore the cape later on. We did want to get noticed, but we didn’t have a plan. Nobody had a plan. We were just out there trying to be fun. We were trying to have a lot of fun. 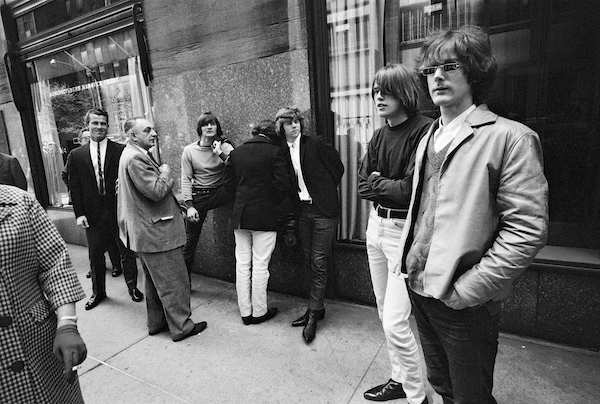 David: I don’t know why my head’s against the wall. Tired of bullshit maybe?

Chris: That’s the Hotel Earle where we stayed. It was in the West Village and really sort of a fleabag. In those early days of limited funds, Crosby would always book what was called a suite at the Earle, which was probably $35 a night.

David: The Hotel Earle! I knew it well. It was a fleabag.

Roger: I used to live there when I lived in the Village. John Phillips turned me on to it. He was really good at finding these cheap hotels. It was like three bucks a night, or 20-something a week. I lived there for a long time. He also knew the Padre Hotel where we lived in LA, and it was another one of these really inexpensive places. But it had everything you needed. It wasn’t luxurious, but you had your own bathroom, shower, telephone—everything you could want. I went back to the Earle Hotel some years ago after its name had been changed to the Washington Square Hotel, and they were charging hundreds, or maybe thousands per night. I was paying three bucks a night for room 707 back before The Byrds, so the manager said, “Well, you know, if you want to come back, I’ll give you that rate.” 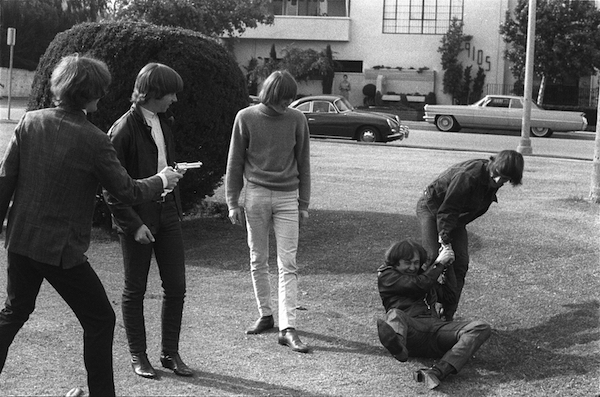 Roger: We liked guns. We were heavily influenced by cowboy movies and James Bond, but this was just a cap gun.

Chris: That’s the little park at Doheny Drive and Santa Monica Boulevard, to the west of The Troubadour, and on the same side of the street.

David: We were definitely tussling! This was a different era, man. When I was in high school I lived on a farm, five acres of avocados and seven acres of lemons. I wanted to learn how to shoot a .22 like everybody else who lived on a farm, so I went to the NRA school in the basement of the high school, and a couple of retired army sergeants down there taught us kids to shoot. It was a different world. People weren’t trying to open carry, and nobody had ever shot up a school. I didn’t have any guns until the Tate-LaBianca murders. That was my record producer [Terry Melcher]’s  house, and it was a quarter of a mile from my house. Ever since that time I have owned guns. Would it be great to have a world where we don’t have any guns? Yes, I would happily live in that world. I would like that a lot. Is that a realistic likelihood? No, obviously not. I do not like the violence in our country, but I come from a different time and a different way. Guns mean a whole different thing to me than they do to these people who are running around acting like nuts. 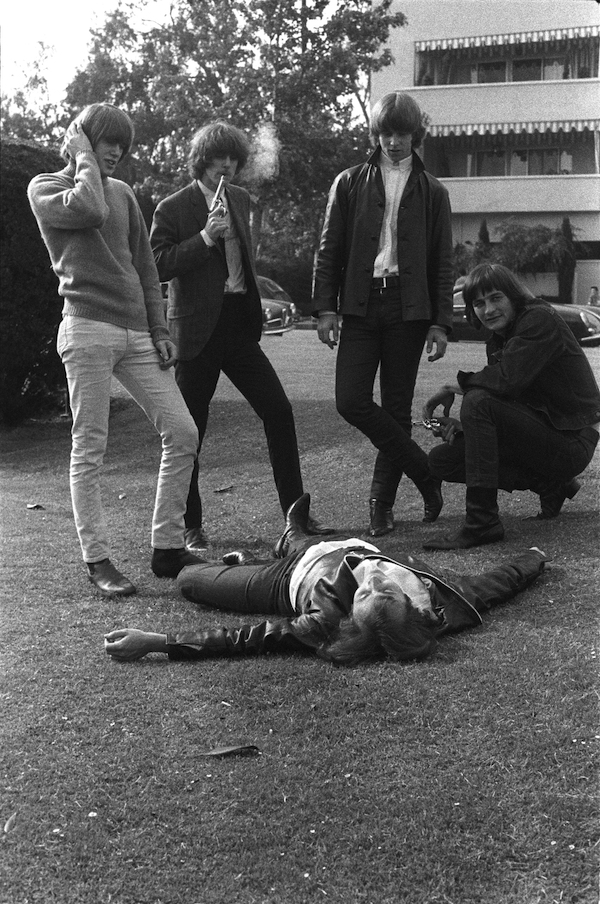 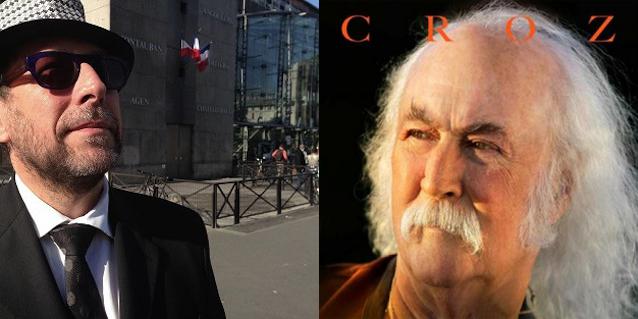 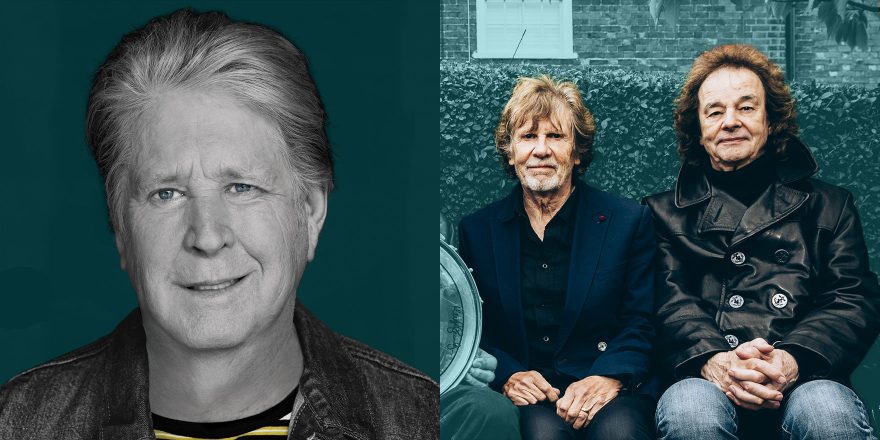