Irmin Schmidt is a keyboardist, composer and founding member of the group Can. He has scored more than forty soundtracks and written an opera, Gormenghast, based on the novels by Mervyn Peake. In 2015, he was made a Chevalier of the French Ordre des Arts et des Lettres. He lives in southern France.


All Gates Open: the Story of CAN
book excerpt
Can
Irmin Schmidt
Mark E. Smith
music other
Rob Young
The Fall

All Gates Open explores Can’s history and influence through both a biography of the group (written by Rob Young) and and a symposium conducted by founding member Irmin Schmidt. In this passage, Schmidt and his brilliant musical weirdo compatriot Mark E. Smith chat about how no one will let Smith into any of Manchester’s hip microbreweries. Also—you guessed it—Can!
—Annie Fell, associate editor, Talkhouse

Mark E. Smith: How are you, Irmin?

MES: That’s like a shock. I am finally meeting you. I was told that you wanted to meet me. I thought it was a joke.

IS: Do you remember that you once called me? That was in the seventies.

MES: What are you suggesting here?! I don’t think so.

IS: Maybe you’ll remember when I mention what you proposed: you said that we should do a gig together. That must have been in 1977. Long ago . . .

IS: But it didn’t happen.

MES: I was an insane fan of yours back then. I had just begun and formed a band. I had formed The Fall in 1976. Ah! Here comes the beer!

IS: I like the temperature of the beer in England. In Germany they usually serve it way too cold.

MES: These microbreweries brewing craft beer in the backyards are the biggest-growing business in the country. Four years ago there were only sixty, and now there are over two thousand. They’re popping up like mushrooms. The people who are running these are fucking shit, certainly. In Manchester and Liverpool they wouldn’t let people like me in.

IS: I’m more into wine. But I read in your book that wine isn’t your thing, is it?

MES: I also drink wine – if it has to be. But why are we meeting anyways? What is this interview good for?

IS: We are doing a book.

IS: It’s about Can. Actually, it’s less about Can and more a book about music and being an artist.

MES: So it’s a book floating between Can and music. I like it when it’s floating and when everything suddenly changes.

IS: Did you ever see Can perform?

IS: Do you remember when you first heard of Can?

MES: I recently saw a vinyl re-release of Monster Movie in a record shop in Manchester. It’s hip to buy Can records nowadays.

IS: That was our first album. It was released in 1969. You must have been twelve years old back then. You were born in 1957, weren’t you?

IS: Sure I do! I recently did a collaborative concert with Thurston Moore. In 2017 I will turn eighty years old.

MES: It is an honour to finally know another Smith. A Schmidt-Smith from Germany.

IS: Welcome to the club.

MES: You know what Can’s problem is? Many people just pretend that they like Can. But they don’t. For them it’s just a hipness thing to buy your records. You could have called your band ‘Coffee Table’. Then your records would be considered ‘coffee-table records’. For most of the Britons, Can were consisting of Damo Suzuki and the bass player, Holger Czukay. But I know that Can were Irmin and Jaki. People in Britain and America pretend to know the Can. But what they don’t understand is Irmin. And the problem with the Germans is that they are like fucking English people. They pretend to know you, but they don’t have a clue. The Germans never do appreciate what’s on their own doorstep.

IS: That’s why I’m living in France.

MES: I bet you did this one right.

MES: I heard it then.

IS: You heard it on the radio?

MES: No, I ordered it by post. It was called mail order. The first record I bought was Tago Mago. When I was fifteen, I was a hard-core Velvet Underground fan. And other friends of mine who were also listening to the Velvet Underground told me that I should listen to Can. So I filled out a postcard, and two weeks later I got back a Can record – from London.

IS: And did Tago Mago live up to your expectations?

MES: Fucking yes. It formed my skills listening to it. I went to grammar school at that time and everybody was listening to Pink fucking Floyd and the Beatles. They were shit. But Can were great. As was Gary Glitter. And the Velvet Underground. Manchester peo-ple always liked Can. That’s why we are called ‘The Can People’ since 1973. To earn some money I was working on the docks. All music during that period was fucking shite – David Bowie, Genesis, Pink Floyd and James Taylor. Crap. Can saved my life. Irmin, you fucking saved my life! And because you saved my life I even bought Soon Over Babaluma.

IS: I actually still quite like Soon Over Babaluma. At least to me, that was the last of the good Can records. After that we somehow lost the focus, I’d say. But that happens to a lot of bands.

MES: We could have had this conversation in 1977.

IS: I listened to The Fall’s records during the eighties. But I never saw you live.

MES: You are joking. This is a cruel joke.

IS: But it was me who wanted to meet you. Don’t you remember?

MES: I should play the south of France more often then.

IS: And we played Manchester quite a few times.

IS: We’d never have allowed only students at our gigs.

MES: Didn’t you get it? That was a joke, Irmin.

IS: We played for everybody.

MES: Fuck the seventies. I don’t want to go back in time. Never ever, ever. But I would like to have a jukebox in this micro-draught-beer brewery to spin a Can record. In Manchester there is a bar with a jukebox that has tracks by Can in it. I always go there. I always spin ‘Yoo Doo Right’. Once I even played it twice.

IS: You know, I recently read your book again, Renegade.

MES: Oh, that was written a long time ago.

IS: I loved the story about how you kicked out your band in America.

MES: I have a new band now. Not like you.

IS: I would probably come to see a show if you were playing Marseille.

MES: I won’t go there. The French hate The Fall.

IS: I don’t think so. The French actually love music like The Fall are doing.

MES: But we played Marseille. And they fucking hated us.

IS: Can were never well received in Marseille either.

MES: We played there three years ago and it was a disaster.

IS: We played there twice in the early seventies and stopped playing there thereafter for the same reasons. But in other French cities we’d always have a great time. In Bordeaux they even opened a club and called it Tago Mago.

MES: It’s funny because we have a promoter in Paris. But he books us in cities like Nantes. I had to look at the map to find out where this city was supposed to be. You know, I’m English. It’s in the blood. I have a hate relationship with the French. I’m not a Londoner. I’m a real Englishman. I am allergic to France. Of course, I try to be nice. But they don’t like me and I don’t like them. And let me add that I get along very well with anyone else. The Japanese, the fucking Londoners, even you Germans.

IS: Do you regularly play in Germany?

MES: We often play Berlin. Almost every year we play there. And we’ve been very warmly received in Israel the other day. Before going there I received letters from London not to play there.

MES: Because of the Palestinians.

IS: It’s stupid, because as a musician you play for people – and not to political parties. I would try to play in Palestine and in Israel on the same tour.

MES: I even got blacklisted by the Londoners because I played in Israel. You know what? We should play together in Israel. I might need a new keyboard player by then.

IS: But I don’t play rock music any more.

Irmin Schmidt is a keyboardist, composer and founding member of the group Can. He has scored more than forty soundtracks and written an opera, Gormenghast, based on the novels by Mervyn Peake. In 2015, he was made a Chevalier of the French Ordre des Arts et des Lettres. He lives in southern France. 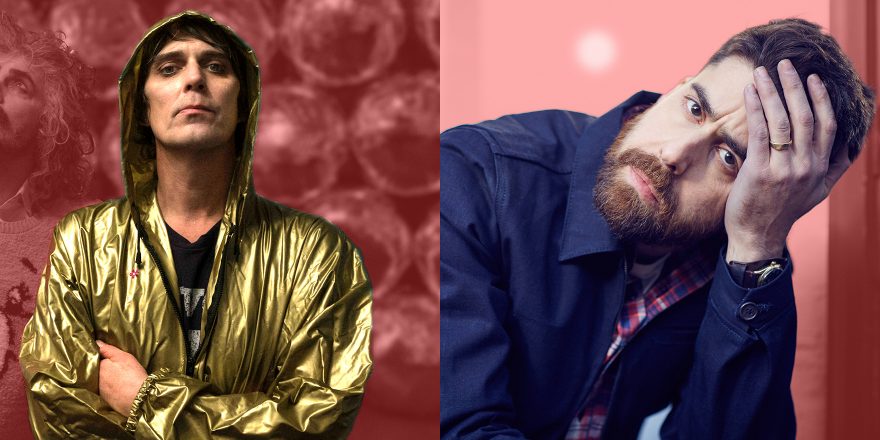