Kiri Oliver is a writer and musician from Brooklyn, NY. She wears bright colors and sings about her feelings in the folk-pop-punk band Early Riser. She was a music booker for The Chris Gethard Show from its public access days through its run on truTV. Follow her on Twitter here.

When I arrived at Wesleyan University in the fall of 2001, the school already had a strong alumni roster of beloved musicians like Santigold, Amanda Palmer, Dar Williams, and Atom & His Package. Since my graduation in 2005, that roster has grown to include Das Racist, Bear Hands, Francis and the Lights, and of course MGMT—my classmates and one of the biggest bands of the mid-aughts.

Because they were not only in my year but also from my dorm, MGMT’s success loomed large for me as a point of comparison for my own progress (or lack thereof) as a musician. But I didn’t know them, or the ins and outs of their work and struggles, so I only had the highlight reel of their rise to stardom as the backdrop for my continued failure to reach my goals: to get a band together, put out an album, and then quit my day job to play music and tour forever without ever worrying about money. (Hey, it seemed doable when I was 19 and knew nothing about the industry. Plus, MGMT did it.)

But over time, I came to appreciate my own winding path as a musician and the positive experiences and relationships I was lucky to have as a result. I also realized, as all artists eventually need to, that comparison with my most successful peers was futile and a recipe for misery—especially considering that their music and goals were completely different from mine. Here’s an abridged timeline of how our parallel stories unfolded:

Ben Goldwasser and Andrew VanWyngarden form The Management in their second semester at Wesleyan.

In January, I manage to flee a nightmare roommate situation and move into the “artsy” dorm WestCo, where Ben and Andrew live. I don’t make an effort to get to know anyone in the dorm. I’ve given up my first-semester dream of starting a ska-punk band on campus, and now focus my efforts on meeting musicians in the local punk scene. Through the message board CTPunx.com, I befriend a redheaded high schooler named Chris who takes me to a Halloween cover show at the Newtown Teen Center and introduces me to a guitarist. I dress as Avril Lavigne and make sure everyone knows it’s ironic.

The Management releases an EP, We (Don’t) Care, and a full-length, Climbing to New Lows, before changing their name to MGMT. Both releases include versions of a very catchy song called “Kids.” They play a series of legendary campus shows that I don’t attend. In April, the Wesleyan Argus features them as the weekly WesCeleb; in a surreal interview, Ben and Andrew joke around and describe themselves as lazy and ripping off other musicians, but it’s also clear that they’ve spent a lot of time thinking about fame and what they want to achieve.

The local guitarist and I finally start a punk band called Drama Machine that practices in our drummer’s parents’ basement in the suburbs. We release a well-written but badly recorded demo and play a few shows—the biggest is with Defiance, Ohio at the University of Hartford. (Our smallest is in our drummer’s parents’ basement, and no one comes besides the bands.) We book a DIY tour for the summer and get as far as Lexington, KY in a Toyota Corolla before turning back because the rest of the shows fall through. We break up shortly after that.

Graduation. MGMT releases their official debut EP, Time to Pretend, and tours with Of Montreal.

I languish in a nonprofit assistant job and email frequently with my Wesleyan friend Becky about the self-help book we want to write for recent graduates called Entry Level Superstar. Our notes include cynical nuggets of wisdom such as, “You will inevitably be given orders by people who are less friendly, polite, interesting, talented, attractive, and/or well-dressed than you are, and you will have no choice but to suck it up and do what they say.” I’m lonely and I’m not playing music at all.

MGMT record their first LP, Oracular Spectacular, with powerhouse producer Dave Fridmann. When Columbia Records releases it the following January, the one-time campus superstars who sang ironically about fame become actual superstars. “Kids,” “Time to Pretend” and “Electric Feel” seem to be playing everywhere all the time. They open for Radiohead, Beck, and MIA and hit the festival circuit, playing to massive crowds at Coachella, Bonnaroo, Lollapalooza, and several more events overseas. There are so, so many headbands involved. NME names their album the best of 2008, and it goes on to be certified gold in the US and platinum in the UK, Ireland, Canada, and Australia. I begin telling anyone who will listen that MGMT lived in my dorm, and lie that I saw them play at Wesleyan.

I move to Williamsburg and have a series of misadventures trying to start bands with Craigslist randos. Still frustrated with my job and grasping for something music-related to do, I answer an ad from the Bay Area-based music site The Owl Mag and start reviewing local bands’ albums and covering shows and festivals, which makes me feel like I have a place and purpose in the scene.

MGMT releases their sophomore LP, Congratulations, which sounds like: 1. The result of natural growth since their college days, or 2. An intentional rejection of their commercial success, depending on who you ask. It’s less of a critical and commercial hit than Oracular Spectacular and it alienates a lot of their fans, but the opportunities keep coming—they have another busy festival season and play SNL, Letterman, Fallon, and Kimmel. They’re also up for two Grammys including Best New Artist. My Wesleyan friends who attend our five-year reunion report back that “Kids” was on the playlist and everyone danced like crazy to it.

I finally start playing shows with my first post-college band, Delta Hotel. We play indie pop songs that are mostly about social isolation and release a well-written but badly recorded demo where you can hear that I had a cold when I did the vocals. We play a bunch of shows—the biggest is with Chelsea Wolfe at Le Poisson Rouge during CMJ. We last a little more than a year. Crushed but determined to keep going, I reluctantly start playing solo under the optimistic-sounding name Early Riser.

MGMT releases their self-titled third LP, on which they continue to experiment and move further away from what made their debut such a global hit. Regardless, they again play festivals throughout the spring and summer, followed by additional shows through the end of the year and a busy schedule of international dates in 2014.

I’m now playing keys in two bands with former members of Titus Andronicus and Care Bears on Fire. We play a lot of shows—the biggest are with the Vivian Girls at the Knitting Factory and JD Samson & MEN at 285 Kent. JD tells me I have great stage presence, which is the coolest thing that’s ever happened to me. Both bands record albums, only one of which comes out. Both bands break up, only one of them amicably. I’m devastated to have to start over again, but I waste no time in reviving my solo project—this time as a duo with my best friend and former bandmate Heidi—and we get a few slots as the musical guest on our friends’ comedy variety shows. We aim to form a full band so we can play punk shows without people talking over our sets.

After more than a year off, MGMT goes back into the studio.

Early Riser still struggles to find a permanent rhythm section but manages to record our first album with a full band. Shortly after that, I see Hamilton, the masterpiece of another Wesleyan alum, and share Michelle Obama’s assessment that it is “the best piece of art in any form that I have ever seen in my life.” At this point I’ve stopped telling people that MGMT lived in my dorm, and I start telling them that I saw Lin-Manuel Miranda’s thesis musical when I was a freshman. (I mainly recall it being RENT-esque.) Part of what blows me away about Hamilton is how much better it is than Lin’s student work. I’m genuinely affected by seeing the outcome of his 15 years of dedication to his craft since then.

MGMT returns to the North American festival circuit, with near-top billing on events including Sasquatch, FYF, Panorama, and Osheaga.

Early Riser’s album is co-released by two small-medium punk labels and we take time off work to go on a 10-day DIY tour with The Homeless Gospel Choir. The venues include a gorgeous old movie theater in Lowell, MA and a bike shop with a resident tortoise in Harrisburg, PA. It’s an extremely fun and rewarding experience—far more, as I tell my bandmates while we’re in a small New Hampshire town, than it would be to play giant impersonal shows day in and day out. In October, we play to about 100 people at The Fest in Gainesville—our biggest and most receptive crowd to date. We’re elated.

Ten years after the release of Oracular Spectacular, MGMT releases their fourth LP, Little Dark Age. It’s their most critically acclaimed album since their debut, and they have another busy year of US tour dates and international festivals planned through December. It’s now been 16 years since Ben and Andrew started The Management at Wesleyan, and 13 since they began playing professionally.

Early Riser finally solidifies our rhythm section and writes another album. We play a bunch of shows—the biggest is at Music Hall of Williamsburg at an interactive Wayne’s World screening where another band plays “Bohemian Rhapsody” live along with the movie. We’re excited about the future but manage to keep the focus on what’s right in front of us.

Now, when I hear “Kids” play in a store, I’m no longer tempted to use it as a measuring stick for my own progress. I realize that in the end, maybe a really catchy song by people who were once in proximity to you is just that. It’s not about you and it doesn’t belong to you, but so many other things are and do. MGMT may have said it best themselves: “Control yourself. Take only what you need from it.”

Kiri Oliver is a writer and musician from Brooklyn, NY. She wears bright colors and sings about her feelings in the folk-pop-punk band Early Riser. She was a music booker for The Chris Gethard Show from its public access days through its run on truTV. Follow her on Twitter here. 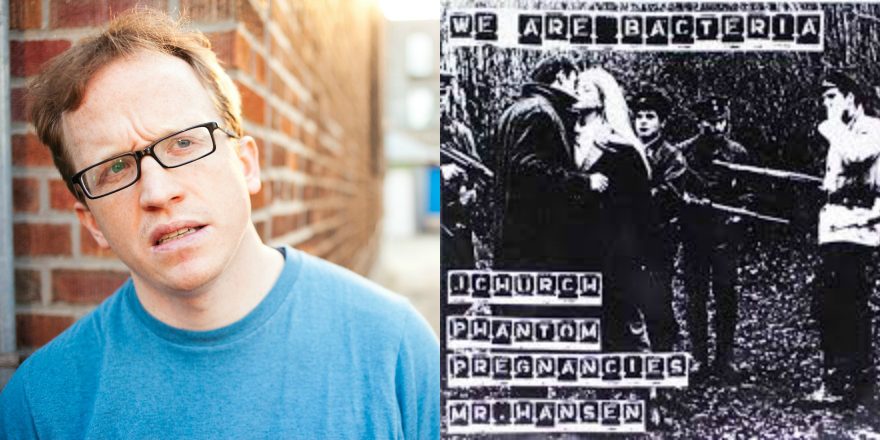