There are two directions you can go in this world if you’re choosing to live your life as an early ’80s synth-pop band (which, for the purposes of this discussion, you are); you can walk the path of Depeche Mode or you can be Erasure, Martin Gore or Vince Clarke — brooding and fatalistic, or joyful and romantic. The essential existential conundrum maintains; do you want to be fun or not? Either way, you’re still going to have to tuck in your t-shirt. And I’m not going to say which option is the “fun” one because I still want to be invited to haircut functions on both sides of the divide. Actually, I hate that theory. Two paths is, excuse me, never enough. For myself, I want my path to lead to a gravestone whose epitaph is a YouTube video of Wolfgang Press’ version of “Mama Told Me Not to Come” projected on the walls of the mausoleum of someone with more Twitter followers than I. For you, because I can’t have you biting my beyond-the-grave style, there is also THE THIRD PATH, but it’s not easy. Only for the brave is the cold treacherous path of… the Normal.

The Normal was the recording project of Daniel Miller, the founder of Mute Records. The Normal had one seven-inch single consisting of the songs “T.V.O.D” and “Warm Leatherette.” These two songs, whether taken as entirely po-faced or as high camp, created a synth aesthetic (knowing, depressive cool but also very amusing and amused, something that can be taken entirely in earnest if so desired or as just the soundtrack to a real solid cry into your drugs party) that is both, on the surface, pretty simple, and in reality almost impossible to pull off. Many a minimal synth band has achieved “boring as hell” in the attempt.

I have no idea what Vex Ruffin is attempting with his first full-length album. On the Stones Throw website, where I randomly found his album while looking for the Surface to Air Missive record, he lists his influences in high school as being the Cure and DMX. And he was signed after Peanut Butter Wolf took a chance on his demo. But the internet is, you know, pretty big and everybody can hear everything all the time and you don’t need to have the requisite haircut for, like, anything anymore. It’s a wild world, and I could be referring to the wild world of either Nick Cave, Cat Stevens or Maxi Priest… THERE’S JUST NO WAY OF KNOWING. So even though he’s about half my age, maybe Vex has heard the Normal, owns the 17-disc Mute Records box set and has a Fad Gadget tattoo on his ankle where the butterfly usually goes. Maybe. Or maybe he’s just a really interesting Los Angeles cat who’s making it all up as he goes along and is just blessed to have the Normal seven-inch for a heart, pushing that mean and deceptively simple blood through him. Whatever the root cause; it works. Well, it works most of the time.

Inspired by Madlib, Vex Ruffin (real name: Ryan Africa) recorded using an SP-303 for all samples and drum sounds and he’s traveling with a three-piece now. One of the truths about a lot of minimalistic bands, synth or otherwise, is that it’s hard to keep shit compelling for the duration of an entire album. That’s why there are so many great no wave and minimal synth compilation albums… if you had to listen to entire records by some of these artists, even ones with complete bangers for their singles, you’d slide into a deep sleep that would be easily mistaken for a coma by anyone who is not a music critic. The good news here is that Vex’s batting average is way better than, say, Trop Tard; I listen to this record all the time, almost straight through. The bass lines keep a groove like the one song on every old hardcore record where the skins would breathe for a minute and squares like me would always be grateful; still simple and driving, but not driving anywhere in particular, maybe to the other side of the basement. What a cozy drive! The Cure influence definitely shows on the vocals, at least in the melodies… in that there are actually melodies as opposed to the muted static mutterings of your average Brooklyn synth fascist. In fact, on songs like “Prime of My Life” and “Warm Life,” the melodies are so strong that there’s almost a ’90s/early aughts alternative rock tinge to them. Which is something I don’t actually want to hear in ’90s alt-rock (because I don’t want to hear alternative rock anymore), but adore over primitive beats and sample stabs.

The strength of the album, Vex’s debut after a series of EPs, does fade a bit over the course of the second half but, like I said, full albums are hard as hell. Only “Need More Followers,” which is either about Twitter or general cult shit, is a true bummer. But just because nobody at Stones Throw saw fit to point that out… well, God invented the skip button for you and me, and immediately afterwards is “Down in the Basement,” as potent a scuzz beat manifesto as was ever left off the Kids soundtrack. And the album ends on a high note with the, fuck it, lo-fi Pet Sounds nod of “Ruined.” Yep, I’m throwing in a Pet Sounds comparison. I’m achieving Dirty Dancing levels of backseat critical wildness.

Being near death and wearing irrelevance as a crown, I have no real idea where Vex Ruffin is coming from on his first record. Without knowing him, saying it’s a sum of influences would be foolish, imposing my own ill-spent youth of Normal and Birthday Party and BIPP compilation records on him. I can only judge the art product he manufactured. I’m heavily into it. I don’t know where it came from. I don’t know how it exists. It’s a mystery and solving mysteries is for pedants and God knows I don’t want to be THAT. I just want to hang out for a bit, sitting in the basement in a happy confusion. 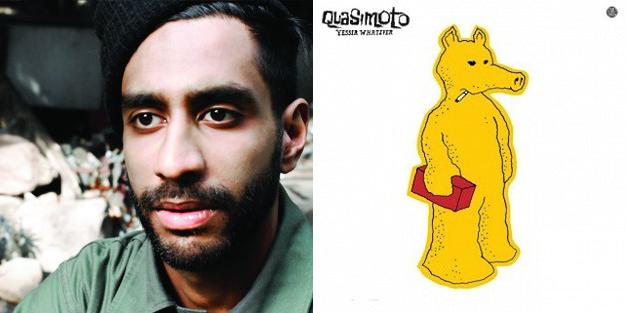