True Blue is the performance alias of New York City-based artist Maya Laner. She uses her skills as a multi-instrumentalist, producer, and songwriter to create songs that gesture at pop while retaining a subversive complexity. As much a visual project as a music project, True Blue conjures a world in each performance through movement, incantation, and fantasy.

Raven Artson is an LA-based, Dutch-born artist; Maya Laner is the former bassist for Porches, and a synth-pop artist who now performs as True Blue. The two friends recently put out a single together, “Hits Right,” and to celebrate, they hopped on the phone to catch up about it and much more.
— Annie Fell, Editor-in-chief, Talkhouse Music

Raven Artson: Hi, Maya. How are you? Good to hear your voice.

Maya Laner: Hi, Raven. Great to hear from you on the eve of your birthday — a little drunk. Honestly a perfect state of mind to have a talk.

Maya: OK, so, we made a song together. We took a chance — I traveled across the ocean to see if we can vibe and make some songs. Tell me about that experience, of making a place and inviting people to come, and the way you like to approach making work.

Raven: Mhm. Wait, is this a question?

Maya: [Laughs.] I fucking can’t. The question is: Our collaboration started because you invited me to come work with you at your home studio in Amsterdam.

Maya: Can you tell me about the way you like to work with other people?

Raven: Honestly, I think I just really love genuine connection. It’s really nice that as we grow older, we’re more comfortable to experiment. I feel that growing up and trying to do music [for me] was asking favors from everybody around me. Like, “Can I use a studio at night when you’re not there? Can I come on the weekends when nobody is around?” Right now, I’m at a point in my life where I’ve been able to build a small setup in my home where I can work 24/7. Obviously it’s super nice to be able to have that spot myself, and to be able to have people come over and use that spot for what it is. That’s just something I really like doing, and I love — this maybe sounds really pretentious, but just giving back to my younger self in that sense.

Raven: Yeah, but I wouldn’t even call it generous. It’s just kind of like, everything you do is back and forth, right? We’ve known each other for a few years and we’ve done some things over distance — I think we worked together one time in LA, and one time in New York, which is amazing. But also, for you to fly out to Amsterdam was a leap of faith. So it goes both ways.

Maya: Yeah, it requires a little bit of faith and trust for sure. It’s like a trust fall.

Raven: Yeah. But it’s nice. I think it also came at a time for you where you were probably ready to leave New York for a little bit.

Maya: Yeah, it was a very important — and expensive — trip.

Raven: What stood out the most for you, when you came over and we did the first song?

Maya: I think just how surprised by how nervous I was to go for it and allow flow state to happen. I felt like you were my spirit guide, learning how to not judge while creating, which is sometimes difficult for me. Usually the tension comes and goes, and when it comes, I was pretty uncomfortable. But it’s interesting, the moments when it hits right. [Laughs.]

Raven: I’m thinking about this a lot too recently. Today I was thinking, Oh, it’s my birthday, how do I feel about turning 28? I think we even had a conversation three weeks ago where I was like, “I would rather do stuff and find out it’s not working than prevent myself from trying things,” which I think has a lot to do with overthinking.

Raven: That’s where I think working together as artists, but also appreciating each other as friends is one-on-one, in terms of like allowing yourself to just go with it. There’s no need to analyze yourself in the moment. Like, it’s not possible. Which is a great thing when you’re creating, I think.

Raven: I was curious about your relationship to doing thing without overthinking, or taking your time to think about it and feel like you made like a deliberate decision.

Maya: I don’t know. I feel like I’m a very intuition-based person. Depending on the type of decision that needs to be made, I tend to go… I wouldn’t say it’s particularly fast, but I wouldn’t say it’s slow either. If it’s a really, really big decision, it’ll be a slow and painful one. But your first snap gut feeling about what you should do is, for me, usually where I arrive after the long process. What about you?

Raven: I don’t know. I feel like the older I get, the more deliberately I’m trying not to overthink anything.

Maya: What is overthinking to you?

Maya: Yeah, it does beg the question of what the difference is between being thoughtful and overthinking. Do you feel like you’re able to catch yourself now if you’re going too far? Like, what does that feel like? How do you know?

Raven: I feel like it’s a constant struggle, or conversation, with yourself. But I mean, I love the corny, inspirational quotes that I think we’ve also talked about — today I read something that was kind of like, “People are going to remember you for your successes rather than your failures.” It resonated with me in terms of being like, it’s OK to try a billion things and fail, and then the things that you don’t fail at are the things that you feel good about yourself and the things that people around you remember you for.So that kind of gives me some peace of mind in being like, Oh, let’s just try it out and we’ll see what happens.

Even with the song we’re working on right now — you were like, “I have this idea for this song that I did and I’m not sure about it, but it’s been kind of with me for a couple of years.” And then we tried it out and we were vibing super hard with the two of us, and then everyone we shared it with was vibing so hard.

Raven: If something is on your mind for such a long time, it’s like worth it to try it. And if you think about it, you can never lose in trying anything. The worst that can happen is it’s a bad idea and we move on.

Maya: You make it sound so easy.

Raven: I know, but it’s also because when I work with you, I respect you so much as an artist and as a creative person that I can enroll myself more in the producer role where I’m like, I would do anything to try to make you feel comfortable. I just love our dynamic as a creative deal in that sense.

Maya: Me too, and I appreciate that so much. When you were talking about overthinking, [it reminded me] about how for this release, we chose to release it fast and we made the song quite fast. And I sort of feel like that mirrored the spirit of the song, which is just fucking do it.

Raven: Yeah, I love that.

Maya: I have been caught in overthinking releasing music for a couple years. It was so good to break the seal and not take it so serious, and just have it come from this place of joy and sharing. Like, “Here’s the song that we made. It’s a vibe.”

Raven: Exactly, yeah. Because also, I mean, I’ve never been around huge records or anything, but recently I’ve been talking to people who have songs that have done well commercially, and they kind of confirmed what I’ve been thinking, that everybody is just kind of doing whatever. Even though if you’re not close to it, it seems like there’s a crazy master plan behind it. But eventually, it just comes down to people vibing with something or having an idea or a concept and communicating that with the rest of the world. It’s not some crazy scientific code you have to crack. Either it works or it doesn’t.

True Blue is the performance alias of New York City-based artist Maya Laner. She uses her skills as a multi-instrumentalist, producer, and songwriter to create songs that gesture at pop while retaining a subversive complexity. As much a visual project as a music project, True Blue conjures a world in each performance through movement, incantation, and fantasy. 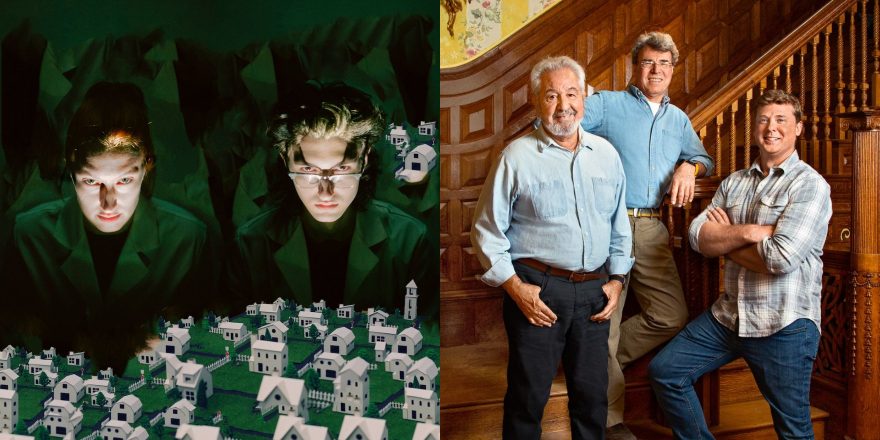 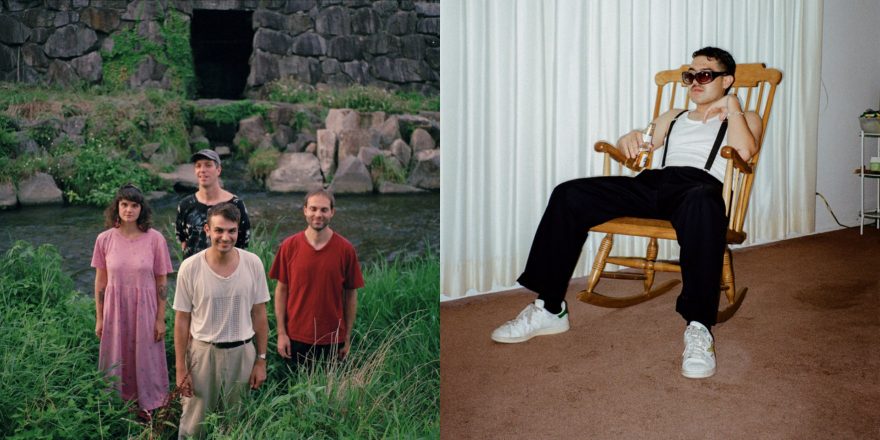 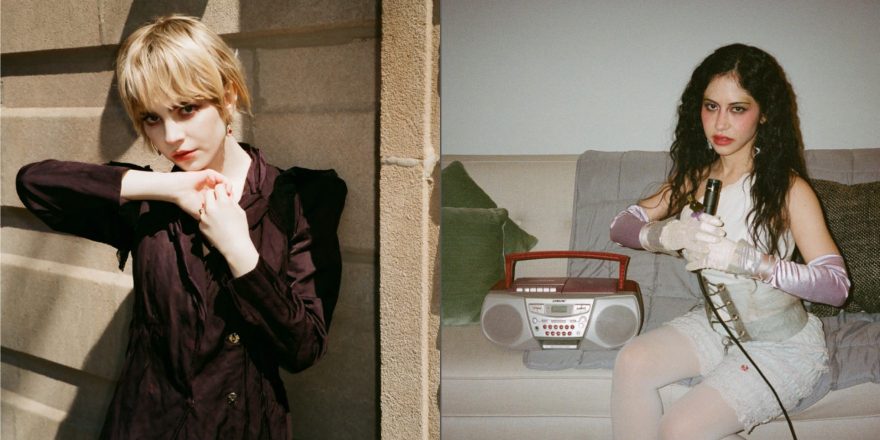 Sophie Thatcher (YellowJackets) and Shallowhalo Get Into Character