Three Great Things is our series in which artists tell us about three things they absolutely love. Eric D. Johnson of Fruit Bats narrowed it down to some good ones, and chatted with me in advance of his excellent new album, Gold Past Life, out June 21.
—Josh Modell, Executive Editor, Talkhouse

I actually haven’t been drinking alcohol lately, but I want to talk about Bloody Marys. Even when I was a kid, I got the virgin version — I always liked salty things like that. It’s a little bit of a Midwestern thing, maybe kind of a Wisconsin thing. My whole family is from Kenosha, and I think I may have gotten the taste from my mom, who is a native Wisconsinite. She’s not a partier, not a hair-of-the-dog kind of person. My cousins would talk about these legendary Bloody Marys they got up north in Wisconsin, deer hunting or something, like, “It had a jumbo shrimp in it, and a pepperoni stick!”

I like the notion of something that gives you a buzz, has saltiness to it, and then there’s a snack element, literally within the drink. That’s just exciting to me. I think since I moved to southern California, I’ve moved into micheladas. People have the same fascination for those here — it’s like a beer Bloody Mary, basically.

People have talked about Jaws a lot, but I think it’s kind of perfect. I can watch it a lot and get something out of it every time. Spielberg was just so good at giving you a very comfortable home life to look at — like a comfortable version of American life, which he kind of continued to do over time. But I like that the story ultimately comes down to three men in a boat. You’re seeing these three different kinds of masculinity at play with each other. I’m of course always empathizing with the Richard Dreyfuss character. A lot of traveling and swapping war stories and searching for this monster that you’re trying to slay. It’s just perfect from start to finish.

My other idea was going to be the Nonesuch Explorer Series, which went from the ’60s to the ’80s, these incredible world music releases that were halfway field recordings and halfway albums. I wanted to talk about that, but I’d be way more rambly, so let’s talk about my dog.

He was a Mexican street dog, from Baja. He got sent up to Oregon, which a lot of dogs who get rescued do — it’s a no-kill state. You can send a dog up to a shelter there, and you know they’re not going to be destroyed. This dog was basically a wild animal before we got him. He didn’t know stairs. He didn’t know how to get into a car. He had basically just been living in the bushes his whole life. He’s staring at me right now.

He’s just a totally good egg. He’s almost like the perfect notion of how man and dog came together. They were these wild animals, and they would come over by our fire, and we would throw them scraps of wooly mammoth meat or something like that. Dog language is kind of similar to ours, and they have a similar society to humans. We didn’t meet him when he was wild, but he had been totally wild. We took him to this trainer and she described him as the perfect example of the Darwinian survivalist. Some of these street dogs will figure out that if you’re really cool to people, that people will help you out. He’s a good dude.

It’s my first dog I’ve ever had. I grew up mostly in apartments, moving around. I’m getting my mind blown by being a dog guy. I liked dogs but was ambivalent toward being a serious dog person.

His name is Pinto. Not like pinto bean, but like a pinto horse — he has some of the markings of a pinto horse. I was actually away on tour and my wife saw him and grabbed him, sort of without consulting me at all — I’m really glad she did. I was on my way to this tour, kind of dozing off on a plane and I had a weird flash in my head about a dog named Pinto. And when I landed and got into my hotel that same night, she texted and said, “I got us a dog.” I was a little mad, but I said, “OK, but his name is Pinto,” because I had a vision of a dog named Pinto that day. And he has the markings of a little pinto horse!

Is there a connection between my weird dog-naming fantasy and getting a dog? Yes and no. I’m not really one of those people, but it was weird. Whether it was a cosmic connection or truly random, I don’t know. It seemed too perfect, so his name had to be Pinto. I wish I could bring him on tour sometimes. I miss him. I’ve tried to write songs about him before, but nothing has quite come out. But there will be epic poems written about this guy one day. 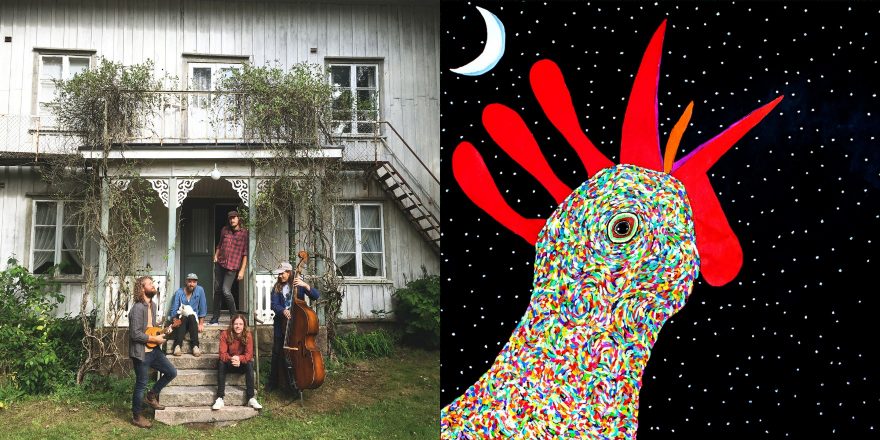