Camille Thoman wrote and directed the 2017 thriller Never Here, starring Mireille Enos and Sam Shepard, a genre-blend between a classic Hitchcockian suspense mystery and a harrowing journey into disintegration of self. It is in theaters and on VOD from October 20 through Vertical Entertainment. Thoman’s award-winning documentary The Longest Game, which follows a group of zestful octogenarians who’ve daily for 25 years for a game of “paddle tennis,” will premiere on PBS in Spring 2018. In 2006, Thoman directed the short film Falling Objects, starring Mireille Enos, Timothy Hutton, Melissa Leo and Kevin Rahm. Her solo performance pieces have toured the U.K. and been performed by her in London at The Young Vic and the Battersea Arts Center.

Words are funny things, aren’t they? By delineating one segment of your experience, you are necessarily leaving out another. In matters of the heart particularly, these murky facets of experience can defy rational telling … and this is the case with what I am about to write. It’s also the subject, in many ways, of my new film, Never Here (above). How “the truth,” one’s perception of “objective” reality, is a construct of one’s own interpretation.

From my late teens to mid twenties, I was functional on the outside, and decimated within. A smoking ruin. I wrote in my notebook at the time, “I am a set of atoms, a selfish tribe.” I still see this as true; I am a tribe of atoms, but that notion doesn’t carry the sheer terror that it did for me in those days. At the time, I would look at my hands, and not understand who they belonged to. One day, walking on the street, I remember having the impression that I was made up of thousands of red ants and I watched in my mind’s eye as each ant left the tower of my body and crawled away onto the street – leaving nothing in the space that I had referred to as “me.” For years, I felt pain in my chest and in my back from the moment I woke up to the moment I went to sleep. Occasionally, in the bath in the fetal position, as the water would fill up around me, I would feel the pain relent. The sum total of these kind of events was to doubt the fact of my existence. My pain I could not deny, but my existence I could. So, I came to believe that I was [most likely] dead, and [most likely] living in hell.

I don’t have what is typically considered to be a “good” reason for my experience. I wasn’t raped. No one had died. My parents had gone through a painful divorce a few years before, and my relationship with them was challenging, but whose isn’t?? I was living with my boyfriend, who I’d been with since high school, and we fought. We fought all the time. And I was mean. I saw I was capable of destroying someone I loved. And, for a period, that knowledge was enough to submerge me.

At the time, I was living in the English city of Bristol, where I went to university. I tried to tell people what was happening. I would say: “Something’s wrong.” They would say: “What is wrong?” I would say: “I am not myself” “My chest hurts” “I’m living in a movie” “I think I have died.” Or, “I think I have died and you might be a monster.” Sometimes, “I can’t find my love,” or “I don’t have any love.” But I would say these things casually, and then quickly bring up something else so my friends and family were not required to notice. “It’s not like you were in Viet-nam, for Chrissake,” my mother said once when I tried to explain.

It was at this point my body started talking. I started creating wordless, gestural performance pieces. Close to dance, but utilizing light, sound and projection. I did not understand with my brain the gestures and images I was making, but I knew they were potent. People would see my pieces and sometimes cry. They would also say, “I don’t understand why I am crying.” I started in my bedroom with a boombox (this was a long time ago), a black stocking and some blue paint, and two years later found myself on tour around the U.K., performing my shows Numb and Numb b. in theaters like the Young Vic and BAC in London.

Back at the University of Bristol, I was heading for disaster. I went to a therapist. After five minutes in his office, he told me I was bipolar and needed medication, and that I wasn’t ever going to get better. I thanked him for his time and left. I tried yoga, breathing classes, reiki, running. I tried suicide a couple of times – not “seriously” (though please believe me when I say every attempt at suicide is serious), but as a classic cry-for-help. Not effective. When I told a family member I had just been in the hospital after a suicide attempt, she said, “That’s no excuse for you missing your flight,” and hung up. I don’t think even my closest friends were aware that this was transpiring, though I did tell them. I have had the same best friends since I was five years old. They are true friends, pillars of support. My sister is the best sister in the world. My mother is a loving mother. It’s as if during this period there was some kind of magic spell on me. Try as I might, I was not able to communicate what was happening in any way that enabled me to mobilize or get help from my community. Much of what I was trying to say defied verbalization, and I was so ashamed of my pain.

Now, I understand there to be different medical terms for my experience. PTSD. Depersonalization disorder. Recently, I heard about the Cotard Delusion, where people believe they are already dead or do not exist. “There’s a name for what I had!” I thought in amazement. At the time, PTSD wasn’t the household term it is today, and it was laughable to associate it with me. When I did eventually get the message across to my parents that I needed some help, they sent me to a shrink. He explained it to me something like this: “You’ve been standing on like a wooden platform and underneath the platform is deep crevice that goes into the center of the earth and way back into your childhood. When you and your boyfriend started to fight, it busted the platform and instead of falling and scuffing your knee, you fell into the crevice.”

The summer I was 21, my mother and her friends decided to go on vacation in Southern Africa. My sister and I were invited. When I got down there, I told my family I was going to stay. That decision probably saved my life. I got a gig with the local branch of Save the Children. I shot internal videos for them, and in exchange they put me up and sent me to remote locations. I spent nine months in Africa. Thank God – my mother encouraged me. Her encouragement was as or more pivotal to me as any understanding I had longed for. Thank God – she put $1,000 in my account. (My story is a story of privilege; this does not escape me.) Thank God – the University of Bristol allowed me to take two years off and come back and finish my degree. First in Africa, then in South America, I … lived. A little more each day. Breathed a little more each day. I always followed my rule: every day, do one thing you are afraid of. I believed that if I could keep facing what scared me, I could survive. I backpacked, hitchhiked, traveled, explored. I imported djembe drums into New York City. I crossed the Kalahari desert on a motorcycle. I met loving families and friends who took me into their homes.

It’s not like I got “all better.” It’s more that I was able to understand, for the first time, that every day I could put one drop of life into the reservoir of my soul, and eventually … in many years … I would be full again. I’m still putting those drops into my reservoir every day. Some days, my reservoir is positively overflowing with love and goodness; some days, not so much. I no longer live with the kind of pain I used to endure. I feel my love. I feel myself. And during this 20-year-long odyssey back into myself (that I am still very much on), I have learned lessons that truly I could not have learned any other way.

I often get the feedback when people meet me about how “positive” a presence I am — a victory each time I hear it. I’m so proud of the films and theater I get to make, partially as a result of this dark experience. The fact that I’m a director is not a result of what I went through – I was making films and plays already when I was seven years old – but I am on a quest to bring myself always closer to myself and to our earth and the people and beings on it. And looking at change, at metamorphosis – whether through the lens of an uplifting documentary (The Longest Game) or an unsettling thriller (Never Here) – is one of the ways in which I am dedicated to doing that. Now that I am on the other side of the experience, I can see how functional and necessary it is to question what we see as fixed. I can see that where people believe they — their identities, their opinions, their sense of the world — are fixed, they cannot move. Where people cannot move inside themselves, there is war, of all kinds, on a global scale, or intimate wars, like the kind I waged with my college boyfriend. And I am on the job of bringing more life and movement to myself and to everyone I touch, droplet by droplet.

Camille Thoman wrote and directed the 2017 thriller Never Here, starring Mireille Enos and Sam Shepard, a genre-blend between a classic Hitchcockian suspense mystery and a harrowing journey into disintegration of self. It is in theaters and on VOD from October 20 through Vertical Entertainment. Thoman’s award-winning documentary The Longest Game, which follows a group of zestful octogenarians who’ve daily for 25 years for a game of “paddle tennis,” will premiere on PBS in Spring 2018. In 2006, Thoman directed the short film Falling Objects, starring Mireille Enos, Timothy Hutton, Melissa Leo and Kevin Rahm. Her solo performance pieces have toured the U.K. and been performed by her in London at The Young Vic and the Battersea Arts Center. 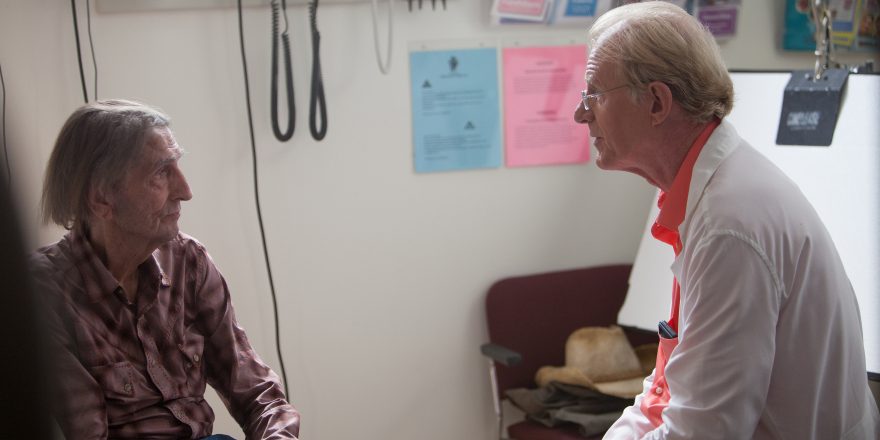 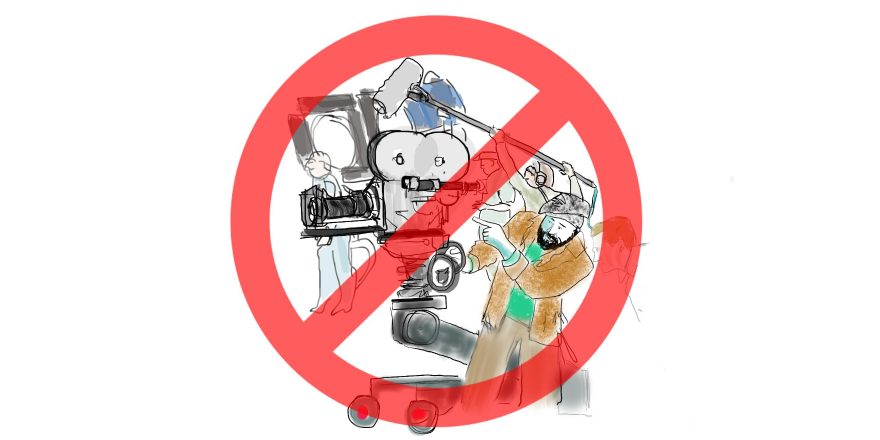 The Night I Died That Changed Everything