Richard Stanley is the director and co-writer of H.P. Lovecraft’s Color Out of Space starring Nicolas Cage, Joely Richardson and Tommy Chong, currently playing on a screen somewhere near you. Stanley made his directorial debut with the apocalyptic sci-fi horror film, Hardware, and returned to his South African roots with his second feature film in 1992, the supernatural road movie romance Dust Devil, cementing his status as a cult director of genre cinema. The production of Stanley’s third feature film, The Island of Dr. Moreau, starring Marlon Brando and Val Kilmer, was fraught with legendary challenges that eventually led to the director’s ousting from his own dream project, to be replaced by John Frankenheimer. Stanley’s experience on the film led to the award-winning documentary Lost Soul: The Doomed Journey of Richard Stanley’s Island of Dr. Moreau. For Stanley, bringing Color Out of Space to the screen represents the culmination of more than 20 years of preparation.

The year 2020 will be remembered as the year H. P. Lovecraft’s “Cthulhu mythos” entered the mainstream – the year the fictional squid god’s ultra dimensional tentacles finally penetrated every aspect of pop culture – yet why now? What is it about our contemporary gestalt that has elevated this unlikely author into a household name and given his twisted fantasies lease over our shared unconscious? Jordan Peele’s Lovecraft Country is about to hit our screens and Game of Thrones impresarios Benioff and Weiss have already thrown their hats into the arena, backing off from the Star Wars universe to tackle their own long-mooted Lovecraft project, this news coming hot on the heels of SpectreVision’s recent announcement of a cinematic “Lovecraft trilogy,” three major new adaptations of the author’s best known works, spearheaded by the release of my film Color Out of Space to U.S. theaters this month. We are clearly poised on the brink of a major revival of interest in this troubling body of work – the runaway creation of an equally troubling man whose views are known to be tainted by elements of racism, fascism and misogyny. What indeed does this say about our species and the times we live in?

I have any number of Lovecraftian T-shirts in my possession and for some years now have worn a Cthulhu badge sewn on my combat jacket, so I can testify from first-hand experience that the pasta-faced alien squid god is a known figure to children in Russia, Africa, Japan and the heartlands of the French Pyrenees, all of whom can happily identify the ubiquitous beast by name. For some years now, we have been immersed in a rising tide of mythos merch – plush toys, pop-up books, T-shirts, board games, even Lovecraftian cookery books – despite the fact there is no direct corporate sponsor nor any advertising agency directing this otherworldly assault on our hearts and minds. I have little doubt we are witnessing something akin to a psychoactive virus that has finally reached pandemic status or what evolutionary biologist Richard Dawkins termed a “religious meme,” a new idea, style, fad or form of behavior spread through imitation and capable of evolving through natural selection in a similar manner to biological evolution. Dawkins coined the term in his 1976 book The Selfish Gene in a well-intentioned attempt to describe how ideas, ideologies and religious beliefs reproduce themselves as a viral phenomenon within our culture. As a highly vocal proponent of atheism, the good doctor would perhaps be surprised and not a little unsettled to find his theories exemplified by the manner in which Lovecraft’s oddly addictive brand of cosmic supernaturalism has successfully wormed its way into the 21st-century zeitgeist.

At the time of Lovecraft’s death in 1937, his work was little known, having seen publication only in pulp magazines and amateur periodicals. Raised in Providence, Rhode Island, by his aunts after both parents were committed to an insane asylum, the young Howard Phillips Lovecraft was slow to make friends and remained a misanthropic recluse for much of his short, unhappy life, perishing at the age of 47 from untreated stomach cancer. His slender literary output, taking off at a vertiginous angle from Poe and the gothic fantasies of the 19th century, was directly inspired by vivid nightly dreams which the young seer duly recorded in his commonplace book, becoming the basis for a body of work that achieves a rare oneiric power, transcending both generic tropes and the author’s lack of interest in conventional characterization or even recognizable human emotions. Lovecraft may have written throwaway characters, but he most certainly did not write throwaway stories.

The author typically attributed his dreams to chronic indigestion and whether the cancer caused the dreams or the dreams caused the cancer is a moot point. In his mind’s eye, the lonely recluse saw and later effectively described a multidimensional universe inhabited by impartial alien deities that symbolized his mechanistic atheism and the vast and formless forces of chaos he believed were the true organizing principle that underlay the warp and weave of day-to-day life. From this hypnagogic font sprang great Cthulhu, the ultra-dimensional squid god whose tendrils made up the very coils of our waking world and, deep in his tortured slumber, Lovecraft envisioned a book that contained an alternative creation myth and humanity’s true position in the cosmos – an imaginary grimoire evocatively entitled the Necronomicon, literally the book of “dead names,” a tome described with such morbid authenticity that subsequent generations of casual readers and occult scholars alike assumed it to be a genuine historic document. It was, in truth, a literary creation so potent that if the book did not at first exist then it soon would, willed into being by the collective imagination of the public.

During his lifetime, Lovecraft jovially reminded correspondents that his creations were entirely fictional, but this did not stop several different publishing houses posthumously issuing counterfeit Necronomicons, each one falsely claiming to hold the true secrets of our universe. When other writers and scholars asked after the book’s existence, Lovecraft playfully encouraged them to make their own additions to his burgeoning mythos, effectively sowing the seeds for an occult cottage industry that only came into its own after his passing when the woeful state of the author’s legal affairs left much of his work in the public domain. Critical and mainstream acceptance of this curious contribution to American letters came more slowly. Reviews of the first hardback anthologies of Lovecraft’s short stories to appear after the war were scathing and haughtily dismissive, an attitude exemplified by the foremost critic of his day, Edmund Wilson, who wrote in a 1945 edition of the New Yorker, “The only real horror in most of these fictions is the horror of bad taste and bad art.” Avram Davidson, editor of the magazine of Fantasy and Science Fiction, was more to the point, dismissing the hermit of Rhode Island with a single slash of his poisoned pen: “In short, Howard (Phillips Lovecraft) was a twitch, boys and girls, and that’s all there is to it. … Lovecraft was as nutty as a five-dollar fruit-cake.” 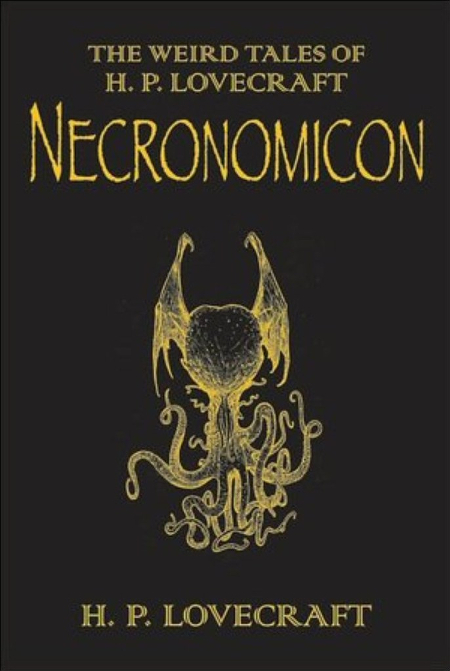 The British writer and critic Colin Wilson came closer to the quick in his 1962 analysis, The Strength To Dream – Literature and the Imagination, in which he compares Lovecraft to the Düsseldorf Strangler, writing: “In some ways Lovecraft is a horrifying figure. In his ‘war with rationality’ he brings to mind W. B. Yeats. But unlike Yeats, he is sick. … Lovecraft is totally withdrawn, he has rejected ‘reality’; he seems to have lost all sense of health that would make a normal man turn back halfway … but although Lovecraft is such a bad writer, he has something of the same kind of importance as Kafka. If his work fails as literature, it still holds an interest as a psychological case history. Here was a man who made no attempt whatever to come to terms with life…”

If Lovecraft failed at life and literature, then he succeeded in introducing a surprisingly potent metafictional meme to the body politic, a metaphysical virus that continues to proliferate across every platform of contemporary media. His books were widely reprinted in paperback from the sixties onwards and I was duly indoctrinated into his weird world view as a child, having a decent working knowledge of the mythos by the time I was 13 and old enough to wield a camera. Cinematic adaptations of Lovecraft’s work were (perhaps unsurprisingly) a mixed bag. Early entries such as The Haunted Palace (a loose take on The Case of Charles Dexter Ward, starring Vincent Price) and Die, Monster, Die! (an adaptation of The Colour Out of Space, headlined by an elderly Boris Karloff) stripped the material of its mad science and any metaphysical meditation, attempting to reposition the stories within the creaky matrix of the then-current Poe franchise, a nineteenth-century model that Lovecraft had inherently rejected. Later entries, notably the work of director Stuart Gordon (Re-Animator, From Beyond, Dagon, et al) were more successful in broadening the reach of the mythos which, by the eighties, embraced a widening slew of comic books and role-playing games. Perhaps as a natural human reaction to the sheer bleakness of Lovecraft’s cosmic nihilism, subsequent generations have responded by turning the Old Ones into toys, the subject of jocular Christmas carols, cartoons and fridge magnets, reducing the inexpressible to something they could at least get a handle on. Cultural commentators and wannabe social anthropologists are still trying to get their heads around the concept of a shared creative universe, yet Lovecraft accomplished something that goes beyond the much-touted achievements of the recent Marvel comics movies and their imitators. He initiated an ever-mutating, ever-expanding shared universe that exists utterly beyond copyright or corporate control – a self-perpetuating mythos in which the readers and viewers are themselves invited to actively participate.

Given the protean deity’s fictional origins, great Cthulhu can never be discredited any more than he/she/it is likely to be exposed as a pedophile or sexual predator like any other saint, spiritual guide or guru, making his tendrilled presence an ideal icon for a post-truth era in which our very environment is seemingly turning against us. I suspect in two or three hundred years from now, should humanity survive so long, Cthulhu and the Necronomicon will still be with us, whereas a great many other contemporary religious movements (Scientology, TM, ISIS, Christian Identity, you name it) will have happily faded from memory.

Richard Stanley is the director and co-writer of H.P. Lovecraft’s Color Out of Space starring Nicolas Cage, Joely Richardson and Tommy Chong, currently playing on a screen somewhere near you. Stanley made his directorial debut with the apocalyptic sci-fi horror film, Hardware, and returned to his South African roots with his second feature film in 1992, the supernatural road movie romance Dust Devil, cementing his status as a cult director of genre cinema. The production of Stanley’s third feature film, The Island of Dr. Moreau, starring Marlon Brando and Val Kilmer, was fraught with legendary challenges that eventually led to the director’s ousting from his own dream project, to be replaced by John Frankenheimer. Stanley’s experience on the film led to the award-winning documentary Lost Soul: The Doomed Journey of Richard Stanley’s Island of Dr. Moreau. For Stanley, bringing Color Out of Space to the screen represents the culmination of more than 20 years of preparation. 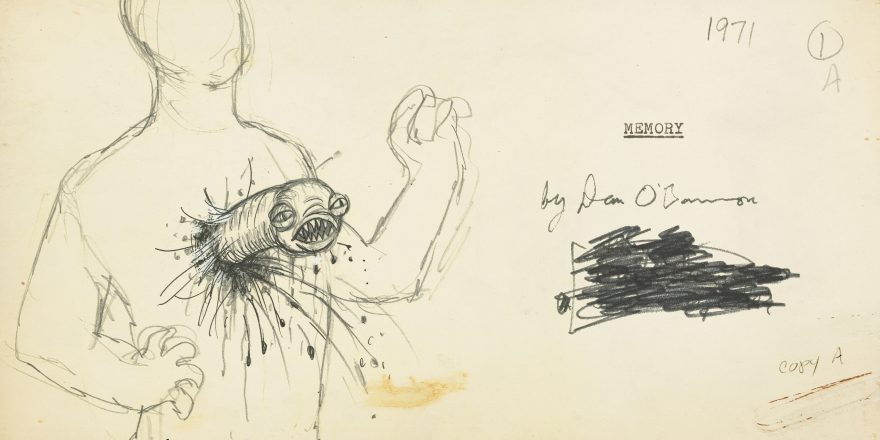 Bursting From Within: Why Alien Struck a Nerve