First, assemble in the basement. Write as many songs as you can, as fast as you can, and then record them in the cheapest way possible. Second, go out and try to play them for as many strangers as you can, in as many basements as you can, while spending (and often making) as little money as possible. You get everybody in a room, you do your thing, and you’re onto the next one — rinse and repeat. This is a good system, and I stand by it to this day. But it is not, as I have recently learned, the only system.

I guess, after fifteen years of the same thing, I wanted to try something else. It felt uncomfortable, but my friend Rozco once told me that if you’re not at least a little uncomfortable, you’re probably not learning anything.

It’s ironic, because I made this record (Impossible Sum, out Sept. 25, 2020 on Lauren Records) in near-isolation — before making records in isolation became a necessity or An Angle. Either way, the truth is that we were all separated. Kyle Pulley and I recorded all of my parts at his studio, Headroom, in our shared home base of Philadelphia. Adam Beck, my other main collaborator on this record, played all the drums at his place in Chicago. When it came time for other contributions, they were also largely remote. At the time, I thought it was funny, being so reliant on constant emailing in order to make music. Now that we all live in COVID-land, it’s practically a necessity if you want to involve anybody else in what you’re working on.

In spite of the disconnected nature of its origin story, it felt really, truly GOOD to make this record. The process was unlike anything I’d ever done before. We broke songs down and built them back up. We scrapped fully completed sections and arrangements. We asked ourselves hard questions, and always tried to work in service of the song. We listened to A LOT of Tom Petty records — with and without the Heartbreakers. We took our time and tried to make each little piece the best it could be, and what I found was that it provided an entirely different kind of satisfaction than just bashing shit out in the basement. Both are good, but it felt special to dig deep.

I had the idea to ask one of my favorite vocalists, Laura Stevenson, to sing with me on something. I’m not sure if she remembers it, but we’d actually made music together once before. It was the fall of 2005, I had just turned 16 and I was watching Jeff Rosenstock’s old band Bomb The Music Industry! — a band in which Laura played keys and sang—play on the floor of a sports bar in my hometown of Cleveland, OH.(Sidebar: I discovered many years later that that particular show happened to have birthed this song.) BTMI! had a “Bring Your Own Band” policy that stated that if you knew any of their material, you could play it with the band. So here I am, bleached-blonde mop and all, underage in a college bar, freaking out about getting to play with a group of musicians who were nearly a decade younger than I am right now who were making frantic, catchy, and often unintelligible ska-punk-hardcore songs about drinking beer in the shower and not shaving your beard before a job interview. I loved that band — I still do.

Anyway, sometime around that show, Laura started writing her own songs, and quickly evolved from “extremely talented person in the scene with me and my dumb friends” to “real-life grown-up genius-level songwriter.” Her involvement with this song, “Left In The Living Room” happened pretty quickly once I gathered up the courage to send her a text message and a demo, and having her voice on this record is a true honor.

The other new presence on this song is the lap steel played by Mike “Slo-Mo” Brenner. Mike’s been a fixture in the Philadelphia music world for a few decades now, beginning with his band The Low Road in the late ‘80s and early ‘90s, but I came to know his playing through the work of the late great Jason Molina of Magnolia Electric Co. and Songs: Ohia. I’d heard his name before, but didn’t realize we had mutual friends until I read the credits of a record that my tourmates Wild Pink had made. Messages were exchanged, and all of a sudden the guy who played the lead on “Farewell Transmission” was down to work on something I’d written. I could have kicked a hole through the wall out of sheer excitement, but I was really hoping to get my security deposit back.

The word “patchwork” used to scare me, because it represented a kind of piecemeal, compromised, highly edited version of music production that I shied away from for a long time. But what you’re hearing here is very much a patchwork of musicians and influences. It’s me giving the controls to other people and letting ‘em do their thing. We’re all precious about what we make, but working on this song and this record showed me how inviting other folks into your world can elevate what you already know how to do.

I guess that’s the point: The joy is in the making, and it’s often better when shared. For a long time, making records was about having a product to support while you get in the van and do the “real work.” But that’s so goddamn backwards. For most of my teens and twenties, I wasn’t focused on making records in the moment. I had my eyes trained three months, six months, a year down the line at what that moment was supposed to lead to. And that’s a very good way to cheat yourself out of what I now know to be one of the most joyful things the world has to offer: creating something with people you trust and respect. I guess in a way, that’s kind of what this song is about: opening yourself to other people who are positive presences in your life and meeting them where they’re at. Without adhering to that process, the song wouldn’t have landed where it did, and I believe that both the record and myself are better for it.

Even if relinquishing control sounds great in theory, it definitely felt unnatural handing the keys over to other folks, and my anxiety grew as I waited in mix purgatory. The email came in, and I sat in the living room of my old house on York Street with the aux cord plugged directly into my laptop and hit the spacebar. I heard Laura harmonizing a chorus I’d written, and Mike’s lap steel gliding on top of the chord progression. Hearing people other than my usual bandmates play and sing words that I’d written on a recording was a thrill all its own, but it wasn’t just a new voice and new instruments. It was THAT voice and THOSE sounds. I especially loved that their contributions weren’t note-for-note what I had written, either — they’d both made it their own, in the way that only they could; a vocal and an instrument condensed into parallel glowing beams that someone tricked into being committed to tape. They are sounds that exist far beyond myself or anything I’ve ever done, and I’m just grateful to share the same orbit with them for a few minutes.

When I come back down to earth I know that truthfully, this song, and the record on which it appears, is just a product of a few kind people making music because they enjoy it, because they had an opportunity to make it, or maybe they just wanted to do someone a favor. I’m not even sure if the reason matters. It’s all legit. My hope is that we all just do this because we like doing it, which is one of the best reasons to do something. So I played the rough mix over and over again, skipping back to my favorite sections so I could focus on everyone’s individual parts and thinking, “OK, I’m somewhere different now. What’s next?” 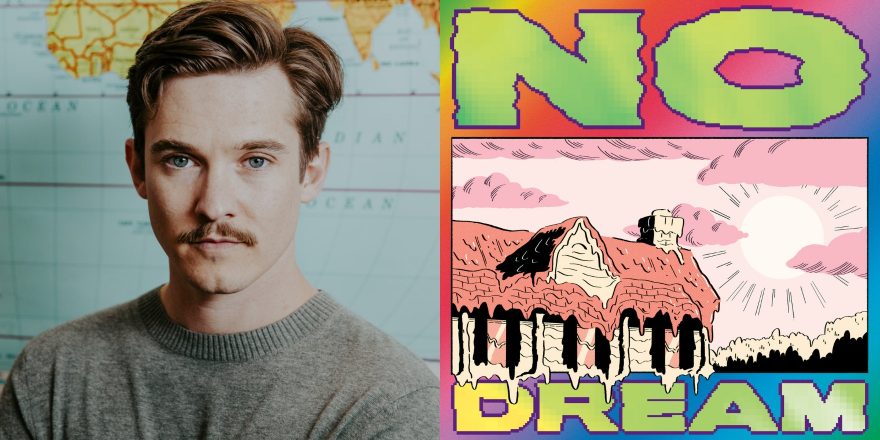 Some Suggestions Re: Jeff Rosenstock’s NODREAM