Wes Hurley was born Vasili Naumenko in Vladivostok, Soviet Union. After immigrating to the U.S. with his mother, Hurley studied drama, interdisciplinary arts and film at the University of Washington. His autobiographical dark comedy, Potato Dreams of America, premiered at SXSW 2021 in Narrative Feature Competition and is currently available on VOD and DVD. He has written, directed and produced dozens of award-winning queer shorts, three feature films and two seasons of Capitol Hill, a series he created for the Huffington Post which went on to be picked up for television in Europe and Canada. Hurley is a recipient of Creative Capital Award, Seattle Mayor’s Office of Arts and Culture Award, City Arts Magazine’s Artist of the Year and Advocate Magazine’s Person to Watch. His documentary short Little Potato won the Jury Prize at SXSW, along with 27 other awards around the world, and is currently streaming on Criterion Channel. (Photo by Bronwen Houck.)

It’s a couple of years ago, I’m sitting in a movie theater in Vancouver, Canada, and as the end credits roll, I find myself struggling with a strange and unfamiliar mix of emotions. The film I’ve just seen is Jojo Rabbit, and the conflicting feelings are brought on by my being both an audience member and a filmmaker midway through my most important and personal production to date. The audience member in me is luxuriating in that special kind of joy that comes from seeing a great work of art that speaks to you on every level – entertaining, thought-provoking, soul-renewing. The filmmaker in me is deeply and bitterly sad.

Though Jojo Rabbit is nothing like the movie I’ve been trying to make for the past six years, I realize that my work will inevitably be compared to it. Potato Dreams of America, my faithfully autobiographical tale of growing up in (and desperately wanting to escape from) the collapsing USSR, also revolves around a precocious boy and his heroic mother amid great national upheaval. It too uses comedy and heightened whimsical tone to deal with personal heartbreak and political repression. Inspired by the long tradition of magic realism in literature, I even brought in Jesus Christ as a supporting character – my alter-ego’s best friend – to illustrate my childhood obsession with Christianity. Although Jesus and Hitler are not exactly in the same camp, and my film is based entirely on true events pulled from my own life and written many years ago, it will surely summon comparisons for a chunk of our shared audience.

I try not to wallow in disappointment, especially since the film I just saw is a genuine masterpiece that, under different circumstances, would inspire in me nothing but renewed faith in Hollywood cinema. But it just seems so unfair. I’ve been fighting to tell my story for years; self-proclaimed producers and investors have come and gone, leaving me scarred by their lies and gaslighting. For the past five years, I’ve many times woken from a dream where my film is in production and felt like sobbing, because in the waking world all I had was an unproduced screenplay. Finally, with the help of my scrappy producing partner, Mischa Jakupcak, I’ve secured a tiny shoe-string budget to make my epic, which spans three decades and two continents. And now I have this to worry about?

It took me almost a decade to make Potato Dreams of America. I started working on the script during the Obama administration, when it seemed that America had reclaimed its moral center and its symbolic role as a true leader in the world. This was key to how the film would be received. Integral both to my identity as an immigrant and the movie’s theme, the elusive American Dream is a powerful idea that transcends borders and inspires people to believe in the possibility of democracy, economic opportunity, individual freedom and human rights. But as we went into production, a very different president was in the Oval Office, making me question whether our own democracy would survive. So as the 2020 elections approached, I joined most of my friends in trying to make it through debilitating anxiety about our country’s future. (My choice of self-medication was Vinegar Syndrome releases – as bad as this new addiction was for my credit card, it was withdrawal-free). But – and I’m ashamed to admit it – another very selfish concern started to seep into my consciousness. Would anyone care for my cinematic ode to America if the country re-elected Trump. Would any festival program it? Would I even believe in it myself?

Even before Trump’s ascendance, I had worries about the film’s reception. Potato Dreams of America is an outsider art film owing its punk DNA to John Waters, Derek Jarman, Guy Maddin and early Pedro Almodóvar. It’s also unapologetically gay and sex-positive, relentlessly mocking the far right. But contrary to expected arthouse tropes of counterculture angst and bourgeois ennui, my life story is meant to remind Americans that they’re essentially lucky, that capitalist democracy is better than the alternatives and that faith (Christian or otherwise) is not to be ceded to zealots. Too avant-garde, too gay, too offensive for Middle America. Too earnest in its liberal worldview for the Marxist hipsters at your local cinematheque. Will anyone like this film, I wondered? But through my journey making Potato, the world kept changing – at times, adding relevancy; at others, taking it away.

When I first wrote a scene from my childhood about the time most of my classmates started to praise Hitler and chant antisemitic slurs, I thought I was documenting a grotesque distant memory from a faraway land that would strike most Americans as surreal. By the time we were in production, Trump had become the hero of White supremacists and neo-Nazis and I found myself strangely yearning for the time when that scene was just a cautionary tableau from distant Vladivostok. Now as Russian tanks roll on Ukraine and Putin has stopped pretending to be anything but an aspiring Hitler 2.0, I feel even more uneasy with my memory of that day in my Russian classroom. It was a turning point in my life, as it is a turning point in Potato Dreams of America. It was the day I (and my cine-avatar Potato) decided I would do whatever it took to leave Russia. But when your life and your film are the same, such echoes from the past can take on a sinister aura. A tiny remnant of the superstitious child in me couldn’t help wondering if I should have just kept that memory/scene to myself, lest it manifest itself in the present.

Sometimes the changing world will bring new relevance to your work in a form of unexpected laughter. In one scene, buried in my stepfather’s frothy tirade against “scary liberals” is a mention of the “government trying to vaccinate everybody.” Obviously, I did not anticipate the pandemic – the line was true to my stepfather’s beliefs and hardly memorable in 2012, when I first wrote it. But with the film having premiered in 2021 at SXSW, this bit of his paranoiac diarrhea of a rant stands out and lingers the most. Someone in the audience always laughs, recognizing today’s big moment in line written long ago.

At my most recent screening, at a theater in Seattle, I was nervous about poor attendance and weird questions at the Q&A. The turnout was good, though. As the film started, the fake snow fell over a miniature set of my neighborhood in Vladivostok. A little kid playing my alter ego, Potato, sat next to Lea DeLaria, who was playing my grandmother. Watching a violent fight between his parents, Potato put his little hands into a shape of a film frame – choosing to create and imagine, refusing to be a passive victim-observer. Suddenly, I was struck by how much I love and miss my hard-working crew and cast – my chosen family who play this make-believe with me, who trust me no matter how unconventional my vision may be. I recalled how happy and excited I was on set that day; stressed too, but in a giddy, euphoric way. I forgot about the audience until they laughed at the film’s first joke. I forgot about them, again and again. Forgot and remembered.

When the end credits rolled, I knew I’d made a movie I would have liked to see. Sure, I would have loved to make it for more than $250,000 and to release it before Taika Waititi’s hit. But it speaks to me as much today as my original script did when I first embarked on this self-inflicted quest. And how could it not? Every pixel of it is me, and could have only come from my own idiosyncratic brain. It’s eight years since I wrote the film, and some lines are funnier today. Some scenes are sadder. But I won’t worry about that. The only audience member I need to care about is a Soviet five-year-old making a film frame with his tiny fingers, as real snow falls outside.

Wes Hurley was born Vasili Naumenko in Vladivostok, Soviet Union. After immigrating to the U.S. with his mother, Hurley studied drama, interdisciplinary arts and film at the University of Washington. His autobiographical dark comedy, Potato Dreams of America, premiered at SXSW 2021 in Narrative Feature Competition and is currently available on VOD and DVD. He has written, directed and produced dozens of award-winning queer shorts, three feature films and two seasons of Capitol Hill, a series he created for the Huffington Post which went on to be picked up for television in Europe and Canada. Hurley is a recipient of Creative Capital Award, Seattle Mayor’s Office of Arts and Culture Award, City Arts Magazine’s Artist of the Year and Advocate Magazine’s Person to Watch. His documentary short Little Potato won the Jury Prize at SXSW, along with 27 other awards around the world, and is currently streaming on Criterion Channel. (Photo by Bronwen Houck.) 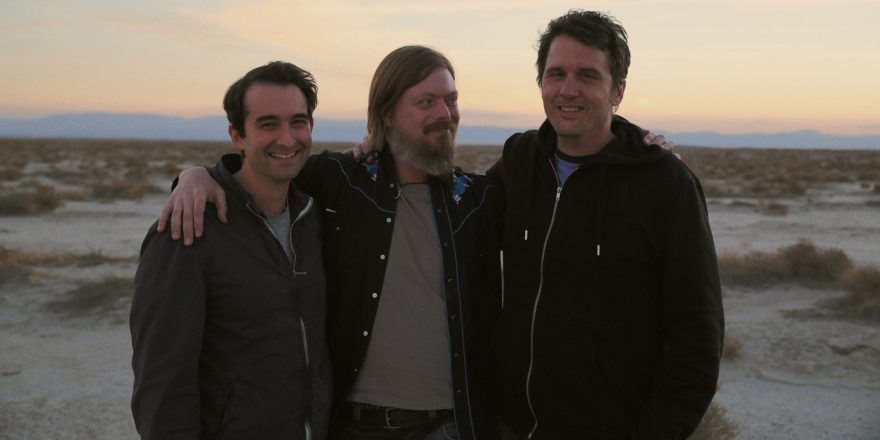 Buddies, Break-Ups and the Pitfalls of Autobiographical Screenwriting 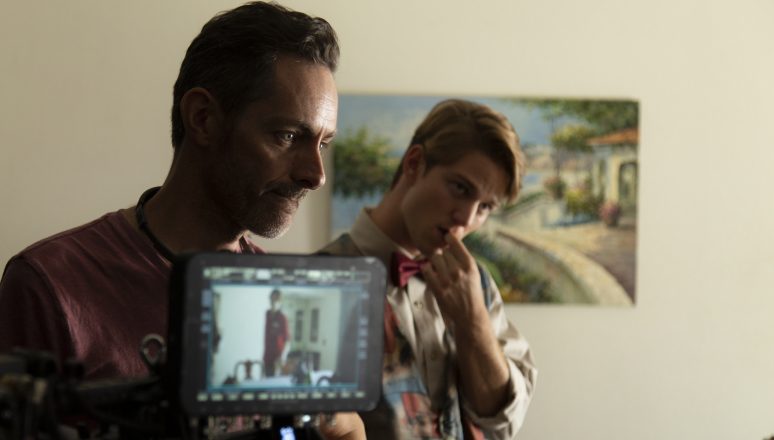 Don’t Look Now, or My Struggles with Autobiographical Filmmaking